Will Boast Reimagines the Myth of Daphne and Apollo

As speculative fiction has become more popular and “mainstream” over the past few decades, some concepts and settings that once felt fresh and new have begun to grow stale, leading a few critics to question whether we have pushed the genre to its limit. What, if anything, is left to explore?

In her debut short story collection, Jagannath — first published in English by Jeff and Ann VanderMeer in 2012, now repackaged by Vintage — the Swedish writer Karin Tidbeck destroys this pessimism with stories that feel, for the first time in a long time, truly new.

Shifting seamlessly between genres and moods, these 13 stories reject easy classification, always pointing towards the unclear and barely understood. Grounded by her beautiful and minimalist prose (she wrote the English translation herself), Tidbeck blurs the distinction between real and unreal, what is and what cannot be.

Tidbeck seems to be fascinated with places and times where the potential for magic is most present — especially the Nordic twilight. Twilight, the period just beyond day and not quite night, appears throughout her stories as characters wrestle with themselves and the fantastic.

Twilight appears first in the story “Some Letters for Ove Lindstrom,” as the narrator returns to the abandoned farm where she was raised in a commune. After remembering her childhood — her late father, her mysterious mother — she wakes to the sound of bells and a lingering twilight “that won’t go towards night or day.” Like many of the stories in this collection, “Some Letters” ends in a moment of potentiality. It makes no final movement, leaving the reader with a more encompassing feeling of the magical than a story with a neat bow.

Norway, a country with vast expanses of untamed wilderness, offers an ideal setting for stories of the hidden and mysterious. A Nordic sense of place pervades “Reindeer Mountain,” set in a small town nestled between two mountains, where the sun never sets in summer, and the nights are rife with the “eerie glow” of a sun which is “skimming just below the horizon.” These nights impose a break between the real and unreal, for brief moments allowing movement in between them.

What ultimately makes Jagannath so wonderful is that however far Tidbeck strays from reality, she never loses a powerful undercurrent of human empathy. In a coming-of-age story set in an alien flesh ship, or the story of a man who wants to be a bumblebee, Tidbeck creates moments of uniquely human truth. In a story about the tepid love affair between a man and a zeppelin, for instance, a woman likewise in love with a steam engine explains that “infatuation is worth nothing. It has nothing to do with the real world.” And in “Cloudberry Jam,” a child made in a tin can asks his mother, “why did you make me?” And she replies, “I made you so I could love you.”

Tidbeck rejects the confines of our earthly understanding. The immense imagination and human essence of Tidbeck’s worlds have the power to unsettle, if only for brief moments, a reader’s sense of reality. Staying up late, unable to put this book down, I felt again the wonder of discovery I remember from my first steps into Le Guin’s Earthsea or Mieville’s Bas-Lag. Like the protagonist of Tidbeck’s story “Augusta Prima,” I was driven towards further exploration, toward asking, “What is the nature of the world?” And Tidbeck answered my query by asking in turn, “Which world?”

The Horror Behind the Mask in “Night Rooms” 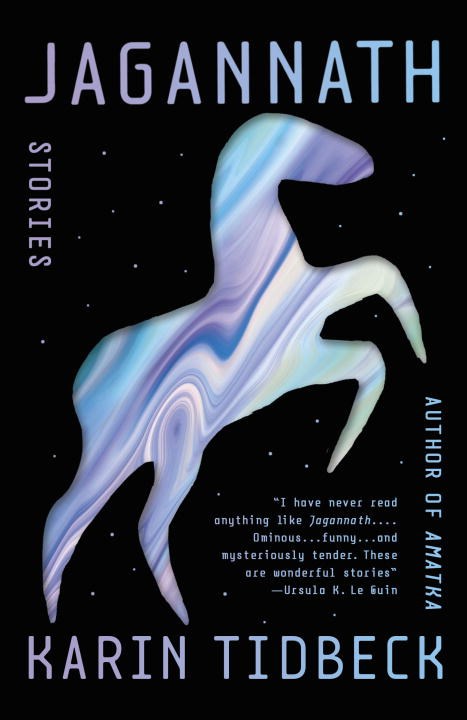 Karin Tidbeck is originally from Stockholm, Sweden. She lives and works in Malmö as a freelance writer, translator and creative writing teacher, and writes fiction in Swedish and English.

‘The Dark Dark’ Is Full of Sex, Death, and Magic