‘The Afterlives’ Is a Hilarious Novel About … Death

Many Doctor Who fans lost their minds when the next iteration of their beloved Time Lord was announced to be a woman. The Doctor, an alien who travels through time, changes his or her appearance whenever an actor’s contract happens to end, but since the show’s debut in 1963, all twelve actors have been male.

The notion of creative “canon” can serve as a convenient shield for prejudices and projections. This is, of course, not limited to women replacing men, and throughout history, audiences and critics alike have allowed their prejudices to shape their experience of art — as well as who is allowed to participate in that experience, whether as a spectator or performer.

This is why the story of 19th-century actor Ira Aldridge, as told by Lolita Chakrabarti in her award-winning 2012 play, Red Velvet, remains so relevant. In Red Velvet, Aldridge replaces Edmund Kean after the latter falls ill during a performance of Othello. Though his impassioned, untraditional performance as The Moor wins over the audience, theater critics trip over themselves to denounce Aldridge, a black man, performing on Covent Garden’s stage.

Though some scenes are dragged down by bloated dialogue, Chicago Shakespeare Theater’s Red Velvet (now through January 21) succeeds in demonstrating how prejudice, hatred, and the precious treatment of revered works, ultimately robs audiences of art’s humanizing effect. 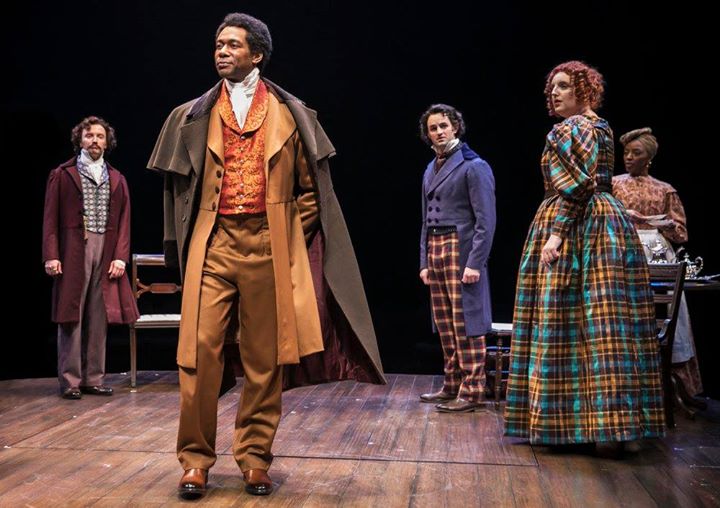 The majority of Red Velvet takes place in 1833, the year England would vote to abolish slavery. However, the play begins in Eastern Europe during what would be Aldridge’s last tour. The time travel is framed through an admittedly overused narrative. Aldridge (played by Dion Johnson) is ambushed by an ambitious Polish journalist who we later learn is the only woman in her newsroom. As he begins to tell her the story behind his brilliant but limited run as Othello at Covent Garden, we transition to 1833. However, this is later redeemed as Halina (Annie Purcell) shares her own story of oppression with Aldridge, drawing a parallel between his frustrations as a talented actor limited by the color of his skin and her struggle pursuing a meaningful career in journalism.

Newspapers play a critical role throughout Red Velvet. There is an especially effective moment in the second act when Edmund Kean’s son, Charles (Michael Hayden), reads the first reviews of Aldridge’s performance. There is an elegant rage underlying the composition of this scene. Charles is positioned to face the audience and what he reads lays bare the dehumanizing racist ideology popular enough to be printed across multiple newspapers in 19th-century London. It is impossible to do the scene justice in this review.

Aldridge is a practitioner of a more physical style of acting, one that opposes the popular “Teapot” method (imagine a very serious man in all black palming a skull and very seriously reciting, “To be or not to be” without moving). He shares his reasoning behind adopting this style with Ellen Tree, a legendary stage actress who was playing Desdemona, Othello’s ill-fated wife. Tree reluctantly experiments with moving around the stage and finds that it works for her, that, in fact, it makes her a more effective actress. This would ultimately work against Aldridge, as many of the critics, and all of the theater board members, were especially offended by how he touched Tree during the performance. Othello strangles Desdemona and seeing a black man murder a white woman they’d seen killed many times by a white man in black face was too much for the London intelligentsia.

Red Velvet is a Shakespearean tragedy. It leaves you wondering whether Aldridge’s life would have gone in the same direction, banished to far-away continental theaters, had he not been so good.

While there are still debates in dusty academic corners about the race of Othello as intended by Shakespeare, it is generally accepted that Othello is a black man. When I started to outline this review (i.e., procrastinating), my self-abusing brain demanded I visit Twitter where I saw this tweet from Joyce Carol Oates:

"Othello" is a great enough work of dramatic art that, if the racial element were entirely removed, the play would still be a profound accomplishment. That Othello is a "Moor" could be made–almost–irrelevant. (Disagree?)

It upset me. Not because I feel a particular affinity towards Othello or maintaining its original integrity, but because Othello’s race has always been an essential part of how the work has been performed. If his race was truly beside the point, why have dozens of white actors have put on blackface to portray The Moor in the past?

It might be beside Oates’s point (there were plenty of well-informed responses that took her to task where I cannot), but it’s a good reminder why Aldridge’s story is still important.

Now only one cat (😿). Still too many books. @ecreipsmith

Immortal Longings in “The Stars Undying”