‘The Doll’s Alphabet’ Is a Stunning Work of Feminist Horror

Critic and iconoclast Dave Hickey offers both a definition and an appreciation of the term “slow art” in an interview with BOMB Magazine. Inveighing against “art designed for the attention span of AM radio,” he declares, “I want an image that I can keep looking at, some kind of sustained eloquence, an image that perpetually exceeds my ability to describe it.” That classification, presented back in 1995, has, if anything, grown more resonant as so much of the culture has run full-speed into the Internet-cultivated territory of quickness and disposability.

Chicago-based poet Eric Plattner’s latest handmade, self-released, limited edition chapbook, the holoscopes, is one of the most sustainedly eloquent pieces of art I’ve encountered in 2017. Both the object and its contents may well exceed my ability to describe them, but I’m going to give it a try.

Bound stenographer’s-notebook-style with a plastic coil across the top, the 28 poems, dated April 19 to May 16, correspond to an unnamed historical event whose spectral traces haunt the pages. Some astute readers might figure the reference out, but the allusion remains deliberately unspecified and the collection’s about-ness remain capacious. 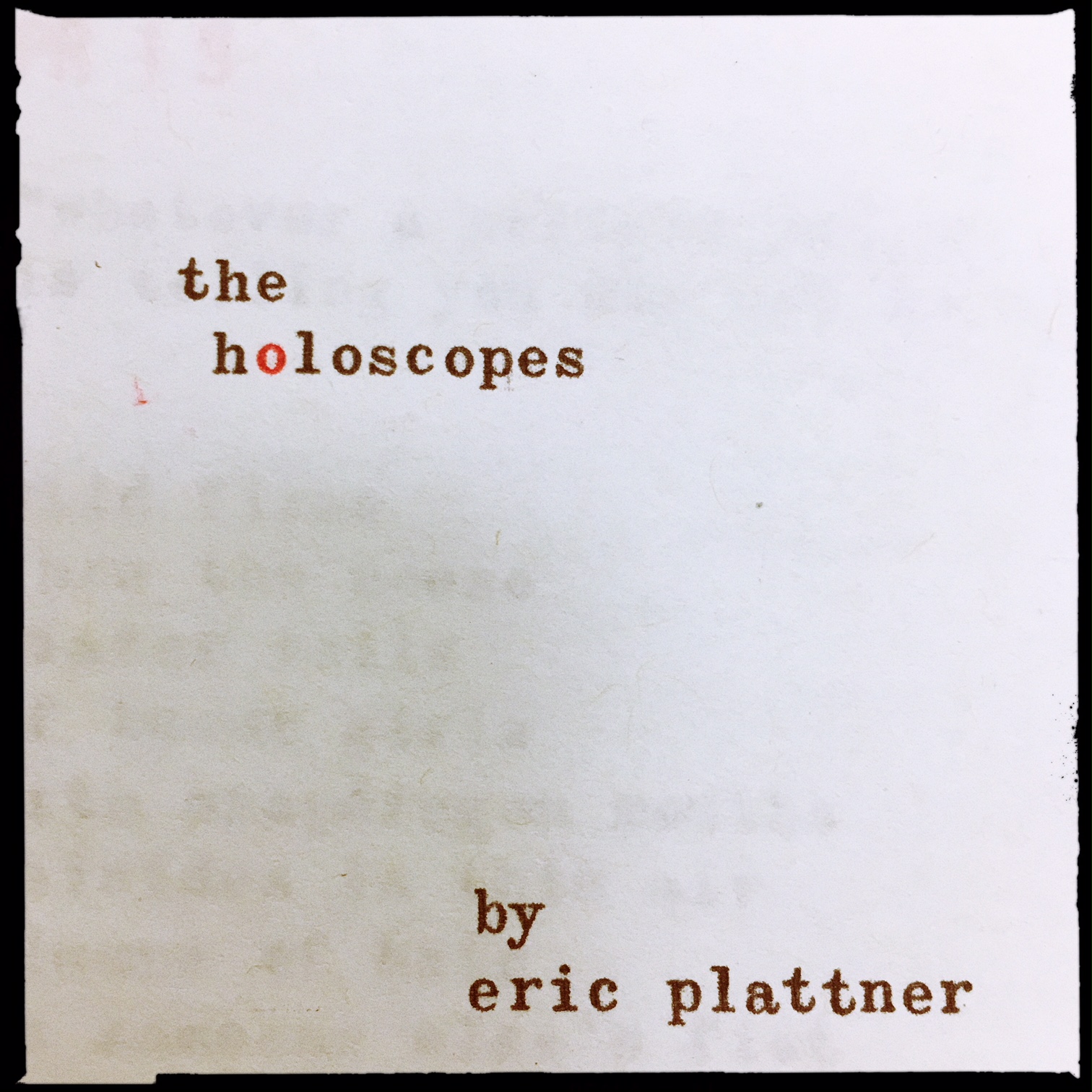 The “holo” of the title evokes an array of associations: the horrors of the Holocene, this era in which human life has come to negatively impact the entire planet; the atrocities of the Holocaust; the word “holistic” and the idea that these poems both stand alone and create an arc. The poet wisely lets the book contain all of them without being limited to a single one.

So, too, does the word “holoscope” call to mind “horoscope”—a forecast of an individual’s future, often including a delineation of character and circumstances, based on the orientations of the stars and planets at the instant of that person’s birth. Fittingly, the poems speak in a knowing and fatalistic voice. “the world / is swarming / with future victims” reads the holoscope for the date of May 7, “i can’t remember why / they brought us here.” Date-stamped in the fashion of a day book or diary in block capitals and red ink, each poem, typed in black, has an imperative (albeit difficult to obey) title: “don’t worry about the rumors,” for instance, and “remain detached,” and “do not overreact.” 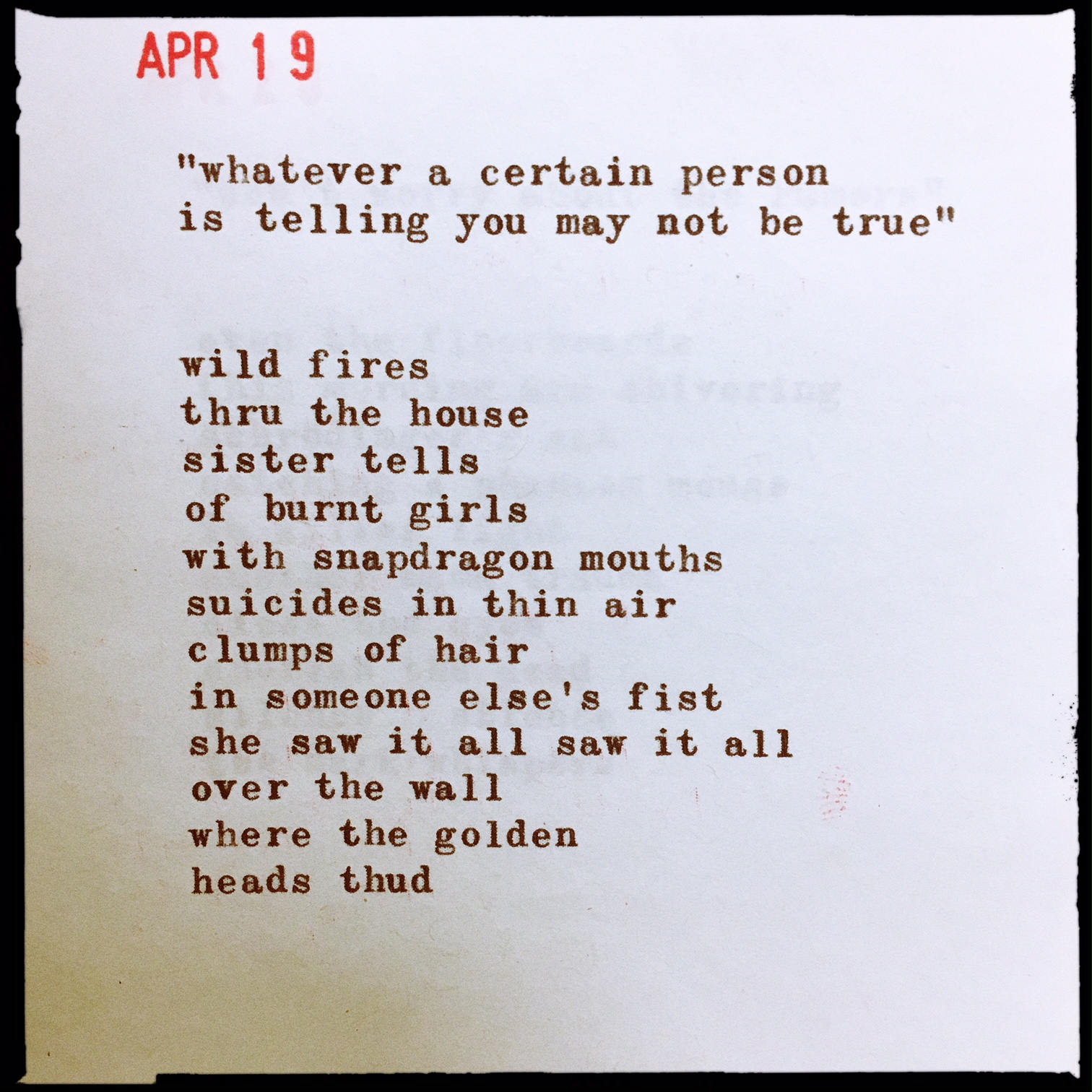 Along with Dave Landsberger, Eric and I are founding members of Poems While You Wait, a team of poets and our manual typewriters, who set up our machines in various public places—street festivals, flea markets, public libraries, art museums, planetariums, storefront theaters, and so on—and write commissioned poetry on demand. Customers give us a topic, $5, and about ten minutes, and we give them an original, one-of-a-kind, typewritten poem. 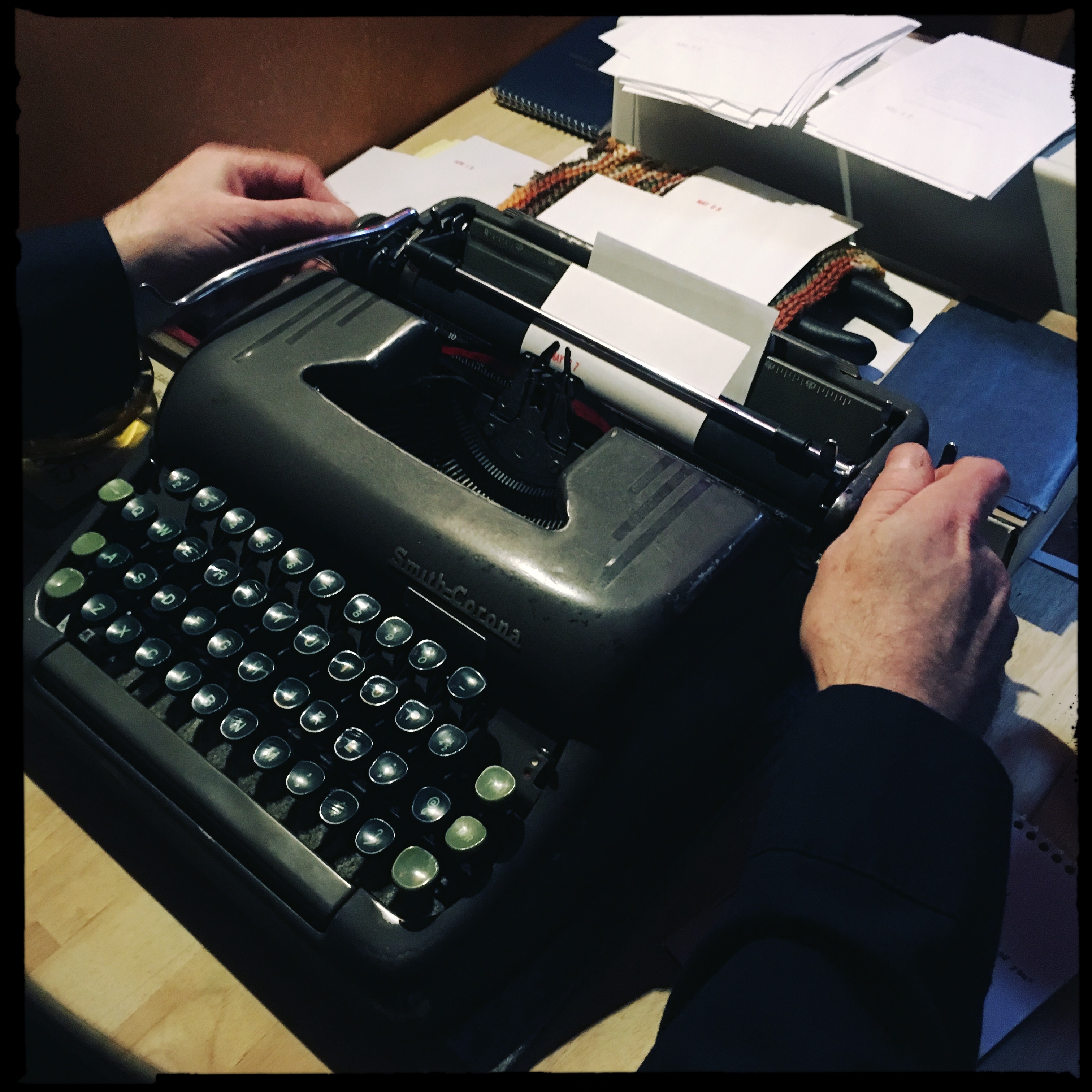 the holoscopes are both an extension of and a departure from that project. Whereas PWYW prizes improvisation and spontaneity within a particular moment, the holoscopes were drafted, re-drafted, and honed by typewriter over a period of months. And although every copy of the holoscopes gets typed by hand at Eric’s kitchen table, that process is repetitive and unhurried, much more purposefully painstaking than scanning the pages and sending them to a printer. Also, Eric charges no fee for the chapbooks, but rather has chosen to give them away for free to anyone who asks. 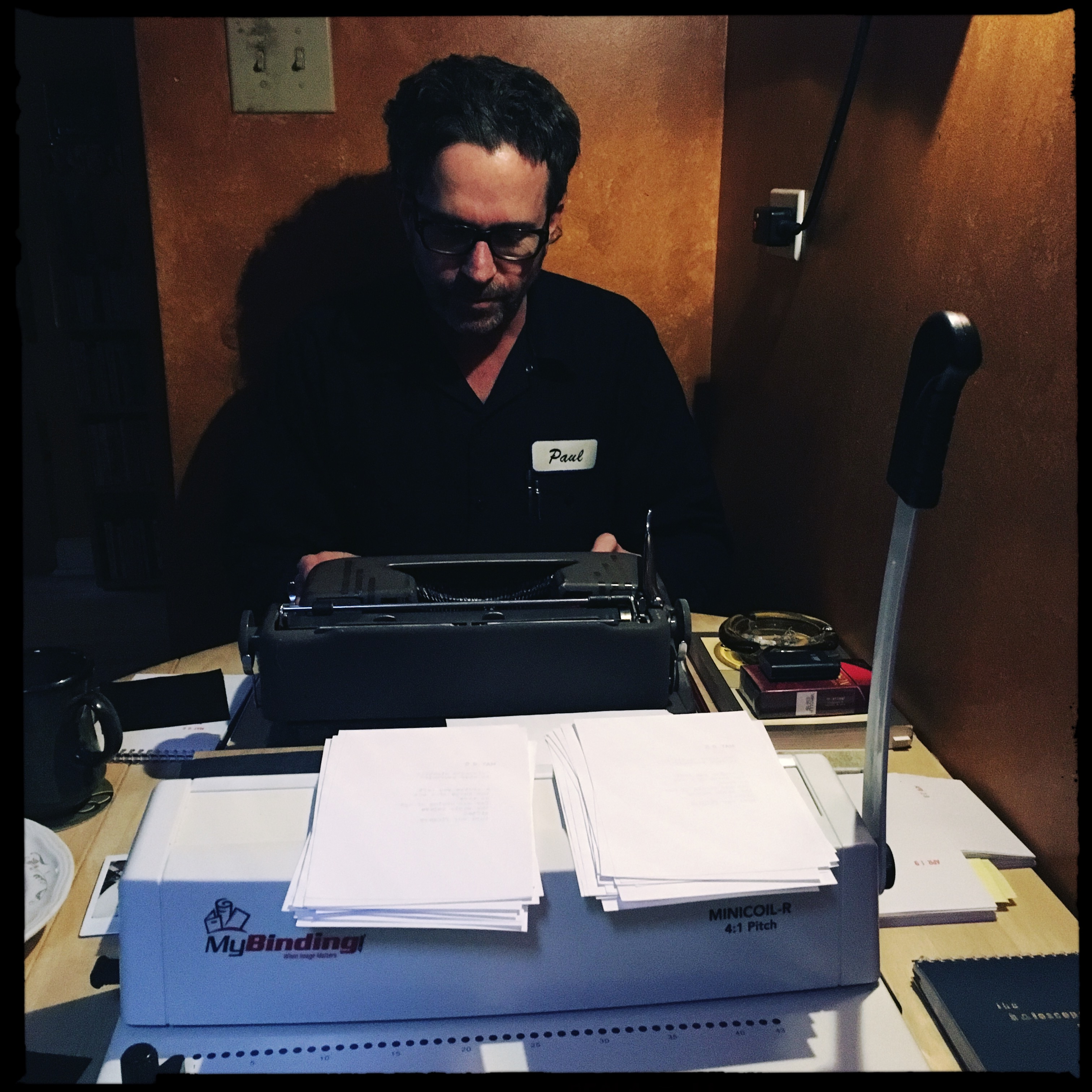 Out of an enduring commitment to patience and care, Eric has turned his peaceful and dimly lit kitchen into fully functional home press. There, he uses carbon paper to produce two copies at a time of each poem before binding the books between a front cover that he meticulously stamps with coppery ink, and a back one that he illustrates inside with a blue seal and outside with a photograph. He joins the front and back covers and the thin, pale pages in between using a small hand-cranked hole-punch and binding machine.

The beauty of the book itself as an object creates an artful tension with the grimness of its imagery and subject matter. Such fragments as: “the wind / carries pieces / of us far & wide” suggest the smokestacks of concentration camps and the grit of pollution, and the color “blood orange” evokes fire and flames, as does “brickdust colors,” while “something grinding something / up in the sky” gives the pieces the texture of something particulate and burnt. Further tension arises from a sense that the poems can be read simultaneously as being about history and about the inevitable and anxiety-laden future: “if only / you could tilt / the earth back / to its solstice / our hot breath / on icy windows” and “going going going / the robin sings.”

The last poem in every one-of-a-kind copy is called “your eyes will tell the story,” but the poem itself changes from chapbook to chapbook, not that a reader would ever be able to tell quite how. The body of the poem is completely x’ed out, evoking dead eyes.

And that exquisite perverseness—that call to look and look again, but never fully see—is part of what holds the reader’s imagination and gaze. It invites one to keep returning.

In the aforementioned interview, Hickey explains beauty in part as a mechanism that “creates conditions under which we might voluntarily look carefully at something.” If that is the case, then Eric Plattner’s the holoscopes afford an inarguable beauty. Drop him a line at Ericplattner@gmail.com, ask him for one, and see for yourself.

A founding editor of Rose Metal Press and a founding member of Poems While You Wait, Kathleen Rooney is the author, most recently, of the novel Lillian Boxfish Takes a Walk (St Martin’s Press, 2017). With Eric Plattner, she is the co-editor of Rene Magritte: Selected Writings (University of Minnesota Press, 2016). She teaches at DePaul University. Follow her @KathleenMRooney.

A founding editor of Rose Metal Press and a founding member of Poems While You Wait, Kathleen Rooney is the author, most recently, of the novel Lillian Boxfish Takes a Walk (St Martin’s Press, 2017). With Eric Plattner, she is the co-editor of Rene Magritte: Selected Writings (University of Minnesota Press, 2016). She teaches at DePaul University. Follow her @KathleenMRooney