A Poet Reflects on the Horrors of America 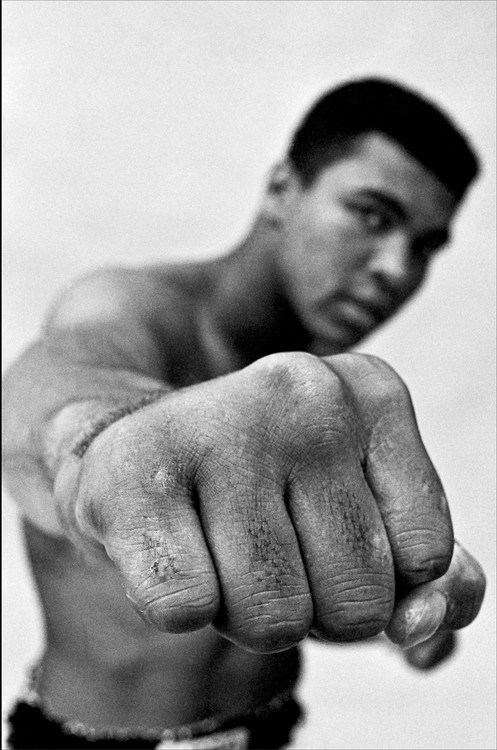 Muhammad Ali was an extreme extrovert. He charged up his enormous energy for life from being around other people, for the most part those who worshipped or indulged his charming egomania.

That personality type — which happened to come attached to one of the most unique and beautiful heavyweight fighters of all time — combined with his wonderful playfulness, sense of humor, and genuine human friendliness, allowed him to get away with actions that would have ruined in a night the lives of lesser men.

A new biography by Chicago writer Jonathan Eig, Ali: A Life — the first unauthorized biography of its kind — arrives at an auspicious moment in American history, when, as the Nobel Prize-winning author William Faulkner put it: “The past isn’t dead. It’s not even past.”

There was a lot more to the complicated, contradictory man — who first became famous fighting under his given name, Cassius Clay — than his unorthodox lifestyle. Eig’s book, a deeply researched, simply styled study, makes a game effort at telling the whole story, leaving out the judgment while presenting many colorful vignettes of the man’s life, uncensored.

One of the biography’s central themes projects the boxer’s numerous political postures against a backdrop of the flashing, neon-lit social issues of the 1960s, which boiled down to the old problem of race in America — particularly where they intersected with black pride and black empowerment.

It is here we see most clearly that America’s past is still alive, recognizing with a sense of astonishment — or knowing weariness — how tight the parallels are between Ali’s social consciousness and famous black athletes of today, protesting systemic inequality and the twin issues of law-enforcement and justice-system brutality against black Americans.

Where today, more than 50 years later, we see a movement gaining better and more widespread traction than in Ali’s time, we see also Colin Kaepernick, the movement’s spearhead, quietly blackballed from the National Football League on the grounds that his activism is too controversial, too political and “anti-American” to merit risking his name on an active roster.

The debate today has transcended sports, in fact nearly flooding the already busy channel of mainstream dialogue, and we can see again great blocs of Americans, perhaps analogous to what former President Nixon described as the “silent grassroot masses,” swearing off both the N.F.L. and the National Basketball Association, where the movement has spread. Since these protests, staged during the playing of the national anthem, are most active among young, now-wealthy black men, the counter-protestors have claimed they will return to watching organized team sports when these athletes better learn their place, and begin evincing an unalloyed gratitude for the country that has given them so much.

It is the same old story, with many Americans demanding their black athletes come one way: Wonderful physical specimens to watch play games, but silent, submissive, and grateful for the opportunity afterwards.

Ali’s famously defiant quote of black independence and freedom could seemingly be transposed to any protesting athlete today, though not always the part about Ali’s legendary cockiness.

Eig’s biography, assembled from hundreds of source materials and interviews with dozens of Ali’s long-quiet associates, avoids simply revisiting the surface of his famous refusal to be drafted to fight in the Vietnam War, or his on-again-off-again claim that the races would be happier if they were segregated. Instead, the standout stories are those of the shy, sensitive, perceptive kid from Louisville who, with a natural love for human beings in his heart, was given an early and rough introduction to the racial realities of America.

“For young Cassius Clay, it would have been impossible not to notice that there were, in essence, two Louisvilles: one for blacks and one for whites. For blacks, the best schools, best stores, and best hospitals were off limits. So were most country clubs and banks. Black moviegoers were permitted in only a handful of the big downtown movie theaters, and even then only in the balcony . . . . According to his mother’s recollections, Cassius quickly made a merciless judgment: that the world was for white people.”

Later, we learn that young Clay, the grandson of a former slave and named after a white senator from Kentucky who was critical of slavery, wept in bed when he began to understand skin color was the reason he and his fellow black Americans were made to suffer by white Americans. He had always been proud of himself, his family, his skin, and even his sonorous name, and the meritless denigration left a permanent scar.

These questions of identity followed Ali throughout his life and surfaced repeatedly, though inconsistently, in expressing his own beliefs about the meaning of race in America. The many poses he struck over the decades — despite their often shocking patriotism — are best viewed through the lens of his justifiable contention that if black people were considered less by white people, then he thought the same of them, too, without any apologies needed.

Against the United States and white America, Ali often painted the big picture, and it was a damning portrait indeed. Eig quotes Ali:

“Well, we weren’t brought here to be citizens in white America. The intention was for us to work for them — and like it. They mated us up, the more the merrier. The big black slave was called the buck. ‘This nigger slave can breed fifteen babies a month!’ And as soon as the baby was born, it was separated from the mother. And that was the making of your ‘negro.’ He was a mental slave. And that’s the people we still have in America today.”

Ali had in common with today’s protestors the fact he made his love of country apparent, while also making it clear he wanted the nation to live up to its grand promise. At the 1960 Rome Olympics, Cassius Clay’s patriotism was front and center. Asked by a foreign reporter if there was a “crisis for negroes” in the United States, Clay responded:

“Oh, I guess there are some troubles,” he said. “But nothing you can’t fix. And the United States is still the greatest country in the world.”

He arrived back in Louisville, Kentucky proudly wearing his gold medal, and recited a poem:

To make America the greatest is my goal,
So I beat the Russian, and I beat the Pole
And for the USA won the Medal of Gold.
Italians said, “You’re greater than the Cassius of old.”

At other times, Ali was both patriotic and critical during the same conversation. Meeting with a group of army sergeants (Ali by this time had on several occasions expressed regret for the very statements on the Vietnam War that helped made him a Civil Rights icon) Eig again quotes the champ:

“At one point, he struck a patriotic chord, saying, ‘No country is as great as America. Even our smallest city is greater than any country in the world.’ At another point, he argued that America deserved many of its problems. ‘This is a country based on lies,’ he said.”

But over the course of his long life, he was never inconsistent in his love for people. In all of the stories and anecdotes about Ali, you will not find incidents of him being personally unkind to anybody of any race. Ali could break your heart with acts of pure kindness, an ability and tendency he had all of his life, something that seemed innate within him.

One of the finest stories in the book involves a father and son. The father, Henry Sadlo, a white attorney from Louisville, had been the Clay’s first family counsel. He had helped  Ali’s father Cash out of a few jams, a boozer and rogueish courter of women who was jokingly called “Dark Gable.” He had also been Clay’s attorney in the early professional days, drawing up his contracts and watching out for his interests before the family moved into the big time and necessarily bigger counsel.

The son, Frank Sadlo, had arrived many years later at the Clay’s Louisville homestead, and found that Ali, the worldly figure, was inside having breakfast. Mrs. Clay, recognizing Frank immediately, invited him inside and re-introduced him to Muhammad, who had known Frank as a little boy. His father, Frank said, was in the hospital about to undergo triple bypass heart surgery with a valve replacement.

Before Frank could even ask the question — would Muhammad be willing to visit? — Ali put down his spoon, pressed both his fists into the tabletop, and pushed himself up out of his chair.

All of his life, Clay, and later Ali, had kindness in his heart for strangers and friends — and to meet Ali was to become his friend. That fact, alongside a thousand other contradictions and harmonies, was the core of Ali, the man writ large. His third wife, Veronica (he had multiple women in his life at all times, and several others with valid claims to child support), said he possessed “the kindest, most pure heart of anyone I know.”

Eig’s book is a fine read on the great boxer’s life, taking him on as he was and always seeking the truth that hits closest to bone. It covers the tumultuous middle, and then the oddly sanitized and bland second half of the American Century, an era in which Muhammad Ali was among the biggest and brightest players on the stage — living a life that, far from signifying nothing, will in its outrageous grandeur and stunning humanity, stand the test of time.

Phallocentrism and the Phoenix in “Burning Man”