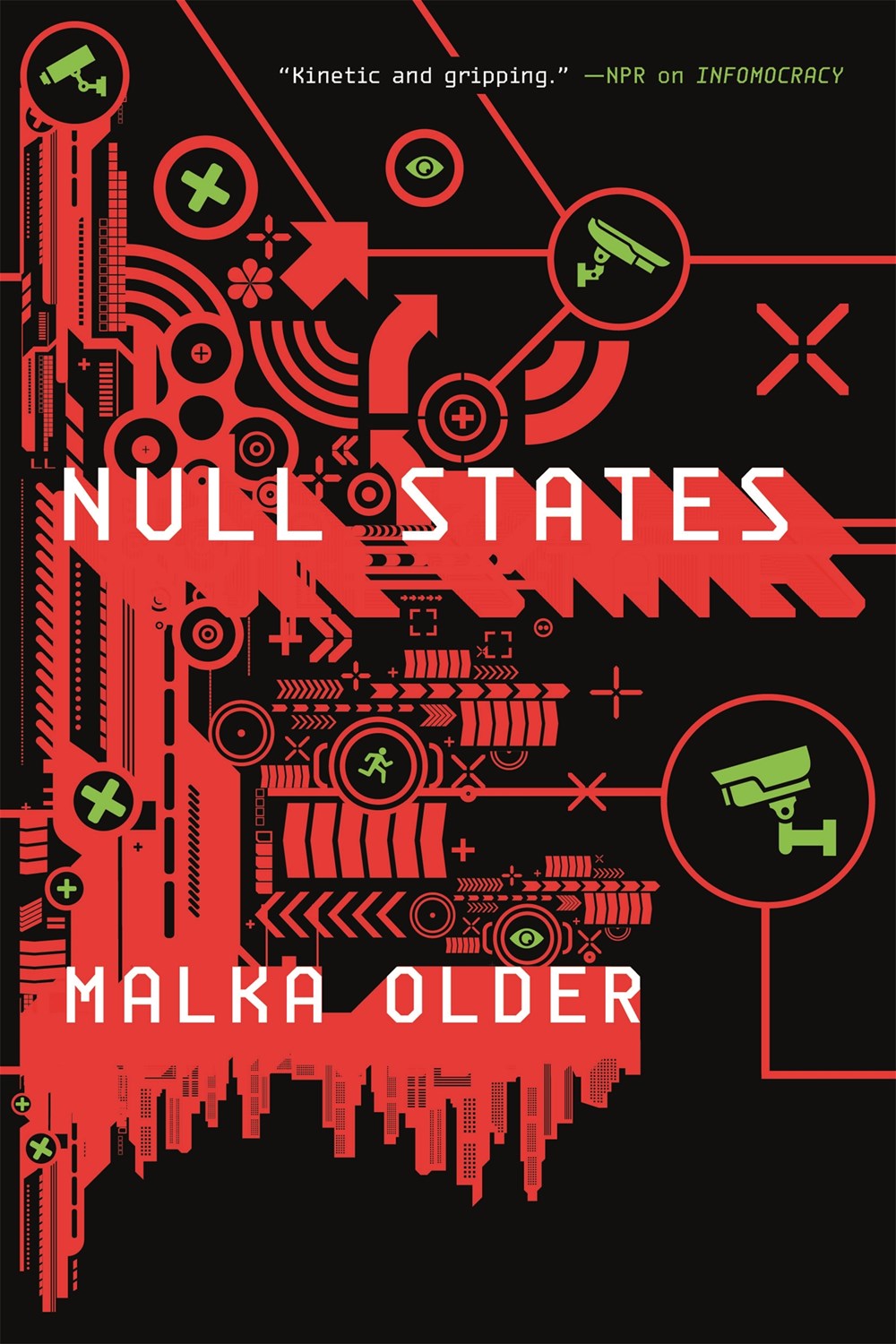 We are drowning in politics. Political headlines rear up to shock us every morning. Political outrage floods social media. Political debates threaten family gatherings and unify disparate groups under common banners. But as we slog through the hot takes, it can be hard to take a step back and get perspective. We’re so overwhelmed by what’s happening that we forget to ask why it’s happening in the first place.

Malka Older’s Null States is a riveting science fiction thriller that brings the future of democracy to vivid, divisive life. In doing so, it illuminates the fundamental trends that are reshaping the world today. Masterfully channeling tech geekery and policy wonkery, Null States is the second entry in Older’s Centenal Cycle, continuing the story Older started with her critically acclaimed debut, Infomocracy.

In this particular future, traditional geographic borders have broken down and most of the world is organized into “cetenals,” polities of one hundred thousand who can elect whatever government they choose, regardless of their physical location. This system, dubbed micro-democracy, allows for distributed governance where citizens can elect leaders and enact highly specific policies. If you don’t like the results in your particular centenal, no problem, just move to another one you prefer.

Given the current state of the world, this sounds like a pretty sweet option.

But micro-democracy is predicated on Information, a massive, shared bureaucracy that provides the technical, electoral, and accountability infrastructure this new world order requires. If governments were individual websites, Information would be the telecom conglomerate installing and maintaining the fiber optic trunk lines connecting cities and continents.

When Information itself is threatened, Null States’ diverse cast of spies, power brokers, hackers, consultants, and assassins struggle to untangle a complex web of ambition and intrigue that undermines their foundational assumptions. These characters are a delight to spend time with. At turns, they’re hypercompetent and vulnerable, sarcastic and sweet, fierce and flawed. More than anything, they feel like real people and I turned the last few pages with the prescient nostalgia of preparing to leave behind a group of dear friends after a shared vacation.

Null States denizens surf data with unthinking fluency, doodling algorithms as easily as we trade texts. Transported back through time to explore our contemporary world, they would immediately grok how the internet and global economy are eroding the traditional role of nation states, resulting in political, economic, environmental, and humanitarian upheaval. As a governance researcher and longtime humanitarian aid worker, Older is intimately familiar with the implications of these underlying trends (read my in-depth interviews with her here and here). That intimacy allows her to conjure a geopolitical crisis as deftly as the aroma of Darfuri street food, which makes for fast, fun, and thought-provoking reading.

In relational database programming, a “null state” describes something that does not exist in the database. Unlike zero, which implies evidence of absence, a null states indicates absence of evidence, an unknown unknown. In Older’s novel, null states are those laggardly countries that steadfastly refuse to join Information’s micro-democratic system, and are therefore off-grid and largely disadvantaged.

Seduction is Performance in “Acts of Service”

But the title is also a thesis about the world we live in right now. It puts our political institutions under the microscope, and reveals a fractal network of spreading cracks. So instead of losing yourself in vitriolic headlines, pick up a copy of Null States. Reading it will help you get past what and make sense of why. Plus, it’s a hell of a good story.

Eliot Peper is the author of Cumulus, True Blue, Neon Fever Dream, and the Uncommon Series. His books have been praised by Popular Science, Businessweek, TechCrunch, io9, and Ars Technica, and he has been a speaker at places like Google, Qualcomm, and Future in Review. Eliot is an editor at Scout, maintains a popular reading recommendation newsletter, and advises entrepreneurs and investors on technology strategy.

Eliot Peper is the author of ten novels, including Bandwidth, Veil, Cumulus, and, most recently, Reap3r. He publishes a blog, sends a newsletter, and tweets more than he probably should.

In Malka Older’s ‘Infomocracy,’ Data is Your God