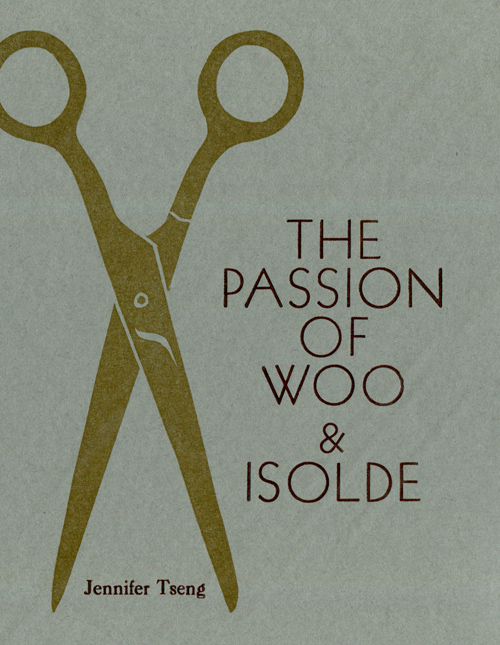 I found Amelia’s Gray’s introduction to Jennifer Tseng‘s new collection from Rose Metal Press, The Passion of Woo & Isolde, to be apt, especially when she writes that the book  “comes to us as a sparkling set, doing the rare business of working singularly and within each of the three parts and in the triptych as a whole. Together, they light the room.” At 24 flash pieces, there’s an illuminating quality to the work, as a whole, and I was struck by how, with just one moment or line or even word, these short pieces could be so revelatory.

Jennifer Tseng was kind enough to talk with me about this new collection, her writing, and her obsessions.

Timothy Moore: Reading The Passion of Woo & Isolde makes me wonder: Did you find this to be a different experience writing flash as opposed to a longer work, like a novel? And did you find you had different expectations for your writing, with the limited space of the medium?

Jennifer Tseng: I made The Passion of Woo & Isolde from pieces I had in a drawer, pieces that, for the most part, I’d never sent out. One day I was feeling especially poor & so to make myself feel better I made a mental list of my assets. It was a short list, but one of the items was work I’d been holding.

The very next day, I saw the Rose Metal Press Chapbook Contest announcement which had a deadline of the following day. I told myself if I could make a chapbook in twenty-four hours, I would enter the contest. So it wasn’t just limited space, it was limited time too. These limits prevented me from having many expectations. I didn’t know what would happen when I put the pages on the desk but eventually, I found a shape for them. They seemed, weirdly, to belong together. I suppose intuitively I was aware of the shape lurking in the drawer. The ghost of the book had been keeping me company for years. And because I’m so obsessive and write about the same things over and over again, I was able to add a few new things without too much difficulty. The experience was very different from writing a novel — swift (though of course I had been doing the work slowly for years without knowing it) & a bit reckless & liberating, like diving off a sea cliff rather than climbing a mountain in search of a new view. If it weren’t for Rose Metal Press, which is devoted to publishing hybrid forms, the stories would still be little ghosts in my drawer.

Timothy Moore: I’m so glad that you mentioned ghosts, Jennifer, as it helps with my clumsy segue! Many of the characters here seem “haunted” – by their pasts, by their exiles, but, most of all, by their passions. It seems too that these passions come out in unexpected ways, like how a character named Woo, so enthralled by the poem he’s reading, thoughtlessly “plunged his left hand into a pot of boiling water in order to pull the noodles out while holding the book of poetry with his right.” It’s not until he finishes the poem (about love!) that he realizes the damage done to his hand. Would it be fair to say that passion, and, really – unexpected passion, is one of your obsessions?

Jennifer Tseng: Although I’ve never had the conscious thought, I think you’re right. So many of my obsessions are unknown to me! Maybe because I keep secrets from myself, I’m interested in characters whose desires surprise them. After I published my novel Mayumi & the Sea of Happiness (another character whose desires surprise her), I started teaching a class called, “Writing the Forbidden” & it really wasn’t until then that I realized almost all my favorite poems, stories & novels contain an element of the forbidden. My reading history reveals this obsession to be longstanding, but I’d somehow kept the information a secret from myself. Another person might just call me not very self aware or worse, estranged from my own desires. But is it just me? Isn’t everyone constantly surprised by their own desires?

Timothy Moore: I feel like being surprised by one’s desires is something that happens a lot with people (it certainly happens with me!), which makes these stories so universal, even when they touch on the uncanny. Another part of this desire that I found fascinating (and true) is how it’s so difficult to make connections with these passions.

In the second section of your collection, there’s a focus on this couple, Woo and Isolde, that seems doomed to fail. After seeing so much of Isolde from Woo’s perspective, we get to learn about this rich, complex (and spiritual) tapestry within her, one that Woo isn’t privy to. Can you talk a little about this section and the fundamental differences between these two? And, with that in mind, do any of us have a chance out there?

Jennifer Tseng: This section illustrates why I became a writer. While it’s a wildly fictionalized version of my parents’ relationship, my drive and stance as a writer have been informed by having witnessed, over a period of many years, on a daily basis, similar chasms between people. For example, my mother loves word games, puns, jokes involving language etc. When our father was at work, she often taught us Mandarin phrases, made up words that combined Chinese and English or teased us affectionately in a way that revealed her knowledge of Mandarin. Meanwhile, one of our father’s most commonly uttered laments was, “Your mother used to know Chinese. Never practiced. Forgot everything.” Forgive the cliché, but they were like two ships passing in the night. Each of them contained multitudes — faces, memories, elaborate systems, fancy rooms — unknown to the other. My sister and I were like sea gulls flying between them.

I think we’ll all have a better chance out there if, instead of trying to erase or ignore difference, we pay attention to it. Watch the ships closely as they pass. Study their engines, their itineraries, their search and rescue patterns. Listen to the sound of their horns. Ask questions. Embark. Engage in conversations with the passengers. Spend some time floating on a strange sea.

Timothy Moore: I feel like looking at the world this way would lead to a very rewarding life! It seems like so much of your writing is about paying attention, to people, or to surroundings, or, again, to one’s desires. Do you think being a writer has trained you to become more observant? Or perhaps it’s the opposite, and being observant led you to becoming a writer?

Jennifer Tseng: If I’d been born into another family, I don’t know that I would have become a writer. My family (in particular my father, with whom I strongly identified) gave me so much to observe. Early on, I faced the question of what to do with all my observations. What to do with everything I had witnessed? Where to put it all? What to make of it? What to make with it? The yelling, the silent treatments, the calculations and punishments, the near misses, the misunderstandings, the threats, the estrangements. Writing was a way out, someone to talk to, a clean slate I could fill with my side of a many-sided story. It was proof and clarity, company and argument, alchemy and sometimes even beauty. It was a way of turning agony into music.

Timothy Moore: Growing up, were there certain books that you turned to that helped shape you as a writer? And what are some of the books that you’re reading now?

Jennifer Tseng: When I was growing up, Sigrid Nunez’s A Feather on the Breath of God had a huge impact on me. Chang and Christa were precursors of Woo and Isolde. This was the first time I’d encountered a literary family that even remotely resembled my own. German mother, Chinese Panamanian father, three girls. Nunez was also one of the first writers I read who was clearly intent on telling more than one side of a story.

Li-Young Lee was important to me too, especially his memoir, The Winged Seed, and his second collection, The City in Which I Love You. Both Nunez and Lee were writing about things that interested me—immigration, racial identity, cross-cultural relationships, the perils and pleasures of language, the question of what’s saved, whose stories are salvaged—and they were writing exquisitely. Prior to reading them, I’d often relinquished reading urgent content in favor of reading exquisite prose/poetry or relinquished reading exquisite prose/poetry in favor of reading urgent content. These writers were writing exquisitely about things that mattered urgently to me and that was thrilling. Marguerite Duras was another important early influence. Her study of intersections of race and class, her complex portraits of power, cut me to the quick.

I just finished Marie Ndiaye’s My Heart Hemmed In. It’s brilliant. Although the characters and settings are different, it feels very much like a continuation of her novel Ladivine (though it precedes Ladivine), a modern day passing tale set in France. In My Heart Hemmed In, Ndiaye expands her moral interrogation of race passing to include other forms of passing as well. It’s a chilling, psychological portrait of a self and her relationship to self and other. An absolute nightmare, utterly convincing and devastating.

Now I’m reading Jennifer S. Cheng’s book of poems, House A which is at once wildly audacious and incredibly soft and gentle. It’s great company. Two books I never get tired of are Hannah Sanghee Park’s The Same-Different and Sandra Lim’s The Wilderness. I go back to them again and again. They never cease to impress and inspire me.

The ABCs For The End Of The World