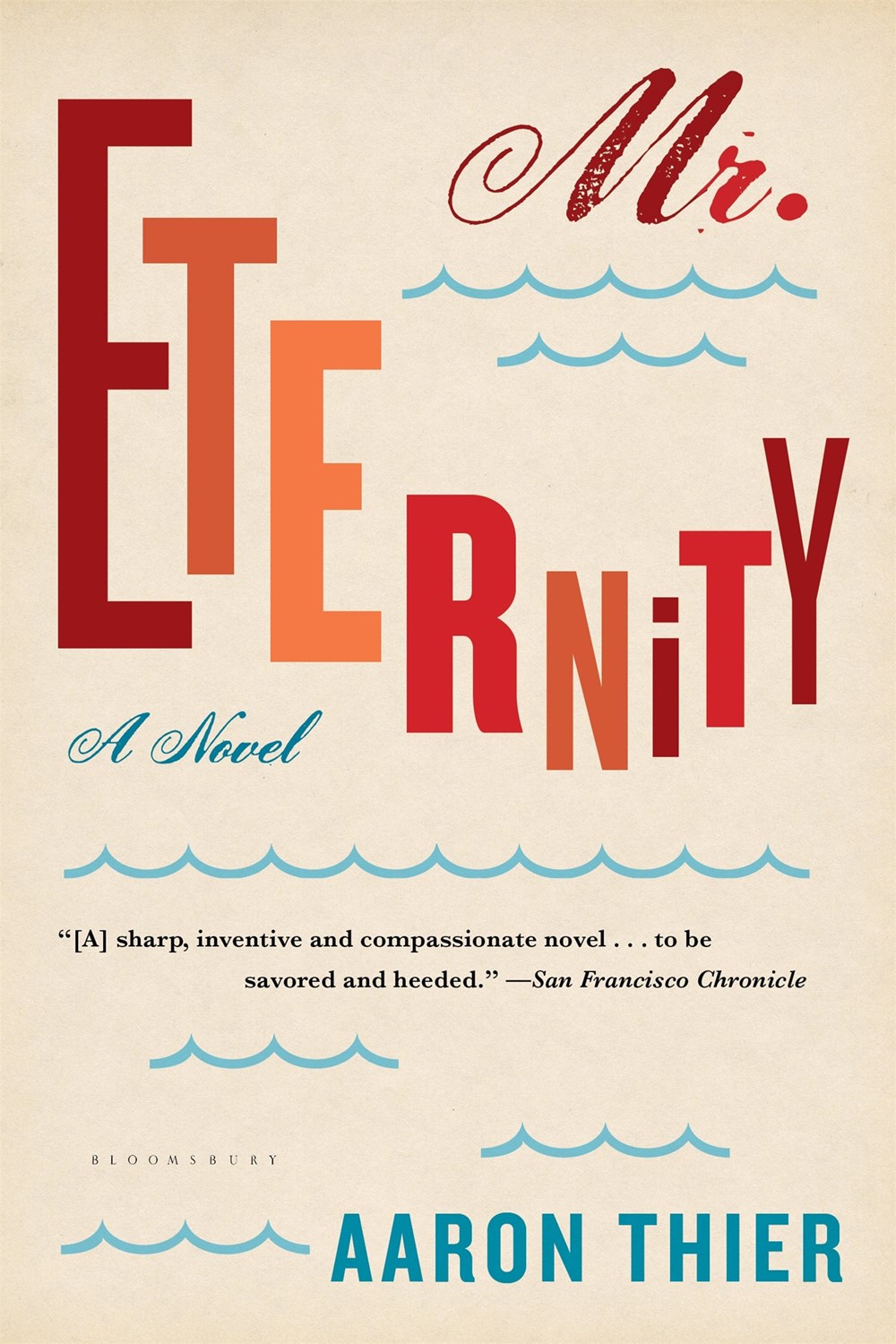 In Aaron Thier’s novel Mr. Eternity (released in paperback today), an ancient and beguiling figure known as Old Dan lives nearly a thousand years, from the 1500s to the 2500s.

During that time, sea levels rise, the climate warms, the North American Midwest transforms into jungle, and the United States as we know it collapses into something like a fiefdom run by an over-reaching dreamer fascinated by Old Dan’s tales of light bulbs, towering hotels, and extinct animals. Old Dan’s memories, older than any written record, become pocked with fantasies and misremembered facts that render the past nearly unrecognizable. Mr. Eternity is therefore as much about the dangers of forgetting history as our inability to see where our collective choices are taking us. It’s occasionally dark stuff. But the book is actually quite funny. As Lord Buckley put it, comedy is tragedy plus time. And Old Dan has plenty of that.

Unfortunately for us mere mortals, time is short. President Trump pulled the United States out of the Paris Climate Agreement—a major blow to a world seeking unification on the matter. Narratives that explore the global effects of climate change—and reasons for why we continually fail to take action in our own lifetimes—are therefore more important than ever.

I spoke with Thier about why he chose to address climate change in his novel, his thoughts on the future of humanity, and his optimistic view of the human capacity for love and decency.

Amy Brady: I was struck at how much your imagined year of 2500 resembles your description of 1560: the jungle-like environs, the unequal power structures, the fascination (and perhaps reliance on) myth. How did you arrive at your vision of the future, and how likely do you think it’ll become reality?

Aaron Thier: I guess I’ve got two answers. On the one hand, climate change is an unprecedented catastrophe and this kind of breakdown looks plausible to me. It certainly seems more likely now that we’ve elected the orange nitwit in the tinfoil hat. And in that sense, 2500 resembles 1560 because I think we really could return to an illiberal, superstitious, pre-modern world. To help me imagine what that transformation would look like, I thought about the apocalyptic world of the Spanish conquest, but I also read about places in the modern world where institutional controls are weak or nonexistent, like Haiti and Somalia.

On the other hand, though, it’s important to say that Mr. Eternity is a novel, and everything in it is part of a larger metaphorical structure. In that sense, the novel’s symmetry, that return to the past, is a figurative way of expressing my own fear about what might happen. If the book points to this worst-case scenario, it’s not necessarily because that’s the one I think is most likely—it’s just the one I’m most afraid of.

Amy Brady: Why did you decide to write a novel that addresses climate change?

Aaron Thier: Because it’s the most important problem in the world, and no one writes about it! Or at least that was how it seemed to me. Better to say that no one writes about it in a way that I find satisfying. I think there are some simple reasons for this, the most important of which is the scale of the problem in time. Even if climate change is happening very quickly in geological terms, it’s happening just slowly enough that it’s hard to see in the time-limited context of a human story. You can point to an anomalous storm and say, “That is climate change,” but even though it’s true, it’s not felt.

I tried to solve this problem by moving back and forth in time—2016 to 2200 to 2500 and back again—so that the human-sized stories are unfolding against a larger background. The narrators have a poor understanding of what’s gone wrong, but it doesn’t matter because the reader can see the disaster in something like an objective way.

Amy Brady: I read so many parallels between Old Dan and his sidekick Quaco and Don Quixote and Sancho Panza. Was Don Quixote an inspiration for this book?

Aaron Thier: Absolutely. Don Quixote is a foundational text for me and for lots of writers I admire—a book that tries to get at the true thing by means of complex, jagged, allusive comedy.

As far as the Knight/Squire dynamic, though, I think it’s more that Old Dan wants to think of his story this way. Like all of us, he’s trying to identify the big patterns in his life so that he can figure out what kind of story he’s living in. Don Quixote is the kind of story he likes, and Quaco, who has been his slave, looks to him like a logical Sancho-figure, so he pushes that analogy. The problem is that Quaco won’t cooperate. He’s living in a different story, the not comic story of Africa in America, and everything he does is invested with a gravity of purpose that’s at odds with Old Dan’s way of conducting himself.

Amy Brady: The United States has officially pulled out of the Paris Climate Agreement. In an age when climate change denial is permeating the U.S.’s highest levels of office, what role do you see Mr. Eternity—and other books that address climate change—playing?

Aaron Thier: The government’s withdrawal is a ridiculous and cowardly abdication of responsibility. History will not be kind. But at the same time, our response to climate change has to be a civilization-sized response, and while federal regulation is very important, there are lots of other things that need to happen too. We need to change the way we think about the ordinary business of life.

And that kind of change is something that narrative art can help to accomplish. Not one book on its own, obviously, but a thousand books, a thousand movies. Tell the right stories and you have a generation of younger people growing up in a cultural environment in which climate change is an acknowledged and incontrovertible part of reality. Or that’s my hope, anyway.

Amy Brady: I understand that you once lived in Florida. Has living in the ocean-surrounded state informed your view of climate change?

Aaron Thier: Of course! South Florida is a good place to think about climate change. Or a bad place, depending on what you mean. We had a neighbor who worked for State Farm. He told us terrifying things about flood insurance. The fact is that there’s been enough warming already to swamp the whole region, not just the coastal cities. You go there, you think about that, you realize that the state legislature is controlled by cretins and the governor’s mansion is occupied by a man who belongs in a padded room, and it’s even stranger than it is terrifying. The whole dynamic—inevitable catastrophe and intractable denial—is incomprehensible. It made a big impression on me. The weirdness of it. The way that human beings are so smart and so stupid at the same time. I think that’s what Mr. Eternity is about.

Amy Brady: Even though climate change has radically changed the landscape in your imagined future, Mr. Eternity reads as a very funny—and to my mind, hopeful—novel. What inspired you to balance such a despairing vision with humor? And was maintaining that balance difficult?

Aaron Thier: First, maybe, it’s just the way I am. I’ve never been able to say the quiet serious thing. But here’s something else: Novels that depict a really grim future often ignore the human capacity for humor, love, optimism, decency. To me that’s not just bad writing, it’s a misrepresentation of the whole experience. I don’t want to read a “dystopian novel” in which miserable people behave miserably in a miserable world. That seems ridiculous. The responsible and truthful apocalypse novel is the one that’s funny, because that’s the one in which people are doing what people always do, which is find opportunities for joy and humor even when things are bad. This is the advantage of our capacity for denial, I guess.

But I should add that I am optimistic in some ways. When Trump withdrew from the Paris Agreement, the response was overwhelmingly negative, here but especially around the world, and it was a good reminder of the momentum that’s been building. Climate change is a global problem to which everyone else is committed. American multinational corporations have to respect the decisions of many governments, not just ours. And renewable energy is getting cheaper. And U.S. energy policy is substantially regulated at the state level. And so on.

Amy Brady: What’s your next project?

Aaron Thier: I just finished a new novel about two young people who are chased across America by the Old Testament god. It’s a road novel! We’ve been having trouble with the title.

Aaron Thier is the author of the novel The Ghost Apple, a semifinalist for the 2015 Thurber Prize for American Humor. He writes a column, Food & Consequences, for Lucky Peach and he is a regular book critic for the Nation. He lives with his wife in Miami. http://www.aaron-thier.com