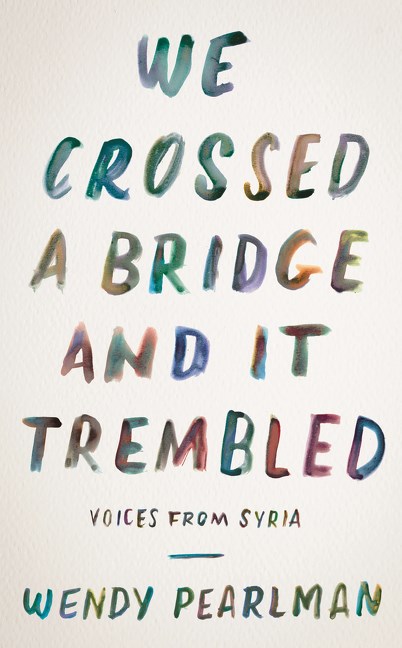 Most people know the conflict in Syria is terrible, but not the who, what, where, when or why. Wendy Pearlman’s new book, We Crossed a Bridge and It Trembled, sheds light on the conflict by giving voice to Syrian refugees. Pearlman interviewed over three hundred Syrian refugees over several years and compiles their stories, offering snapshots of a diverse group of people. Some of the stories are difficult to read, but they are all striking. The result is a powerful must read book for anyone wanting to understand what’s happening in Syria and why it matters.

Pearlman is associate professor of political science at Northwestern University, where she also holds the Martin and Patricia Koldyke Outstanding Teaching Professorship and is a Faculty Fellow at the Buffett Institute for Global Studies. She is the author of Occupied Voices: Stories of Everyday Life from the Second Intifada and Violence, Nonviolence, and the Palestinian National Movement, which was named one of Foreign Policy’s best books on the Middle East in 2011.

I recently spoke with Wendy Pearlman about the interview process, second-degree trauma, and Syria’s inclusion in Trump’s travel ban.

Rachel León: In the introduction you offer a brief historical overview of the conflict in Syria. Why do you feel it was important to situate these voices within a historical context? 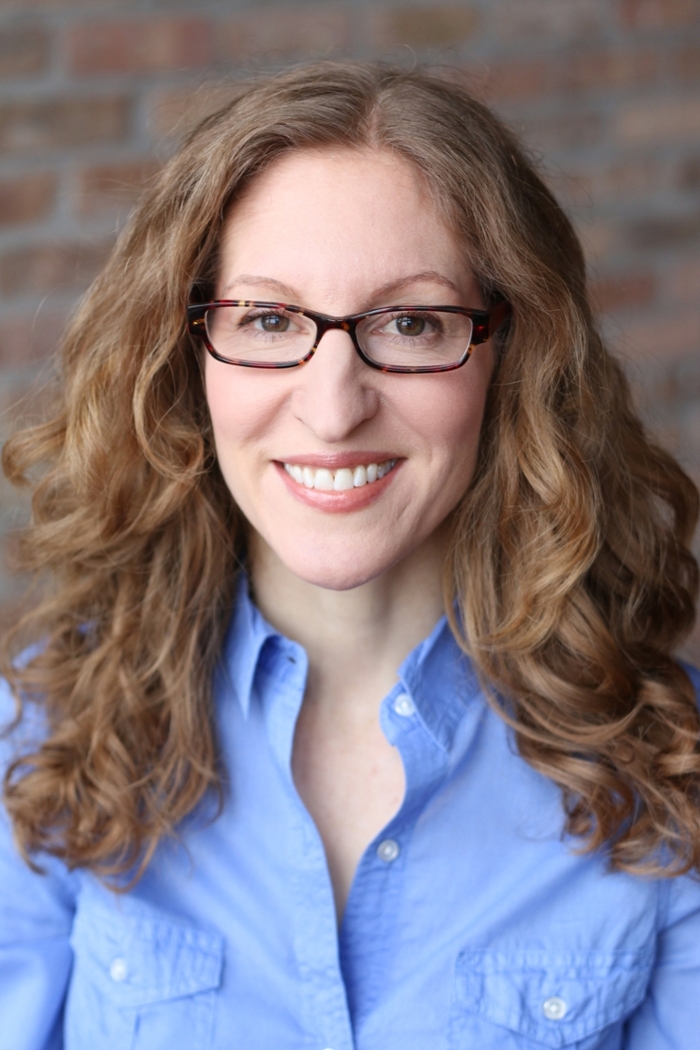 Wendy Pearlman: The war in Syria is complex and confusing. In my teaching, public speaking and everyday conversations, I find that many Americans feel bewildered by it all. They know that something horrible is happening in Syria, but aren’t quite sure who is fighting whom and why. There is some great media coverage of the conflict—a lot of it produced by Syrians themselves. But journalists have pressure to report on breaking news and rarely have the luxury to take a longer view and explain how things got to this point. I wanted to write a book that could give readers a deeper understanding of the conflict’s origins, nuances, and evolution over time. The voices in the book convey much of that history. I added an introduction in my own voice to offer more background on the issues and events that the personal stories bring to the fore.

Rachel León: The title of the book comes from a line spoken by Annas, a doctor from Ghouta. There are a lot of beautiful and striking lines throughout the book. What was it about this phrase that lent itself to being the book’s title?

Wendy Pearlman: Yes, so many lines are beautiful and striking! Syrians’ own ways of expressing their experiences, thoughts, and feelings are so powerful. That is why I became convinced that the best way to convey these stories was to allow people to read them directly.

This phrase that became the title grabbed my editor and me because it both describes a viscerally specific memory and serves as a metaphor for the conflict as a whole. It comes from a description of a mass protest during the early months of the uprising, when it still consisted nearly exclusively of nonviolent demonstrations. Annas remembers how a huge crowd marched over a bridge and it shook under the weight of so many people. Literally, the title is a reference to the power of people coming together to demand change.

But it is also symbolic. During this conflict, Syrians have crossed many bridges—psychological, social, political, and territorial. They crossed from authoritarianism to revolution to war to exile. They are still trembling under the reverberations of these transformations. And the rest of the world is, too.

Rachel León: Was it difficult to find so many people willing to tell their stories and to be so open?

Wendy Pearlman: I was continually amazed and grateful for how willing people were to talk. Many people told me that they had never before recounted their life story. And yet, most were able to speak for an hour—sometimes many hours—fluidly narrating one life event after another. I hardly even asked questions beyond something general to get the conversation rolling or poke for elaboration along the way. Many Syrians are frustrated that other people are always speaking for them, and they want a chance to speak for themselves.

Rachel León: You interviewed over three hundred Syrians, and the range of voices are diverse: parents, students, teachers, artists, doctors, activists, government employees, rebels, refugees, prisoners, Christians, and Muslims. Was it a conscious decision to give voice to people from all different walks of life?

Wendy Pearlman: Yes. I tried as much as possible to gain varied entry points to varied social networks in order to speak to as wide a range of people as possible. Syrian society is a complex mosaic of people of different religions, ethnicities, and points of view.

People have different perspectives depending on their socioeconomic class, gender, and generation, among other factors. Different parts of the country have experienced conflict in different ways, as have the rural and urban communities within them. I wanted to display Syria’s diversity, while also showcasing what many citizens share despite that diversity.

But here, there’s a major caveat. As I explain in the book, most of the people I interviewed are opposed to the regime of Bashar al-Assad. The book focuses on that large slice of the population, delving into the triumphs and tragedies of their shared struggle.

Rachel León: Some of the stories are gut-wrenching and not easy to read. Did you experience second degree trauma from listening to these stories?

Wendy Pearlman: I did, actually. The magnitude of suffering in Syria is indescribable—it can’t leave untouched anyone who has engaged with it. During my first interview trip in 2012, many Syrians I met had suffered greatly, but were still hopeful that the conflict would end, and they’d soon return home to a free Syria.

By my second interviewing trip in 2013, there was a palpable sense of despair. That summer I collected many especially horrific stories: of people being tortured in prison, of families living through bombing raids, of individuals whose loved ones had been killed or disappeared, and so on. While I was in Turkey and Jordan, I was so focused on recording as many testimonies as I could, that I didn’t process how much they were affecting me. Then I got home and sort of collapsed, emotionally speaking. For weeks, I woke up tired and just could not get over that exhaustion. I had never before heard the term “secondhand post-traumatic stress.” As soon as I did, I knew that was what I had. I ultimately had to put this book aside for several months. When I felt stronger, I started working on it again.

This was my experience as a very privileged American living with security and comfort in Chicago. It is difficult to comprehend the layers of trauma that Syrians have endured—and continue to endure. I am in awe of their resilience.

Rachel León: Rather than dividing the book into each person’s story, it’s sectioned off into parts that reflect different times and themes. Why did you decide to organize the book this way?

Wendy Pearlman: I experimented with several different ways of structuring of the book before I settled on the one that worked the best. My first book, a collection of interviews with Palestinians in the West Bank and Gaza Strip called Occupied Voices, was organized by personal stories.

In We Crossed A Bridge, I instead used personal stories to construct a collective Syrian story. I think that it’s difficult to understand the current situation in Syria without understanding the nature of the regime that was established after 1970, why peaceful demonstrations began in 2011, how the regime responded to protest with violence, and then how war escalated thereafter. I crafted the book to walk readers through that history, as a cross-section of Syrians has lived it.

The substance of books is intimate testimonies, but its arc follows the trajectory of Syria rather than that of any individual life. I see it as a mosaic of voices, moving through time.

Rachel León: One of the countries effected by Trump’s travel ban is Syria. Will you share your thoughts on its inclusion in this ban?

Wendy Pearlman: I think it is wrong that in the name of security we are shutting our doors on people seeking security. And that, in fear of terrorism, we are turning our backs on people escaping terror. I believe that the United States should do more, not less, to stop bloodshed in Syria and offer refuge to Syrians who have been forced to flee their homes. I hope that people who read this book will agree.

Rachel León: You end your introduction with the following lines:
“One wonders what might have been different had we listened to Syrians’ voices earlier. It’s not too late to listen now.”
Why do you think it’s important that these voices are heard?

Wendy Pearlman: Every day, Syrian civilians are killed, starved, tortured, or displaced. Atrocities are happening right now on our watch. The very least we can do is pay attention.

And I think the best way to do so is to listen to what Syrians themselves have to say. I hope that those who read this book will leave with greater empathy for what Syrians have endured and greater respect for their courage and strength. I hope that they will call upon our government to do more: to engage in meaningful action to end the war in Syria and push for a real political transition to a free system, to demand protection for vulnerable civilians who remain in the country, and to extend opportunities for dignified futures for those who have become refugees.

NON-FICTION
We Crossed a Bridge and It Trembled by Wendy Pearlman
HarperCollins
Published June 6, 2017

Wendy Pearlman is associate professor of political science at Northwestern University. She is author of numerous articles and two books, Occupied Voices: Stories of Everyday Life from the Second Intifada and Violence, Nonviolence, and the Palestinian National Movement. She lives in Chicago, Illinois.

A Baker’s Dozen of Books for Mental Health Awareness Month