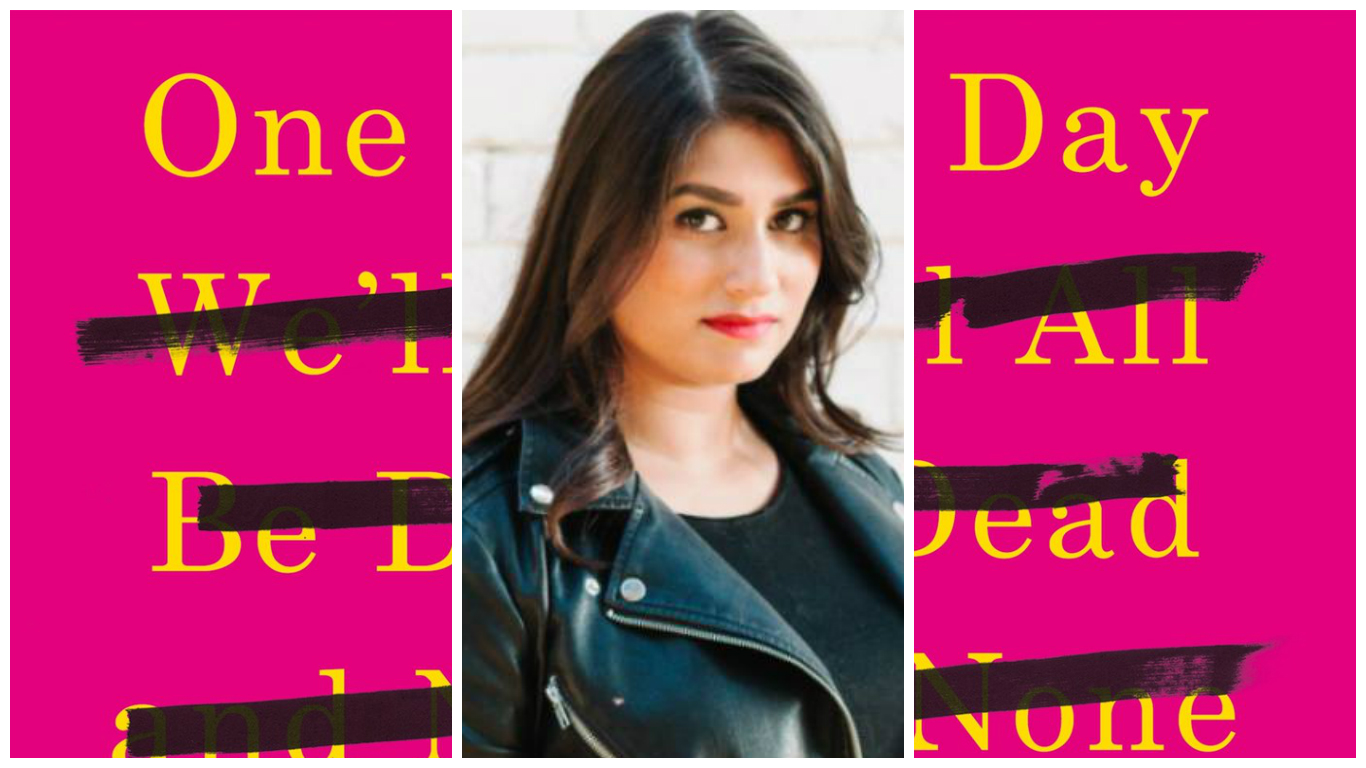 Sometimes it seems like internet trolls sit around waiting for strong women to voice their opinions so they can attack. Last year in her memoir Sex Object, Jessica Valenti highlighted some of the vicious things trolls had said to her, as did Lindy West in Shrill. Now BuzzFeed  writer Scaachi Koul opens up about the time she was driven off Twitter after calling for non-white, non-male contributors in her new essay collection One Day We’ll All Be Dead and None of This Will Matter.

Anyone who is familiar with Koul’s writing knows she is intelligent, funny, and razor sharp—and her new book is all of these things. Koul tackles serious issues such as racism, rape culture, and body image with candor and humor. I recently spoke with Scaachi Koul about race, politics, and online harassment.

Rachel León: Your parents are a force throughout the book. Have they read it? How do they feel about it and the way they’re portrayed?

Scaachi Koul: My dad didn’t read it because he knows better. Around the time the book came out my mother talked to him and said, “If you read this and you get upset, that’s your fault because this isn’t for you.” I didn’t write this for them. They’re involved in it, certainly, but there is a lot of stuff in the book that would upset them. But I don’t think it would be the stories about them. What would bother them would be the other things I write about—drinking and rape culture and stuff like that. Those are probably really anxiety-ridden things to know about your kids. Upsetting to any parent. As for the stories that actually involve them, I think my dad is a real glutton for attention and he feels a modicum of fame at this point.

Rachel León: “Fair and Lovely” is a striking essay dealing with race, including post-9/11. Can you talk about what it was like being Indian in Canada at that time?

Scaachi Koul: I think generally speaking—and this is a longstanding Canadian tradition—we think we’re better than the U.S. when it comes to race relations and politics in particular. But the things that happen in the States bleeds over with us in a very real way. We see this with what’s going on with Trump. I know that our leaders are really different. Trudeau is a liberal facing person, but I don’t think he’s all that great. You can see this Trumpism in politics bleeding over here because we have racism here, too.

We have two candidates running for the Conservative leadership. One is clearly terrified of immigrants and the other was on Shark Tank for the last few years. What’s different? It’s just we have 35 million people, so it’s going to look very different and the scope will change. Plus, Canadians like to think of themselves as polite, so we just avoid talking about our problems in the same way. And anyone who publicly does is punished. As for what happened after 9/11, that was such a strange period. I was in 5th or 6th grade so my understanding and my peers’ understanding was very simplistic. I don’t really know what the adult understanding of it was that year because mine was as a child. We were fed imagery that we didn’t have context for, but we could understand that people were afraid of brown people. That was the message a lot of us absorbed.

There have been great influxes of brown immigrants in a lot of Canadian communities. My parents came in the late 70s/early 80s, when a lot of them arrived. We’re not Muslim, but it doesn’t matter. We all get lumped together unfairly, perceived as dangerous or worthy of fear. After that happened it proved to me how easy it is for people to think like that because you don’t fall into those beliefs. And this is true about what’s happening with Trump. This influx of hate crimes and the way people are talking about immigrants and black and brown people—people feel bolder because this because this guy got elected. They feel safer saying it. I think that’s what it taught me on a basic level. I was twelve at the time, so it’s hard to get a lot of context. A lot of it you pull in hindsight.

I remember that was the year when my existence started to change. I felt very different in the world and I didn’t know it at the time, but I see now that’s what it was.

Rachel León: If American politics bleed over to Canada, I’m wondering what the political climate is like for women?

Scaachi Koul: Trudeau’s big thing is that he’s a feminist, and he’s happy to say that all the time. But he has absolutely no proof. You know that version of the internet male feminist who talks about it all the time, but he’s kind of the worst? That’s basically his bag. He thinks if he talks about it enough, it comes true. I don’t trust it. I don’t know a lot of women who trust it. It makes me really nervous.

But listen, if I had to choose between some guy who makes comments about sexually assaulting women and some guy who is pretending to be woke, then yeah, I guess if that’s the choice. But what a crappy bar. What a low bar. I don’t like having that option because it makes me feel like I have to be happy with what I get. A lot of women and people of color feel like that. As if, we should be pleased when our political leaders aren’t actively demoralizing entire populations. But yes, sexism in Canada is a giant issue like it is everywhere. We have a wage gap, we have a wild number of sexual assaults that aren’t investigated. It happens everywhere.

Canada has this weird sheen around it that everything’s all glossy and beautiful and we’re all fine. Yeah, I think there are things that are definitely better here, but the U.S. and Canada are cut from the same cloth.

Rachel León: You’ve been the victim of some serious online harassment and yet you’re very open in your book. Did you have concerns with being so open knowing how vicious Internet trolls can be?

Scaachi Koul: I don’t know what they could do at this point that they haven’t tried to do. I’ve said this before, but with a book there is a cost of entry, so to get access to the information I’m sharing in the book—none of which I’m ashamed of or that makes me feel bad—but to get access to that, you have to buy my book.

So if you would like to do that and you want to give me some money, sure, go ahead. It’s a very different scope than when you write something online. When you write something online people are very happy to be a dick about it because it’s free. You can read half of it and get mad at me. But this costs money and ends up cutting some of the less friendly audience in half because they don’t want to spend eleven dollars or whatever my book costs in the States. And if you’re that motivated to be mad at me, you’ll find something. It doesn’t really matter. My existence can be fodder for people to be upset, so what can I say?

Rachel León: One of the things internet trolls attacked was your call last year for more non-male, non-white, non-binary writers. Do you think the publishing and media industries are more open to women of color than before? Do you anticipate a change?

The Past that Brings Us Forward in “The Orchard”

Scaachi Koul: It’s a hard for me to glean change because I’m pretty new to it myself; this is my first book. I worked at Penguin Random House Canada for a little while. But publishing everywhere—in books, media, and the arts—is a white place. Every metric will tell you that. I don’t know if it’s shifting, but I can tell you it’s very white. It’s very female centric, that’s one good thing, but the women are white women.

Media is white as hell. Particularly where I am, it’s extremely resistant to change. As evidenced by how I was treated many moons ago, merely by asking for other writers. In Toronto there are a lot of smart women working in the media, but they tend to be white.

I hear a lot of frustration from black and brown girls who have a hard time finding work here and who feel like they can’t thrive in this industry. They feel that there’s no room for opportunity, and that there’s a lot of tone policing that happens when you’re not white and you’re a woman and trying to work in media.

It’s a huge problem. It’s always been an issue. People are talking about it louder now, but that also means there is a whole chorus of people who don’t think it’s true—so it’s just a lot of fighting.

Rachel León: Throughout the book you include funny email exchanges with your dad. Which is your favorite? Are there any funny ones to share that didn’t make it into the book?

Scaachi Koul: I tweet about my dad a lot so I had entire pages full of emails or correspondence from him that didn’t make it in the book. From the book, my favorite probably is: “Better minds and intellects have always been wrongly interpreted by the great unwashed.”

It’s just nonsense. It makes no sense, and he said it out of nowhere. He’s really incredible. I wish everyone could meet my parents, but they can’t. So instead we all have this book.

FICTION—MEMOIR
One Day We’ll All Be Dead and None of This Will Matter by Scaachi Koul
Picador
Published May 2, 2017