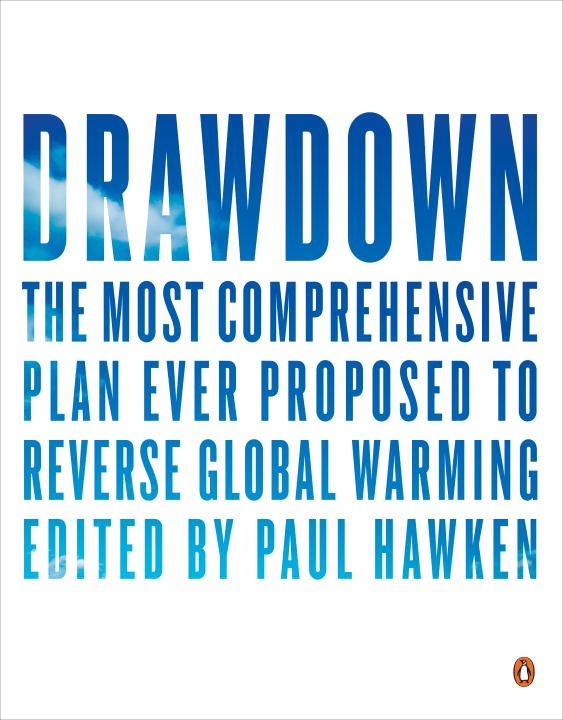 First, the good news. In 2015, 195 nations agreed at a meeting in Paris to take measures to reduce carbon emissions. In early 2016, national leaders from around the world began signing the Paris Agreement.

Now, the bad news. President Trump’s top advisors are split on whether to exit the Agreement, and 2016 clocked in as the hottest year ever on record.

Thankfully, editor Paul Hawken and a coalition of more than two hundred scientists, researchers, fellows, writers, economists, financial analysts, architects, companies, agencies, NGOs, activists, and other experts have formed Project Drawdown to gather one hundred of the most viable ways to “draw down” carbon from the atmosphere.

The result of their research is Drawdown, an immensely readable volume of solutions to climate change written for laypeople but informed by the world’s top experts in the field—the first book of its kind. I spoke with Hawken about the origins of Project Drawdown, the influence he hopes Drawdown has on readers, and the ways in which readers can get further involved in the work that Project Drawdown is doing.

Amy Brady: Tell us about yourself and how you got involved with Project Drawdown.

Paul Hawken: Basically, I was a curious boy who grew up but never lost his curiosity. I have had a many careers while always being a writer and journalist. I think it was my father who set me on my path. He taught at a university but told me that my education began when I left school. I took him at his word, and I’ve devoted my life to learning about the world.

Project Drawdown started sixteen years ago when the Third Assessment of the Intergovernmental Panel on Climate Change (IPCC) was issued. I had been schooled in climate change in the early 1970s by Peter Schwartz at Stanford Research Institute, and I continued to read and be informed. Later that same year, 2001, the Carbon Mitigation Initiative published fifteen climate strategies, eight of which could create global wedges, a method to stabilize emissions for the next fifty years. Each wedge reduced global carbon emissions by one billion tons a year.

I read the plan and did some calculations. Ten of the strategies could only be accomplished by large conservative multinational corporations, mostly energy and utility companies, and each strategy was underwater financially. The boards of directors would have to approve strategies that would lose money for the company they were supposed to be safeguarding. Another strategy involved converting one sixth of all cropland to making biofuel. Whose land? Anybody hungry? Some of them were proverbs like eliminate tropical deforestation or drive one half as much. This is Princeton, so the math was impeccable. However, when I analyzed the list of strategies, I realized that there was very little I could do, and not much that communities, towns, companies, states, or provinces could do either. It left out most of humanity. That is when I started to think about the possibility of Drawdown.

I wanted to do two things. First, I wanted to know all the solutions that could help reduce and sequester emissions (drawing carbon out of the atmosphere back to earth). Second, I wanted all of us to name the only goal that made sense, and that was to reverse global warming, not stabilize it. Global warming is inherently unstable. Mankind has never lived on earth when atmospheric levels of CO2 were over 290 parts per million (ppm). Stabilizing at 350-400 ppm is what you might call terra nova. To friends at the large environmental NGOs, I suggested a project that would enlist researchers to model the hundred most substantive solutions to reverse global warming. People nodded and said they did not do that sort of thing. After a couple years, I stopped asking.

In 2012-13, a series of very provocative articles by eminent authorities on global warming came out that scared people witless. Friends started to wonder if it was game over. I had a different take: maybe the world was waking up and it was game on.

Amy Brady: I was surprised and delighted at how readable Drawdown is for non-scientists like me. Who is your intended audience for this book? And what kinds of steps do you hope they take after reading it?

Paul Hawken: The intended audience is you. The science of climate change is extraordinary. The IPCC is the greatest science project ever undertaken by humankind, undergirded by over two billion data points. On the other hand, communication by climate scientists has not been effective. It has frightened, threatened, numbed, excluded, and polarized people in the US. Of course the science was fought by industry funded groups that demonized scientists and the science. The first wave of fake news originated here and was paid for by billionaires—that didn’t help understanding.

I wanted to create book that was engaging and fun to read, that made the science understandable. And I wanted a book that focused on possibility instead of a dreaded inevitability—a book that did not invoke guilt or anger. The first step I want people to take is in their minds: to imagine that global warming can be reversed, that we have everything at hand to do so, and that in so doing we create security, jobs, and improved health and wellbeing—a better world. I hope people share it, talk about it at home, with their communities, and in their companies. The modeling we did on impact, cost, and income that comes from the solutions is robust and solid. We are hoping it will influence policy, investment, and philanthropy. And last, we trust each individual will determine what is the most appropriate step for them.

Amy Brady: Drawdown is impressively persuasive in its arguments for why and how each solution should be implemented. But it includes discussions of the challenges posed by each solution as well. Why include these challenges?

Paul Hawken: We want to be honest and authentic, to be on the side of the reader. I call those challenges “yeah, buts.” We want the book to be credible, and if we only painted rosy pictures of each solution then it would be a sales job. We aren’t trying to convince anyone—we are trying to inform.

Amy Brady: You’ve described the solutions in Drawdown as a “comprehensive plan of action.” Can or should these solutions be implemented piecemeal?

The Indelible Mark of Women in “The Lost Apothecary”

Paul Hawken: We call it a plan, but we also say we didn’t make the plan. We found the plan. It is the collective wisdom of humanity and what we found is that society is on the case. The solutions are being implemented piecemeal and in consort. Should there by better integration and coordination? That would be wonderful.

Amy Brady: From my layperson’s perspective, it seems like several of the hundred solutions described in Drawdown could be implemented in the private sector—that government intervention and policy aren’t necessary. Is this an accurate understanding? And if so, why is it important that non-government entities become involved in plans to reduce global warming?

Paul Hawken: As mentioned at the outset, one of the areas I felt was missing in 2001 was agency—a way for each sector of society to see and understand what its role could be. A federal government can greatly accelerate change, as we’ve seen happen in Denmark and Germany. Or it can deny and whine, as does ours. Nevertheless, the new regime in the United States cannot stop the growth in virtually all of the solutions, because it is not the source of the solutions. The US government has never been a global leader with respect to climate change, so there is not much it can do to reverse the direction. It can allow big companies the right to make the air and water dirtier, but that will only accelerate the movement to make the earth a better place for all.

Paul Hawken: We are starting on several new projects. The most exciting is working with Patricia Scotland, the Secretary-General of the Commonwealth of Nations, fifty-two countries that total nearly one third of humanity. She is committing the Commonwealth to reversing global warming based on our work, and using that as a basis for economic and ecological regeneration. Working with the Commonwealth, our research moves towards jobs, policy, and economic complexity. And we are going to work on developing curriculum based the Next Generation Science Standards. And a children’s book. Also a Carbon Council comprised of companies committed to reversing global warming. We are a collaborative of some two hundred people, and we expect that dozens of initiatives will emerge from this extraordinary group.

PAUL HAWKEN has written seven books published in twenty-nine languages, including The Next Economy, Growing a Business, The Ecology of Commerce, and Blessed Unrest. He founded the first food company in the U.S. that relied solely on sustainable agricultural methods and has served on the board of several environmental organizations, including Point Foundation, Center for Plant Conservation, Trust for Public Land, and National Audubon Society.