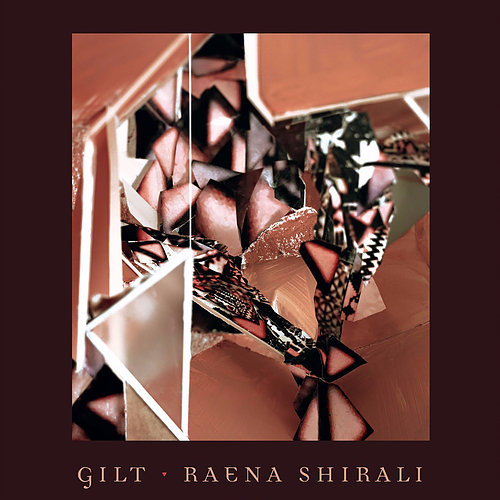 Raena Shirali’s debut poetry collection Gilt is an altar wrought in gold and black: to conflict; to tradition and its alienation; to the American South and the way it erodes the female body; to expectations and the dark ecstasy of falling short. Though the obvious homophone lurks, guilt is not so much a thing felt as a thing recognized and discarded in this collection. Shirali is clearly more interested in bringing traditionally hidden subjects to light. She often acknowledges and honors victims of violence in India—particularly women and children—as well as the trauma of eating disorders, domestic abuse, and sexual violence.

Shirali, the daughter of Indian immigrants, has written a collection that dissects experiences against a white Southern background and begs the question: “What does America demand of my brown body?” Her answer is complicated. She is expected to be thin, fair, demure, accepting, and invisible—all while being fetishized and sexually available. The speaker refuses all this, and we join in her refusal­­­­­; she so easily slips into a narrative of brutal, unabashed nakedness that we are left stunned.

Gilt begins with the expectation of marriage. The speaker, in her early twenties, floats through ceremonies and Indian traditions with reverence while those around her demand betrothal. Yet she is ever at odds with brides and tradition. In “Engagement Party, Georgia,” she questions the American pre-wedding rituals: “Are we always measured / in terms of smoothness?” As a teenager, she learns “from girls with strawberry gloss. they say / fucking is as simple as lemon juice in her hair” (“camouflage”), and so is pressured into a new world of sex and undoing, quite the opposite of the decorated crimson wedding in “Adorn.”

At another wedding, in “Winter in Baroda,” the speaker’s mother searches for suitable matches for her daughter, making comments about the bride. She asks

“if I feel buzzed,
or how I liked the bride’s
shade of lipstick, & I will answer
the way women are expected to:

The speaker lets this moment of almost-conflict wash over her, for her lovers look nothing like the men at this celebration—a choice she made and accepted. Yet here, despite this resolution, we pity her. The faceless men her mother evaluates are much less threatening than her real lovers, who are indifferent at best and violent at worst. There is always the hint of playing at familial disapproval, with disastrous consequences, as in “ghost pepper”:

“like the night a white boy bit down on my lower lip, held my hands in place & let
my screaming get swallowed with my own blood”

Her lovers flit in and out of the narrative like darting fish—indistinguishable from one another, but with their own unique violences. She never evades or ignores her brownness in comparison, and the unhealed wound of that difference in their skin marks each section of the book, such as in “say i am a series of creeks”:

“every boy i’ve loved was a body

better than me at the ebb; they made me runnel,
dirty trickle. no wonder i am desperate

For Shirali, bodies of water become not sites of purification and redemption, but mirrors reflecting her relationships at their swells and failures. In “sweet ocean,” she asks of the sea:

“must you render bodies paler
than when they entered
must you bloat us past recognition”?

It is an ugly thing for the speaker to see so clearly what went wrong and allow the water to swallow everything in resignation of its inevitability. For us, the ocean becomes a familiar mantra of erosion. In Gilt, water always brings destruction unless it’s a muddy darkness no one can penetrate.

All the Lonely People in “Reward System”

Perhaps Shirali is at her best in “if i wrap myself in gold,” where these pressures convene into a single nuclear poem. In a catalogue of sorts, she lyrically pits her ancestry against a dispassionate lover—she remains their mediator, sure in her autonomy:

“i am my own tableau :
madonna, portrait of a loverless
bride, two fingers raised, no kind
of halo”.

Here, the poet transcends the limitations of race and religion, and accepts the consequences as she has throughout the book. “to be gilded / for the fall.” Here, in this fierce mantra, we are gifted a glittering mirror: are we not also a different color entirely in the light?

Raena Shirali has published poems and reviews in Blackbird, Ninth Letter, Crazyhorse, Indiana Review, Pleiades, Four Way Review, and elsewhere. She currently lives in Pennsylvania, where she is the Spring 2017 Philip Roth Resident at Bucknell University’s Stadler Center for Poetry, and she serves as a poetry reader for Muzzle Magazine.