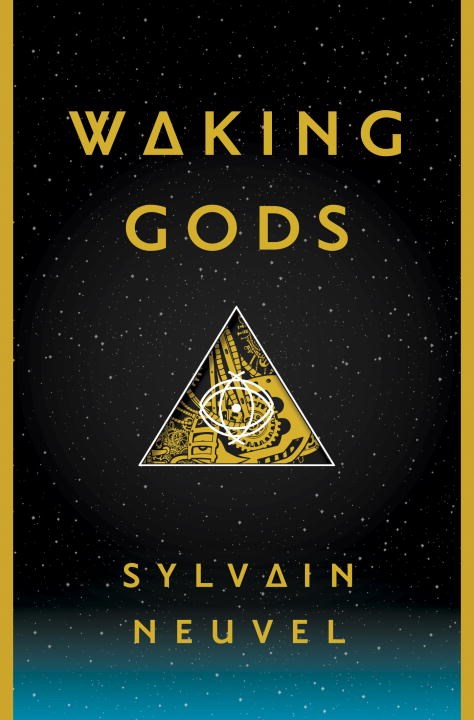 Like Andy Weir’s The Martian, Sylvain Neuvel’s debut scifi novel, Sleeping Giants, snagged a movie deal before even finding a publisher. And also like Weir’s blockbuster of a book, Neuvel’s work is delightfully witty and heart-stopping.

This month, Neuvel follows his debut with a second novel, Waking Gods. Together with a forthcoming third book, they form a series called the Themis Files. The name is apt. Each book unfolds in a series of documents, including interview transcripts and news reports. The structure allows Neuvel, who holds a doctorate from the University of Chicago in linguistics, to play with language style and various perspectives. The effect is almost cinematic—a quality that will surely serve well any future scriptwriters tasked with adapting the books for the big screen.

The “files” reveal a world changing event: a group of scientists discover giant metallic body parts scattered around the globe and buried deep in the Earth. After extracting and assembling them, they discover they form a 20-story tall humanoid robot that they suspect is alien in origin. Sleeping Giants ends on a cliff-hanger, and Waking Gods picks up a few years later when a second robot appears in London.

We spoke with Neuvel about his inspiration for the series, his interests in geopolitics, and—most importantly—what he thinks real aliens would sound like if they ever visit us on Earth.

Amy Brady: I first picked up Sleeping Giants because it promised so many things I personally get excited about: alien life, robots (giant ones at that!), and international politics. How did you come to write about so many different ideas in the same book? Did they come all at once?

Sylvain Neuvel: I’d say all at once. When I asked myself what would happen if we found giant alien artifacts on Earth, my first thought was that we wouldn’t know about it. Only a handful of people would be in the loop. Of course, if those artifacts had any military applications, it would create political tensions. I was interested in exploring the effect such a discovery would have on us, as individuals, and as a species. It doesn’t hurt that I absolutely love research. It gave me an excuse to read about a bunch of different things.

Amy Brady: In the sequel, Waking Gods, we get our first glimpse of the aliens. Why did you decide to make them look so much like us?

Sylvain Neuvel: Movie aliens! Generally speaking, science fiction is about us. Most of the time, the alien part is an excuse to explore very human themes and it helps if we can relate to the aliens in some way. In this particular case, there’s a much simpler explanation. We learned in Sleeping Giants  that aliens came to Earth three thousand years ago and that some of them chose a human mate. They had children. I absolutely love Abbott and Costello, the aliens in Arrival, but I needed my aliens to be reasonably similar to humans.

Amy Brady: You wrote film scripts before starting on the Themis Files. Did your experience as a scriptwriter influence your decision to write these books in the epistolary mode?

Sylvain Neuvel: I don’t know. I wrote one script for a TV show twenty-five years ago. It was optioned but they never did anything with it. I do create little movie scenes in my head, camera angles and all, before I write things down, but I’m not sure that any of that played a role in choosing what form the narrative would take in these books. I like epistolary novels to begin with. I like the fact than in an epistolary novel, the book itself—the physical object—means something. Here it’s a collection of files assembled by…someone. I thought it fit the theme well.

Amy Brady: Speaking of films, the movie rights for Sleeping Giants  have been optioned by Sony. Who do you imagine playing the roles of the main characters?

Sylvain Neuvel: Ha! Let’s start with the easy answer. Yes. The movie rights sold first. That, and the Kirkus review I got for my then self published book, is what got me the book deal. Who do I imagine playing the characters? That’s a tricky question because the movie is someone else’s work. It’ll be inspired my mine, but it’s theirs. I will say this. When I started writing Sleeping Giants, I imagined Ray Stevenson as the interviewer. Somewhere along the way, he turned into Idris Elba.

Amy Brady: Scifi is rife with speculation about what aliens might look like, but there’s less conjecture about how they might communicate or what forms their language will take. Given your doctoral background in linguistics, please tell us: what will aliens sound like when they finally talk to us?

Sylvain Neuvel: Chances are that when we meet alien life, it won’t look like us at all. Aliens might communicate chemically. If they do use sounds, I think Denis Villeneuve is probably closer to what we’ll find with Arrival. That said, of all the made-up languages I heard in my life, the language of the Sebaceans on Farscape is my favorite. If I ever created an alien language, for no reason at all it would be somewhat inspired by that.

Amy Brady: The Themis Files so far read to me like equal parts science fiction and political thriller. Are you interested in international relations beyond what you write about? And if so, how do you think the nations of the world would react to the arrival of intelligent alien life?

Sylvain Neuvel: They won’t react well. I look at the world now, and we’re so full of prejudice. People feel fundamentally superior to others based on the color of their skin, their religion, the mere fact they don’t look exactly like everybody else. We have a long ways to go before we can deal with beings that are really different. I hope we’d rise to the challenge. Like the interviewer in my books, I hope it would help unite us, perhaps even redefine alterity.

Amy Brady: Your work has been compared to that of Michael Crichton. Which writers have influenced you the most?

Sylvain Neuvel: I get a bit uncomfortable every time someone brings that up. I’m incredibly honored, flattered beyond belief, but uncomfortable. He’s probably the one who’s had the biggest influence on me as a writer. The writers who helped shape who I am are mostly the ones I read as a young adult: Crichton, Tom Clancy, and Robert Ludlum.

Amy Brady: Are there any other projects in the works that you’d like our readers to know about?

Sylvain Neuvel: There is most definitely something in the works beyond book three. But I can’t tell you. I could, but then I’d have to live on the run, dye my hair….Stay tuned.

Sylvain Neuvel received a PhD in linguistics from the University of Chicago and is a certified translator. Sleeping Giants is his first book, and Waking Gods, a sequel, is his second. A third book is forthcoming to complete the Themis Files series.

In Barbara Kingsolver’s ‘Unsheltered,’ the 2016 Election Is Old News