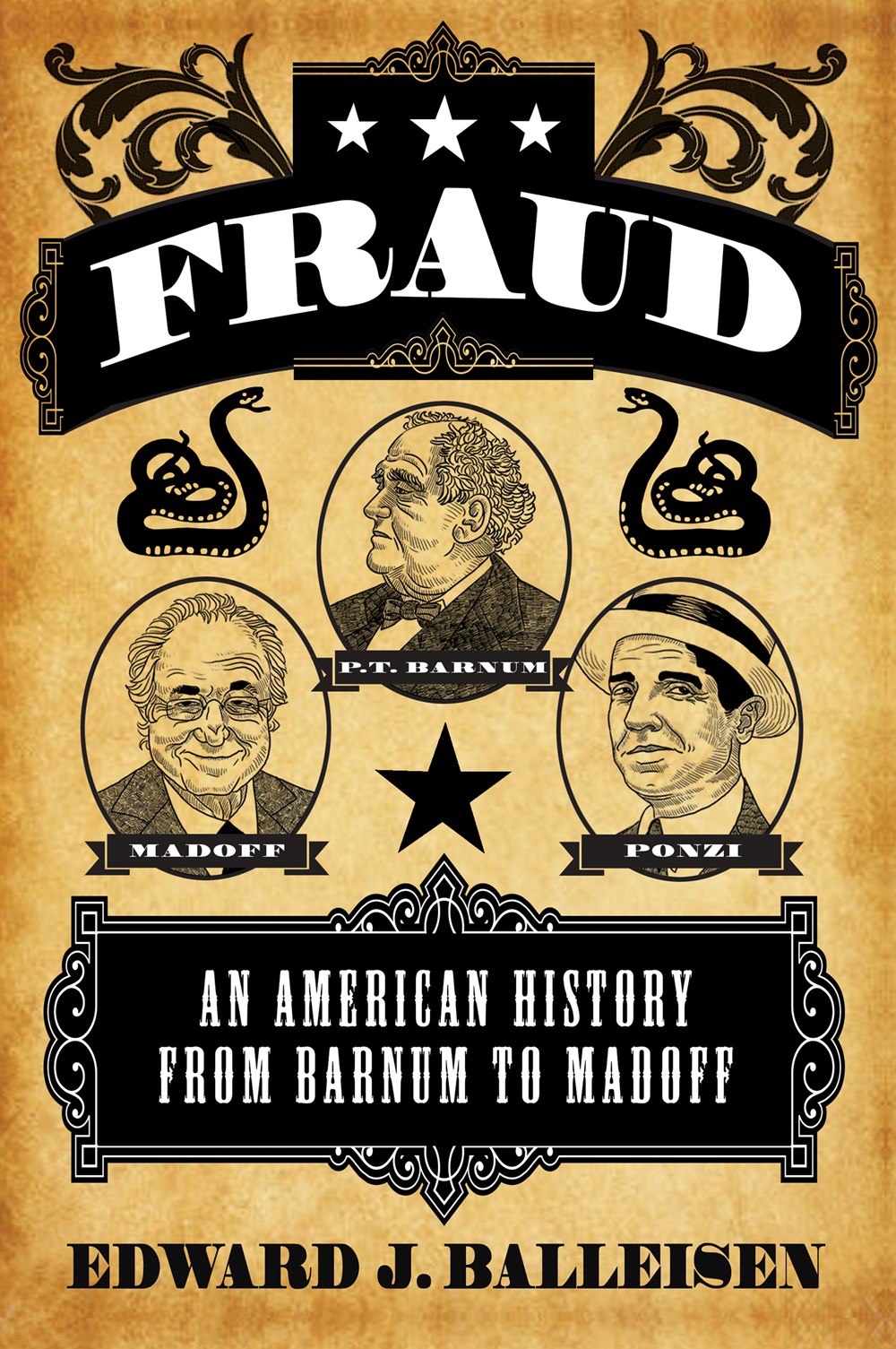 “There’s a sucker born every minute.” That adage–often wrongly attributed to legendary circus showman P.T. Barnum–was first uttered by Michael McDonald, who operated a gambling empire in nineteenth-century Chicago and knew a sucker when he saw one.

It could also serve as an alternate subtitle to a fascinating new study. Fraud: An American History from Barnum to Madoff is an ambitious exploration of two centuries’ worth of swindles, bogus stock schemes and corporate crime. Written by Edward J. Balleisen, a professor of History at Duke University, the book takes a long look at America’s ongoing struggle to strike a balance between encouraging free enterprise and protecting investors and consumers from being ripped off.

“From the American Revolution onward,” he writes, “the country’s lionization of entrepreneurial freedom has given aid and comfort to the perpetrators of duplicitous business schemes.” Capitalism, left unchecked, inevitably breeds corruption and abuse, forcing governments to step in with laws and regulations designed to protect the public—a cycle he argues has been repeated at least four times since the early 1800s.

The challenge, for lawmakers, is drawing a line between legitimate business practices and unscrupulous promoters who are gaming the system to their own advantage—separating “illicit chicanery” from “enthusiastic puffery,” as Balleisen puts it. “How much freedom should firms have in trying to lure investors to part with their savings, or entice consumers to purchase their goods and services?”

The answer depends on the era. It was “buyer beware” in the 1800s, when fraud was so pervasive that Barnum claimed everyone entering into a financial transaction “expected to be cheated” and planned to cheat their customers in turn. The few fraudsters caught could easily evade punishment. New York auctioneer Zeno Burnham, convicted in 1866 of duping customers into buying inferior-quality goods, was able to buy a pardon after serving only a few weeks in prison.

After the Civil War and through to the Progressive era, licensing and inspection laws and new regulatory bodies emerged to combat mail fraud and other abuses. But it took the stock market crash of 1929 and the economic collapse of the Great Depression to force Washington to rein in Wall Street and protect investors.

In his 1933 inaugural address ushering in the New Deal, Franklin Delano Roosevelt condemned the “severe losses” shareholders had suffered “through practices neither ethical nor honest on the part of many persons and corporations selling securities.” In response, Congress created the Securities and Exchange Commission to oversee the investment industry and to require greater financial disclosure by publicly traded companies.

Since the 1970s the pendulum has swung in the opposite direction. The mantra of deregulation, new investment products and the ease of selling scams online and through telemarketing campaigns have created fresh opportunities for fraud. Balleisen’s examination of the last 40 years has the Star Wars-inspired title “The Market Strikes Back,” a period of looser regulation that led to the collapses of WorldCom, Enron and other large corporations, and eventually to the 2008 meltdown that threatened the global financial system.

This is a work of scholarship, and Balleisen is more interested in analysis than storytelling. But his keen insights and the breadth of his knowledge keep the reader engaged, and he introduces plenty of shady characters and ingenious fraudulent schemes to boot.

The usual suspects are here, including super-swindler Bernie Madoff, who orchestrated the biggest Ponzi scheme in history. And speaking of Ponzi schemes, also making an appearance is Charles Ponzi, the famed schemer of the 1920s who used investor capital to pay dividends to new shareholders.

Balleisen traces the origin of the Ponzi scheme back more than 135 years, to an earlier, forgotten fraud. In the 1870s Bostonian Sarah Howe and her Ladies Deposit Savings Bank made unmarried women an alluring offer—she promised to almost double their money in just one year. She raked in more than $10 million in today’s dollars before her scam collapsed in 1880.

Fraud also ventures into the psychology that makes consumers and investors such easy targets for swindlers—a field The New Yorker writer Maria Konnikova brilliantly explored in her 2016 book The Confidence Game. We’re hard-wired, both authors argue, to trust a huckster’s promises of easy wealth.

Americans, Balleisen finds, have always had “a soft spot for charismatic grafters and oily-tongued salesmen,” admiring their “audacity, ingenuity, and capacity to land on their feet.” As early as the 1880s, he adds, one observer noted that swindlers were “well versed in all the foibles of human nature.”

The gullible continue to fall prey to fraudsters, seemingly doomed to ignore or forget the financial scandals and cautionary tales of the past. “In light of such continuity,” Balleisen notes, “one might wonder about the inability of Americans to wise up over the past two-hundred-plus years.”

Since Fraud went to press, Donald Trump’s election and his push to “Make America Great Again” have threatened to disrupt the balance between corporations and investors. The new president wants to overhaul the Dodd-Frank Act, a complex slate of regulatory controls imposed to prevent a repeat of the 2008 financial crisis. The pendulum may be swinging once again, away from regulations designed to protect investors and curb fraud.

If Balleisen is right and history is a guide, any attempt to relax controls on the corporate world is certain to invite a new round of ethical and legal abuses.

Edward J. Balleisen is an associate professor of History at Duke University and the author of two books, including Government and Markets: Toward a New Theory of Regulation, and a three-volume multidisciplinary research collection called Business Regulation. He’s currently working on a project called Policy Shock: Recalibrating Risk and Regulation after Oil Spills, Nuclear Accidents, and Financial Crises, forthcoming on Cambridge University Press.

Some Assembly Required in “Primo Levi: An Identikit”