The 10 Best New Books to Read This November 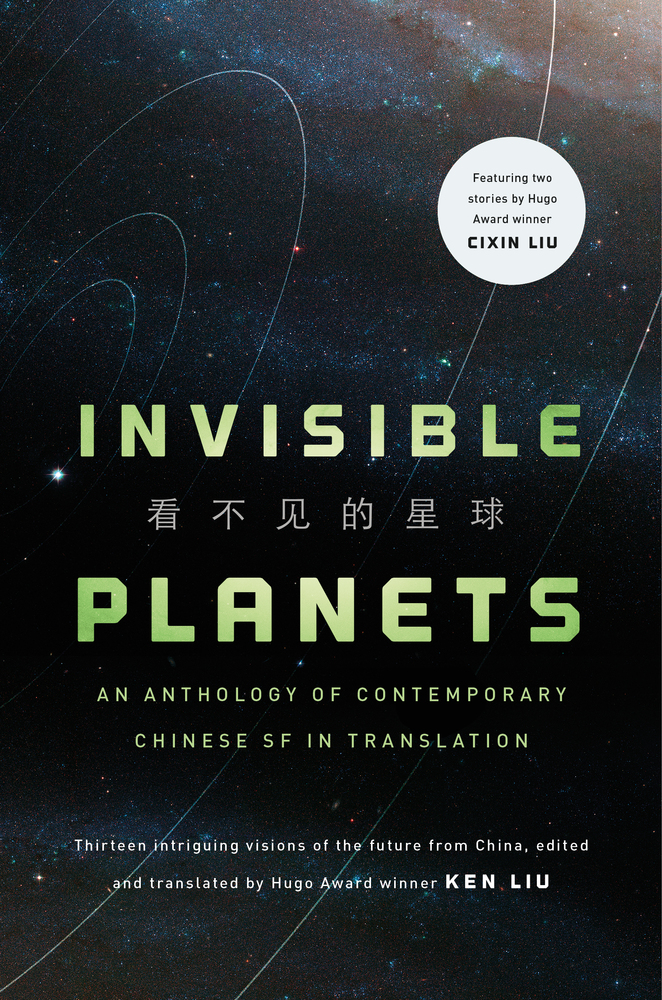 Ken Liu is primarily known for his ambitious, compelling science fiction novels. The Wall of Storms—the second installment of The Dandelion Dynasty, his acclaimed fantasy series rooted in Chinese history—hit shelves just last month. But Liu is also an award-winning translator, working hard to bridge the East-West SF gap one book at a time.

His most recent translated work, Invisible Planets, comes out today. It’s a daring collection of thirteen Chinese science fiction stories translated into English—a groundbreaking work. In this interview, Liu and I continue our earlier conversation on his work and discuss the impetus behind this new project, the effects that translation has had on his own writing, and the ways in which the art of translation and science fiction can come to represent the cultures from which they arise.

Amy Brady: What inspired the collection of Invisible Planets? Were you already familiar with the work of the writers anthologized in the collection?

Ken Liu: Invisible Planets is the first collection of contemporary Chinese SF in English that I’m aware of. I’ve translated dozens of Chinese SF stories over the years and published them in venues like F&SF, Clarkesworld, Pathlight, and Interzone. I simply pick stories that I like and pay little attention to anything else. Over time, I have become friends with many of the authors, but that’s not the reason I encountered most of these stories in the first place.

Although there is a great deal of provocative, interesting SF being written by Chinese authors, very little of it is read in the West due to the language barrier. I picked thirteen of my favorite translations—including one story that had never been published before—and put them together into an anthology. It’s meant to give the reader a sense of the variety of voices and themes and techniques being used by Chinese SF writers. Of course it isn’t comprehensive, and it encodes my own tastes and biases, but I do think most readers will find something in here that will delight them and make them think.

Amy Brady: Does your own writing inform your translation work? Or vice versa?

Ken Liu: The glib answer would be there’s no influence at all.

For most of my decade-plus career as a writer, I had no interest in translations. I got into doing translations purely by accident, as my friend Chen Qiufan, one of the most dynamic voices of contemporary Chinese SF, asked me to take a look at a commissioned translation of one of his stories to see how it read in English. I started making some notes on how to improve the translation to better capture his unique, sardonic voice, and then decided that it would be easier if I just did a translation of his story from scratch. That translation, the first one I ever did, ended up winning a Science Fiction Translation Award, and I realized that perhaps I was in a good position to help introduce my fellow Anglophone readers to the exciting fiction coming out of China.

Since my primary interest is writing original fiction, I’ve always treated my translation work as an entirely separate category of creative endeavor. My own fiction is completely different from the kind of work I like to translate in theme and style, and it would be a poor translator who infects everything he translates with his own voice. I begin every translation with a study of the author’s voice, which is probably the most unique aspect of any writer’s work. Trying to figure out how to recreate a voice in a different language is the most challenging task in any translation effort—but also the most fun.

But a more serious and nuanced answer would be: it’s impossible to tell. Everything a writer writes is inevitably influenced by everything they read, and it would be strange to think that the novels I translated—which I must have read ten, twenty times during the process of translation, dissecting every phrase and tracing out every allusion—don’t influence my own writing in some undefinable way. Similarly, since a translation is a performance and no performance can be isolated from the performer’s life, it would be strange to think that my translations aren’t influenced in some manner by my own explorations in fiction-making. But to tease out the exact influence in either direction would be like trying to trace out how a butterfly’s fluttering wings in Texas ultimately contributed to the typhoons on the shores of Taiwan.

Amy Brady: How is translating science fiction different from translating other genres? Are there any specific difficulties or pleasures that come with translating the language of science?

Ken Liu: It’s a common misconception that technical language makes translating SF difficult. In reality, technical language and jargon are extremely easy to translate because the worldwide modern language of science and technology is English. Therefore, most technical terms and even made-up jargon in Chinese are direct translations from English or are patterned on English terms. Thus, the Chinese term for something specific like “ruby-based traveling-wave maser” is trivial to translate. But a culturally-embedded term like laoshi, which literally means “teacher” or “master,” but is used as a term of respect in contemporary Chinese, is almost impossible to render.

Some SF writers in China and the US argue that SF should be the easiest genre to translate because it is a literature concerned with the universal rather than the specific—more interested in spaceships that encode the dream of Humanity (yes, with a capital H) rather than parochial, local trivialities such as customs or culture-specific practices. I don’t really agree. The kind of SF I’m interested in is intensely concerned with what makes us embedded in our cultures and histories rather than seeking to “transcend” them. And so, for me, the pleasure of translating SF usually comes from encountering these deeply culturally-embedded nuggets that encode an entire way of life and seeking to give them new life in a novel linguistic soil that may not be prepared to nourish them.

Ken Liu is an author and translator of speculative fiction, as well as a lawyer and programmer. His fiction has appeared in The Magazine of Fantasy & Science Fiction, Asimov’s, Analog, Clarkesworld, Tor.com, Lightspeed, and Strange Horizons, among other places. He is a winner of the Nebula, Hugo, and World Fantasy awards. He lives with his family near Boston, Massachusetts. Ken’s debut novel, The Grace of Kings, the first in a fantasy series, was published in October 2015 by Saga Press.