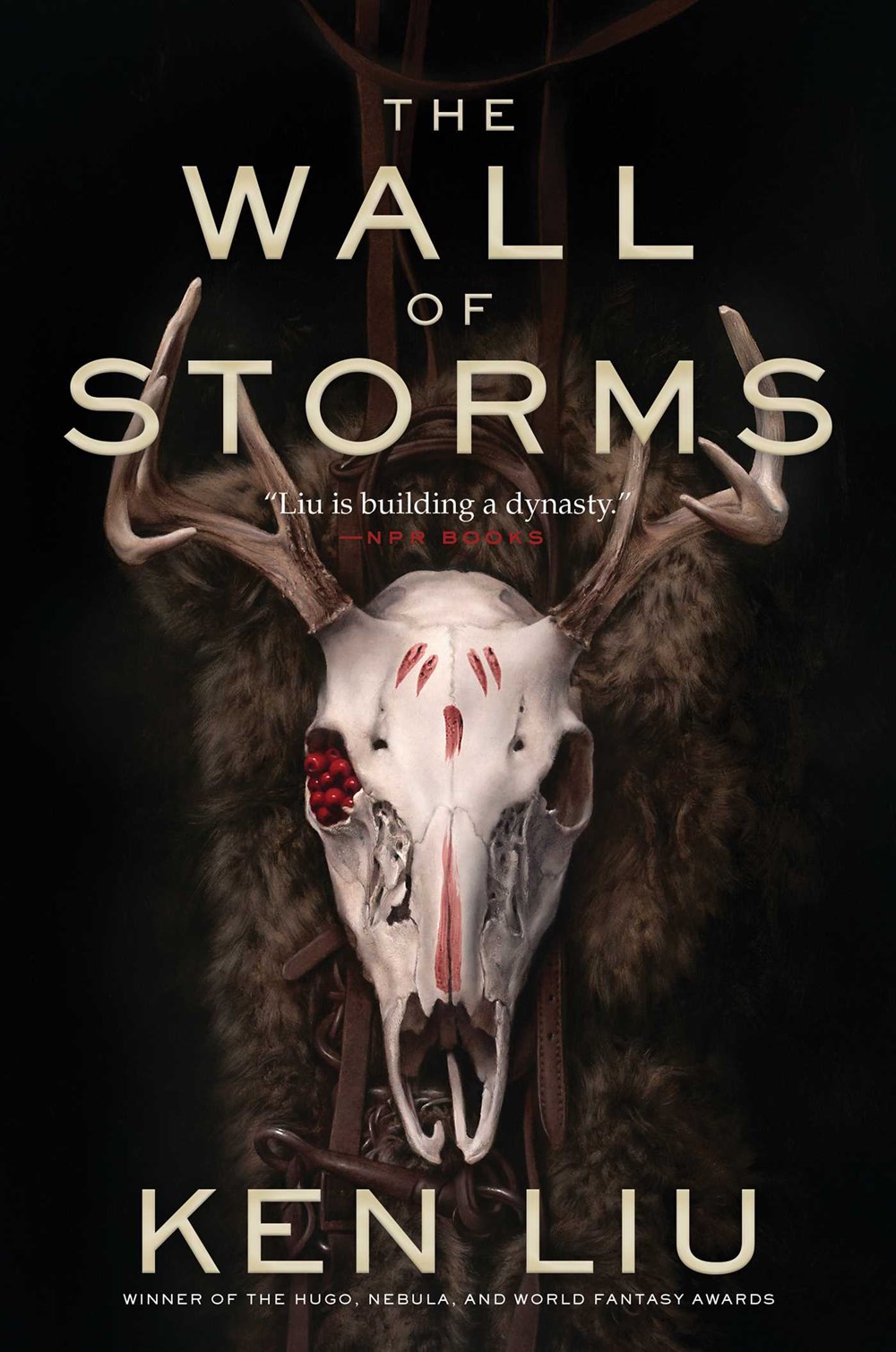 Today marks the release of The Wall of Storms, the second book in Ken Liu’s “silkpunk” Dandelion Dynasty fantasy series. Liu is both a lawyer and a programmer, and the author of The Grace of Kings (the first book of his series) as well as The Paper Menagerie and Other Stories, a deeply moving collection of speculative short fiction.

In all of his work, Liu draws from Chinese and Western traditions to create worlds unlike any other. In this interview, we discuss the influence of Chinese history on his writing; the links between the languages of law, computer programming, and fiction; and how the aesthetics and vocabularies of art, war, music, and technology parallel each other in his latest work.

Amy Brady: The Dandelion Dynasty series pulls simultaneously from Chinese and Western literary traditions. Could you talk about some of your influences in both?

Ken Liu: When I describe the novels as “silkpunk epic fantasies,” I mean that I’m writing with and against the tradition of epic fantasy—as began by Tolkien—by infusing the books with an East-Asia-inspired aesthetic that embraces, extends, and challenges fantasy/historical tropes that are assumed to have medieval European or classical East Asian origins.

Epics are foundational narratives for cultures, and I wanted to write a modern foundational narrative that draws as much on Chinese epic traditions like Romance of the Three Kingdoms as on Western traditions like Beowulf and the Aeneid. The novel pays homage to, but also critiques, Chinese classical texts like Records of the Grand Historian, Tang Dynasty lyrics, Ming Dynasty romances, wuxia classics, and Western classical texts like Paradise Lost, The Song of Roland, the Anglo-Saxon Chronicles, and, as you note, Shakespeare’s history plays.

The first book, The Grace of Kings, is a re-imagining of the founding of the Han Dynasty in Chinese history. Since these legends form one of the foundational narratives of Chinese culture, re-imagining it using the tropes and narrative techniques drawn from both Western and East Asian literary traditions is a way of estranging the narrative as well as the techniques for the reader. It should feel strange, pre-modern and post-modern, unstable, self-referential, fun.

I also drew a lot on oral traditions (such as pingshu storytelling) and media traditions (such as television dramas based on wuxia fantasies). Indeed, I got the idea for The Dandelion Dynasty because my wife Lisa brought up our love for the narratives of our childhood when I discussed my desire to write a novel with her: me running home every day as a kid to listen to pingshu storytellers on the radio with my grandmother and her watching wuxia heroines on the screen and reenacting their swordfights with her sister.

“There’s nothing quite like that in English, is there?” she said. And the rest was history.

Amy Brady: Could you elaborate on what “silkpunk” means and how it differs from “steampunk?”

In creating the silkpunk aesthetic, I was also influenced by the ideas of W. Brian Arthur, who articulates a vision of technology as a language. The task of the engineer is much like that of a poet in that the engineer must creatively combine existing elements of technology to solve novel problems, thereby devising artifacts that are new expressions in the technical language.

In the silkpunk world of my novels, this view of technology is dominant. The vocabulary of the technology language relies on materials of historical importance to the people of East Asia and the Pacific islands: bamboo, shells, coral, paper, silk, feathers, sinew, etc. And the grammar of the language puts more emphasis on biomimetics–the airships regulate their lift by analogy with the swim bladders of fish, and the submarines move like whales through the water. The engineers are celebrated as great artists who transform the existing language and evolve it toward ever more beautiful forms. Indeed, even the fictional system of writing used in the novels embodies this view, for writing is one of our most treasured and important technologies.

(“Steampunk” also refers to a distinct technology aesthetic—primarily inspired by a re-imagined vision of Victorian England—with its own different vocabulary and grammar. Silkpunk is of course analogous to it superficially by drawing for inspiration from the technology of East Asian antiquity, but I think the literary approach, which emphasizes estrangement and melding of multiple traditions—a distinctly American concern—is quite different.)

In writing the Dandelion Dynasty, I devoted as much care to technology as to magic, as much attention to art and writing as to war. The text is consumed with the exercise of power while also imbued with the hope that society is capable of progress. I had such a blast writing it, and I think at least that authorial joy comes through.

Amy Brady: Chinese history—like history everywhere—is rife with oppression and social injustice. As a fantasy/sci-fi writer you have license to write about history in whatever ways you choose. How did these historical power imbalances inform your writing? Do you feel a need or desire to historically revise or “correct” them in some way?

Ken Liu: The Dandelion Dynasty is a re-imagining of history, but it isn’t a series of historical novels.

Here’s the tweet-sized sound bite for the first novel, The Grace of Kings: “War & Peace with silk-and-bamboo airships; Iliad with living books and sentient narwhals; Romance of the Three Kingdoms with u-boats.”

That first novel, The Grace of Kings, tells the story of two unlikely friends, a bandit and a duke, who grow to be as close as brothers during the fight to overthrow an evil empire, only to find themselves on opposing sides of a struggle for the definition of a just society once the rebellion succeeds.

This story is a loose re-imagining of the historical legends surrounding the rise of the Han Dynasty in a secondary world archipelago setting. This is a world of politics and intrigue, of love purified and corrupted, of rebelling against tyranny and seeing one’s ideals compromised, of friendships forged and sundered by the demands of war and statecraft. There are vain and jealous gods, bamboo airships and biomechanics-inspired submarines, battle kites that evoke the honor and glory of another age, fantastical creatures of the deep, and magical tomes that tell the future written in our hearts.

But the “-punk” part of the “silkpunk” designation is about revolutions and changes. The novels pay a great deal of attention to how political change happens in society: whether it’s top-down or bottom-up; how political technologies such as constitutional constraints on absolute power, coups d’état, institutions for aggregating preferences (lobbying groups, hereditary councils, political classes), ideologies, and so on develop and combine; what strategies do privileged and oppressed classes and groups use to shift the balance of power. The dream of more justice for all, an everlasting concern of political philosophers as well as of ordinary men and women throughout the world, is a thread that runs throughout.

In exploring these questions in the novels, I took care to draw inspiration from episodes of Chinese history that have been buried or deliberately suppressed, and are typically unknown to Western readers. Thus, some of the plot points and political developments are centered around constitutionalism, federalism, separation of powers, and democratic governance, topics that are typically neither associated with epic fantasy nor Chinese history—yet, because these concepts, or what we would recognize as prefigurements of them, were important parts of Chinese history, drawing on them for my novel was also a way to redeem that history from the biased gaze that has been applied against it.

Kin Liu: Since the plot of The Grace of Kings draws from Sima Qian’s Records of the Grand Historian, it’s easy to see Kuni Garu as modeled on Liu Bang, the founder of the Han Dynasty. Yet that is not a reading I would endorse or advocate. Kuni is both an archetype (cf Odysseus) and an individual, and he could be said to be inspired by many kings and rogues in historical romances; yet ultimately, he is a character intimately bound to the world of Dara, and his decisions can only be understood in the context of that world.

Amy Brady: Does your background in law inform your writing style or they kind of stories you decide to tell?

Ken Liu: I’ve had two separate careers, one in technology and one in law. Both are related to writing in that these are careers that involve the construction of artifacts (a functioning program or legal document) out of symbols (programming language primitives or legal clauses) under rule systems (the programming environment or legal system) to achieve specific results. Writing fiction is basically the same thing, except that the logic of metaphors tends to dominate over other organizational principles.

So, in many ways, writing fiction isn’t particularly different from practicing law or programming a computer, except that it’s much harder to know whether you’ve succeeded.