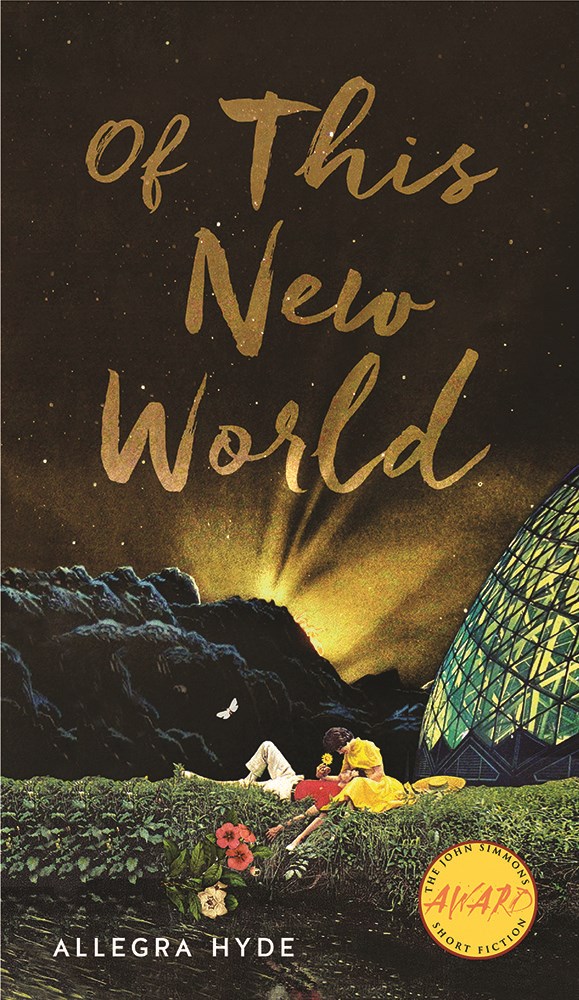 When I looked at the table of contents for Allegra Hyde’s collection Of This New World, I thought it resembled a timeline—from the very first humans on Earth to the last, and then those beyond. As I traversed this literary chronology, I found that the characters of every era and background all seemed to be reaching for a second chance. From the Garden of Eden to the fledgling colonies of Mars, these stories wrestle with finding that ideal starting-over point and the fundamental question about the existence of paradise.

Blurbs for this collection harp on the theme of utopia, but I found more footing in the characters’ desires for redemption and new beginnings. The opening story, for example, “After the Beginning,” deals with the Garden of Eden and Adam and Eve’s fate as outcasts. Indeed, the Garden was the definition of a utopia, yet Hyde’s compact prose focuses on Eve’s determination to move forward instead of “[feeling] shame and [being] bent by it.” There is less emphasis on the Garden that was lost than the urging of Adam to “get over this.” How gripping, too, the idea of Adam and Eve learning to survive, having failed to obey the only rule in the entire world. It is chilling to see through Eve’s eyes and to feel the isolation and the guilt.

My favorite story of the collection, “VFW Post 1492,” drops us into the middle of a date between Jasper and Evelyn in Istanbul. After a few visceral and intimate paragraphs, we learn that we are watching it through the eyes of Jasper’s twin brother, Sam. Having returned from Iraq with “no legs below the knee, a missing arm, a paralyzed left side,” Sam must now suffer the adventures and pleasures of his brother, no matter the distance between them. He sits in his motorized chair back in America, but experiences Jasper’s emotions. “Sam sees it all—eyes open, eyes closed—he can’t not see.” The topic of the war and fighting for a version of paradise (or at least, a better world) is the tie-in to the utopian theme, but again I think Sam’s suffering and Jasper’s linked, physical reaction at the story’s breathtaking climax speak to an inner desperation for a second chance. Hyde’s exploration in this story covers so much ground, it’s stunning, even in its brevity.

Equally as captivating is “Bury Me.” Sally’s mother has died, and this is the catalyst that brings Maddy and a handful of Sally’s ex-boyfriends together for the funeral after a long absence. Pressured into staying the night because “it would mean a lot to [Sally] if you stayed,” Maddy finds herself reliving memories of a friendship that she no longer recognizes. There are knock-you-out sentences that describe Sally and Maddy’s old relationship, “[we] seemed to float untouchable, reckless to the point of elegance,” and Hyde’s prose flourishes with the space to unfold grief and regret and the nostalgic bonds of girl-dom. Stylistically, this story breaks form to include scientific notes about pine trees and their growth patterns, but everything has a purpose, and Hyde embeds a parallel meaning so poignant that you’ll want to start the story over immediately after you finish.

As if there weren’t enough unfair shots to the sentimental heart, “Ephemera” follows a mother, Vera, as she searches in vain for her daughter that has gone missing. She winds up at Carlos Pete’s old and cluttered house, rooming with him and a boy named Smythson. There is a unique bond between the three of them, and soon Smythson is smitten with the distracted and older Vera: “Laying eyes on [her] was like reeling in the kickback of a .45 Magnum.” Revealing the sad past of one character only adds weight to the inevitable future of another as Vera and the two men part ways—for good? Hyde’s craft is at its best here as she stretches time and leaves breadcrumbs of hints and heartbreak from start to finish.

The collection ends on a far-reaching note with “Americans on Mars!” Colonization of another planet has long been the topic for many writers, but Hyde once again narrows her focus to the individuals rather than the idealization of humanity. Rex and Tanya fake a “married application” so they can make the trip to the red planet and start populating the new world. But once he has made the irreversible flight, Rex can’t do his part. With constant reminders of the hell back on Earth and an unhealthy longing for his brothers, it is all Rex can do to not go crazy in his foreign situation. With the heaviest of punches, Hyde ends her debut collection with a future “thick with unknowables.”

Though other stories in the collection like “Shark Fishing” and “Delight®” deal very specifically with paradises (either in a struggle to create it or watching it crumble), Of This New World finds its life in the hearts of those who seek redemption. A few short pieces pepper the collection with their strangeness in plot, but Hyde never relents in her use of language or evocation of emotion. The John Simmons Short Fiction Award well deserved, Allegra Hyde is a must-read new voice in literature.