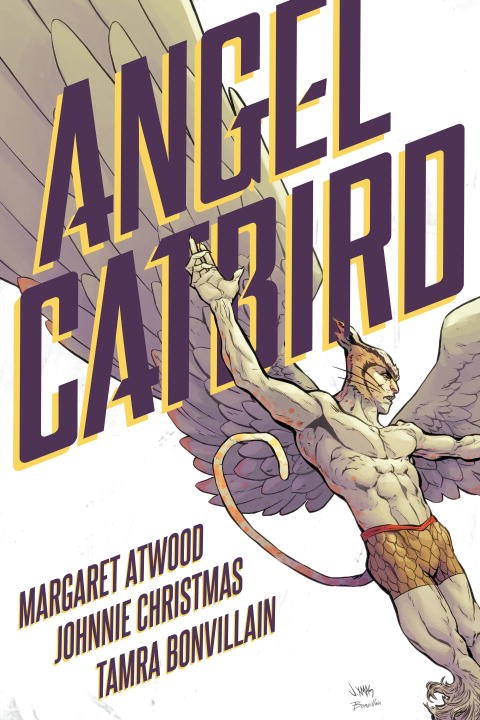 Renowned author Margaret Atwood begins her first graphic novel Angel Catbird with a question: “Why is a nice literary old lady like me—an award-winning nice literary old lady…being dignified and iconic—why is such a nice old lady messing around with flying cat-owl superheroes and nightclubs for cat people, not to mention giant rat men?”

This passage, part of a longer prose introduction, written with self-deprecating humor, reinforces Atwood’s authorial charisma and preemptively answers the question she says some people might pose: This “award-winning nice literary old lady” can write whatever she damn well pleases. She goes on to relate her youthful love of comic strips and books, teenage and adult dabblings with the medium, and then explains the genesis of Angel Catbird and her collaboration with artist Johnnie Christmas and colorist Tamra Bonvillain.

Sadly, her passion and effort aren’t enough to elevate this title to the level her readers are accustomed to.

Angel Catbird is the first volume (a second one is already in the works) centered on a young milquetoast scientist, Strig Feleedus, laboring away on a project of immense importance to his sinister boss, Professor Muroid. Past scientists have met untimely fates and Feleedus, overly trusting, brushes aside these convenient accidents until he cracks the code to a serum capable of transforming animals into humans. Per superhero law, an unfortunate accident exposes Feleedus to the serum, mingling his human form with that of a cat and an owl, turning him into the titular Angel Catbird.

Also wrapped up in the plot is Cate Leone, a co-worker of Feleedus with a secret. Oh, and a secret society of cat-human hybrids complete with an underground nightclub. And cybernetic rats. And a vampire who is also a cat hybrid.

Christmas’s art is pleasant and animated, exaggerated when needed but low-key when not, reminiscent of David Aja by way of Paul Pope. Praise is also due to Bonvillain, who works with a soft palette of repeating colors to flavor Christmas’s panels, fading and shifting from one shade to the next, evoking the hue of watercolor.

However, what undercuts their efforts is Atwood’s scripting. She does display her usual wit, and there’s a sort of charm to how easily Feleedus adapts to his mutation. There is little existential hand-wringing or mournful soliloquies about being an outsider. It’s refreshing and hearkens back to superhero comics before their psychological scarring in the 1980s. Feleedus actually benefits from his transformation, entering a strange new world filled with strange new friends, much like young Billy Batson becoming Captain Marvel, a precedent Atwood cites. It’s a reminder that super powers aren’t always a curse.

Yet the first misstep stems from Atwood’s introduction. Part of what enticed her to turn youthful scribblings into a fully fledged graphic novel is her love of animals. One of the aspects that appealed to her about Angel Catbird is he’s a hybrid of two opposing species. Through this dichotomy she can explore issues of pet control, namely: keeping cats inside to protect them from harm and to prevent the rampant slaughter of birds.

It’s a fine cause to advocate and superhero comics have long been chock full of didactic, afterschool-special talks. However, in a distracting decision, Atwood inserts fact footers throughout the book, little “did-you knows?” Though only a few sentences of text, their presentation is divorced from the narrative and brings it to a halt. On top of that, a few of the factoids’ contents appear as plot or character points. Essentially, the reader is both shown and told the information, resulting in a feeling of redundancy.

The more egregious problem is that Atwood stumbles with some of the fundamentals of sequential storytelling and the interplay of word and image at the heart of comics as a medium, not just superheroes as a genre. Bringing famous talents into comics isn’t new, but it certainly has blossomed. Whether it’s Ta-Nehisi Coates on Marvel’s Black Panther or the list of actors (Brian Posehn, Samuel L. Jackson, Rosario Dawson), writers (Kevin Smith, Richard Donner, Joss Whedon), musicians (Gerrard Way, Tom Morello), or general celebrities (Reginald Hudlin, William Shatner), big names often bring big exposure.

Unfortunately, the results tend to be uneven and the efforts short lived. In Angel Catbird, Atwood relies heavily on an old superhero convention that’s fallen out of favor: the thought bubble. It’s in keeping with the roots of her inspiration but here it’s deployed like a sledgehammer. This might be some sort of wink, but if it is, it never winks enough to mark it as pastiche or parody. It has the maddening effect of explaining and telegraphing the exact thing depicted on the page. It short-circuits the narrative and suggests Atwood hasn’t adjusted well to the collaborative nature of most superhero comics, or (and I doubt this is true but the impression is there) of not fully trusting Christmas to convey the scene without extra narration.

Though Angel Catbird has plenty of invention and is a beauty to look at, I can’t help but get the feeling of watching an athlete trying to act. Michael Jordan was an artist on the court. The same couldn’t be said when he was in front of the camera for Space Jam. Atwood can write: that’s an undisputed fact. Here, when her words have to show rather than tell, the results are less than spectacular.