‘Origins of the Universe’ Asks a Lot of Interesting Questions 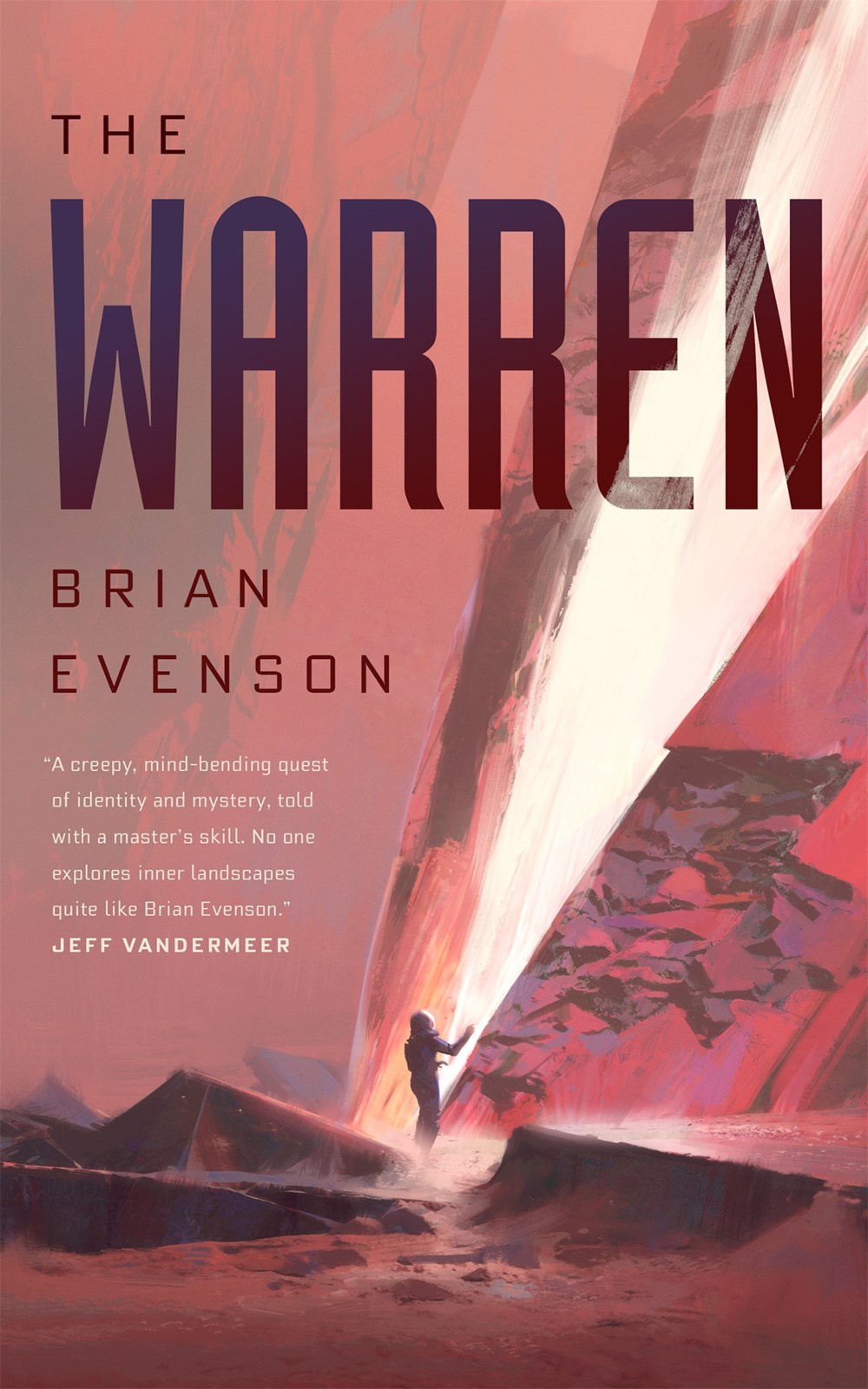 Brian Evenson is having a good year. His latest collection of short horror fiction from Coffee House Press, A Collapses of Horses, made quite a splash back in February (we picked it as one of our favorite books of 2016’s first half). And now, seven months later, Tor.com Publishing is releasing his dark science fiction novella The Warren thanks to consulting editor Ann VanderMeer.

Like many of Evenson’s previous novels and stories, The Warren is both an existential nightmare and an addictive, transportative reading experience. But it’s also a unique addition to the Evensonian canon. Much like Jeff VanderMeer’s recent Annihilation, it channels the lonely exploration and problem-solving narratives of adventure games like Myst and Riven (or more recently, Obduction and Gone Home), as the last remnant of “a failed space expedition” seeks to understand himself and his adopted planet.

I recently spoke with Evenson about his writing process, worldbuilding, and the relationship between dreams and fiction.

Adam Morgan: How did The Warren come to you? How did you know it was finished?

Brian Evenson: I think it sprung out of Immobility. In that book, near the beginning, there’s a sort of makeshift suspended animation chamber above ground and a group of people living below ground, in the subterranean remains of a library, with the air between the two dangerous to at least one kind of person. That architectural model worked on me and grew into something else: the warren. The warren is a remnant of a failed space expedition. The character has to sort out his relation to both the warren and the planet around him.

In terms of knowing it was finished, I fairly quickly had the sense that what I was working on was novella length and as I continued to write the nature of the ending began to become clear. I knew when he reached a point of a certain knowledge and his departure from the warren seemed to be both a desperate act and a necessary one, that the book would over.

Adam Morgan: As with most of your fiction, the setting of The Warren is ambiguous. What do we gain from that knowledge gap?

Brian Evenson: I think it puts the reader into the same position as the main character of the story: he doesn’t know exactly where he is either. Or rather, he thinks he knows, but the information that he has about the place is so fragmentary that it may not reflect the reality of the situation. We get bits and pieces, hints, about what the warren might actually have been and where he might be, and slowly start to get our footing under us. As a reader, I personally like the experience of that, of feeling your sense of the world of the story shift and change with the story itself.

Adam Morgan: The Warren suggests a long, complicated history without going into details. How much of that history do you know? What did you decide to omit and why?

Brian Evenson: I can’t say too much about this without giving a lot away. I do know the history, and know it well enough that I could probably write another, more realistic novella, from third person, that would explain the world in a very different way and would be (at least for me) a lot less interesting. There’s a moment in Gene Wolfe’s Book of the New Sun that the astute critic Peter Bebergal talks about in his New Yorker article on Wolfe in which the main character describes a picture. What he describes is an “armored figure standing in a desolate landscape. It had no weapon, but held a staff bearing a strange, stiff banner.” Bebergal points out that “Careful readers will realize this as a photograph of the first moon landing.”

A similar translation is possible for a number of the strangenesses in The Warren: since everything is being seen through the perspective of the character, the world is being filtered in a very particular, peculiar way. But there is a world behind that filtering—nothing is arbitrary. Even the stranger details are gesturing toward SF writers I admire, people like Gene Wolfe, Joanna Russ, Iain M. Banks, Ballard, Alastair Reynolds, Cordwainer Smith, Greg Bear (Hull Zero Three), Delany and others. But often the source is distant enough that you won’t recognize it unless you’re really looking for it. And in a way it’s beside the point: I want you to experience the world as my narrator (with all his overlapped personalities) experiences it, and if I’ve done my job right as a writer, that will be where the enjoyment of the story lies.

Adam Morgan: When writing, are you a planner or an explorer? What was your process like for The Warren?

Brian Evenson: I’ve written in both ways, though I tend to be more of an explorer than a planner. With short stories, I’m very much an explorer and often have only the vaguest hint of where I might be going. That can be very exciting but also very frustrating, and can lead to a lot of abandoned stories… With novels, I tend to plan a little more and in one or two cases have written long outlines before beginning (in one case I wrote a 75-page outline that was so detailed that by the time I was done I wondered if there was any point in actually writing the novel–I still think I might write it, but feel that I have to forget the summary I wrote first).

For The Warren I’d had a vague idea for the novella for about a year and a half. I had maybe a handful of notes, less than half a page. I had the idea that there were issues that were raised in Immobility, about what it meant to be, or not be, human, that I wanted to keep exploring. Then I taught a class on the novella, a creative writing course, where we really looked closely at the possibilities of the form, and that made me really want to write it, but since we were getting our house ready for sale so as to leave Rhode Island for California, I was having a hard time finding a sustained block of time to write. Then I was away from my son Max and wife Kristen, teaching for a week at the Juniper Institute in Amherst, and thought “I’m going to try to draft this novella while I’m here.” I didn’t finish the draft, but got close enough to be able to continue working on it once I was done.

Adam Morgan: Where do you do most of your writing? And why there?

Brian Evenson: I don’t have a fixed place. I’m one of those odd people that can write pretty much anywhere, and often move myself physically if the writing isn’t working. I have an office upstairs and often write in it, but have written in almost every room of the house, as well as on airplanes, in hotel rooms, at friends’ houses, at coffee shops, etc. I wrote some of The Warren in my room at a bed and breakfast in Amherst, some downstairs in the same bed and breakfast, some at home. I guess I feel if you convince yourself that you can only do your best writing in one place, or that you always need this or that to be able to write, it becomes a self-fulfilling prophecy…

Adam Morgan: What is the relationship (if any) between your fiction and your dreams?

Brian Evenson: I find I have my most vivid dreams when I’m not doing much writing, so I’ve always thought of my writing and my dreaming as satisfying similar impulses. When the writing is going well, I don’t remember my dreams in much detail. When it’s not going well, I dream more and more vividly and remember them. I also like to write, first drafts in particular, late at night, when I’m tired and my brain is misfiring a little, when the subconscious is just a little closer to the surface.

Adam Morgan: Do you know yet what your next book-length project will be (i.e., novel, novella, collection, etc.). If so, how will it compare with your past work?

Brian Evenson: I’m always working on stories. I’ve got about a quarter or a third of the stories I want to write for a new collection. I have an idea for a new novel connected to The Open Curtain—not a sequel but connected thematically to it—but haven’t yet found the moment to dive into it yet…