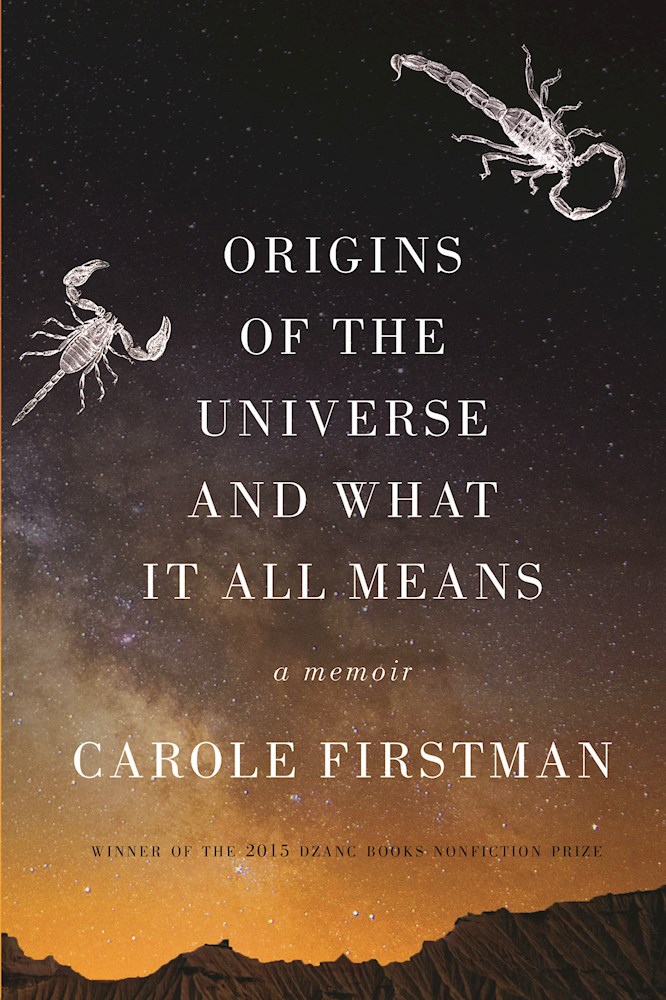 The essay is the scientific method of literature. The scientist creates a hypothesis and then continually tries to disprove it. The essayist calls on facts and research, but opens that data up to the organic uncertainties of experience and personality. Like the scientist, the essayist circles in to discover her subject, and for Carole Firstman, the subject is only the Origins of the Universe and What It All Means.

Firstman is aware of the grandiose claim of her subject matter, which is also the title of her memoir in essays. The words come directly from her father, a biology professor, free love practitioner, and somewhat absent parent. Firstman diagnoses him as both brilliant and mildly autistic. His often-repeated promise to explain the meaning of life on earth is both intriguing and infuriating, and these two forces pull each essay along. While her father studies scorpions to prove theories of evolution, Firstman studies her own memories to prove whether she is a good daughter, whether her parents were decent parents, and what her life—or any life lead well—is worth.

The trouble is that the scientific process is tedious, a problem that creeps into Origins of the Universe. Firstman often examines each memory many times, over several essays. She follows her father on a trail through the Sonoran desert. He casually mentions there may be snakes and then he darts off ahead. Firstman circles back to this moment again and again. Was she brave? Was he inconsiderate? Does she know him any better after the trip? The repetition does mimic the tedium of data examination, but Firstman fails to move beyond questions toward new discovery.

What Firstman lacks in new reflection, she makes up for with an interesting perspective on universal questions. Most parents struggle to discuss romantic relationships with their children, and most children struggle with the challenges of caring for their aging parents. Firstman recalls her father pulling out the karma sutra to explain why he hadn’t returned her phone call the day before and considers her role as caretaker for parents who are indifferent or dismissive. These moments could be very uncomfortable, taboo even, but they aren’t because FIrstman has carefully revealed her family as 3D characters. Tricky subjects such as body agency, mental illness, and aging are handled honestly. Firstman is never trying to save face or force sentiment, and in a memoir, that precision is refreshing.

Origins of the Universe is most interesting when Firstman moves beyond personal memory and uses the form of the essay to experiment. In one essay she explains the effect of a scorpion sting in the second-person present tense. “The first convulsion takes you by surprise—your arms tremble, your feet tingle, your lower abdomen contracts several times,” the reader moves slowly from paralysis toward death. In another essay she quantifies life achievement in volume by “potatoes.”

Now do this: Place each item on either the Big Potatoes or Small Potatoes list:

So, If potatoes is the same thing as square unites of quality

The detailed outline and equation makes me pause and apply Firstman’s equation to my life, how do my accomplishments measure up based on her scale of quality over years. These essays that move away from raw memory transport the reader from observer to active participant. In these experiments, Firstman offers an interesting and engaging way to consider life—hers and your own—and what it all means.