Imagine you’ve suffered a traumatic head injury. After surgery, you return home to find a house that keeps changing when you aren’t looking. A window moves a few inches overnight, a hallway seems narrower than it was yesterday. Eventually, you can’t say for sure whether you have three children or four.

So you go for a walk to clear your mind. You come across the corpses of four horses in a paddock. Behind them, a man is filling their trough with fresh water.

Are the horses alive and appearances deceptive? Has the man simply not yet turned to see that the horses are dead? Or has he been so shaken by what he has seen that he doesn’t know what to do but proceed as if nothing has happened?

Questions and images like these—unanswerable questions and unforgettable images—are at the heart of every Brian Evenson story. If you haven’t read any of his fiction yet, you need to get your shit together.

Ever since his debut collection led to a highly publicized excommunication from the Mormon church in 1994, he’s been quietly churning out gem after gem of literary horror in a singular, minimalist style. His prose is unmistakable, often exploring the darker side of humankind’s subjective, easily confused condition. His characters often pay heavy prices thanks to their hunger for understanding, or their fear of the unknown.

His new collection from Coffee House Press, A Collapse of Horses, is another fascinating, ruthless volume of weird fiction. Like his landmark collection Fugue State, at times the stories feel like a sudden onset of schizophrenia.

In “Black Bark,” for instance, two fugitives on horseback get lost in the mountains (people tend to get lost in Evenson’s fiction, both geographically and ontologically). After making camp for the night, one man tells the other a story about a piece of black bark that keeps appearing in someone’s pocket, no matter how many times he tries to get rid of it.

Finally he took the black bark out of his pocket, set it on the table, and picked up a hammer. But when he went to hit it with the hammer, it opened its eye and looked at him.

The listener’s desire to understand the story, “the story of everything black bark left out,” turns out to be his undoing. Similarly, the man with the traumatic head injury in the title story referenced above, “A Collapse of Horses,” who comes across the Schrödinger horse corpses in a paddock, is doomed by his need for the truth. When he can’t find the paddock a second time, he reasons that “horse” and “house” are “almost the same word,” and decides to “throw that so-called rock not at a horse, but at a house.” His own, of course.

In almost every story, Evenson evokes the horrifying feeling of suddenly realizing you’ve lost touch of what’s real and what’s not, that it’s too late to turn back and that nothing will ever be the same. In “The Window,” the sound of an intruder wakes a man up in the middle of the night. When he goes to confront the trespasser, he finds something “the size and shape of a human but not human at all.”

Meanwhile, in “Seaside Town,” a tourist searching for his hotel room winds up on “another third floor,” between the third and the fourth, where at night, he sees “a dark blotch of some sort, largish, much bigger than a man” in the courtyard beneath his balcony. What he finds ties in so neatly with the other stories, the collection begins to feel like a series of connected dreams.

Most of the time, Evenson’s brand of horror is purely psychological, where any speculative features could technically be explained as tricks of the mind. But every once in a while, he tackles meatier genre fare.

“The Dust,” for instance, set deep beneath the surface of an unknown planet, sees a crew of miners slowly driven mad by a powdery substance in the air. “You know how we keep all our cells inside our bodies, carrying ourselves around like a sack?” asks one of the miners. “The dust is what happens if you don’t have a sack.”

And then there’s “Any Corpse,” set in an unknown time and place where robotic “furnishers” harvest fields of flesh. They sell it to humans in nearby caves, who either eat it or attempt to reassemble and reanimate a corpse long enough to learn secrets from the other side of death.

If the publishing industry were a true meritocracy, Brian Evenson would be a household name on the level of Stephen King. You never realize how deep his fiction has wormed its way into your brain until hours, days, even weeks later, when you’re lying in the dark and Evenson’s images come flooding back, unbidden. A Collapse of Horses will stay with you for a long time…whether you want it to or not. 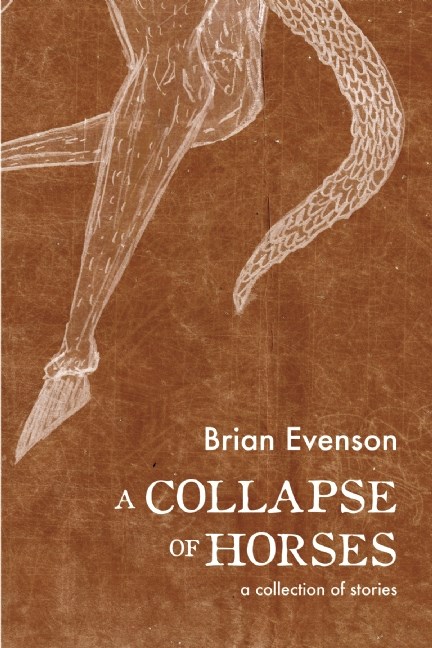 Pleasure, Pain, and Fear in “Jawbone”