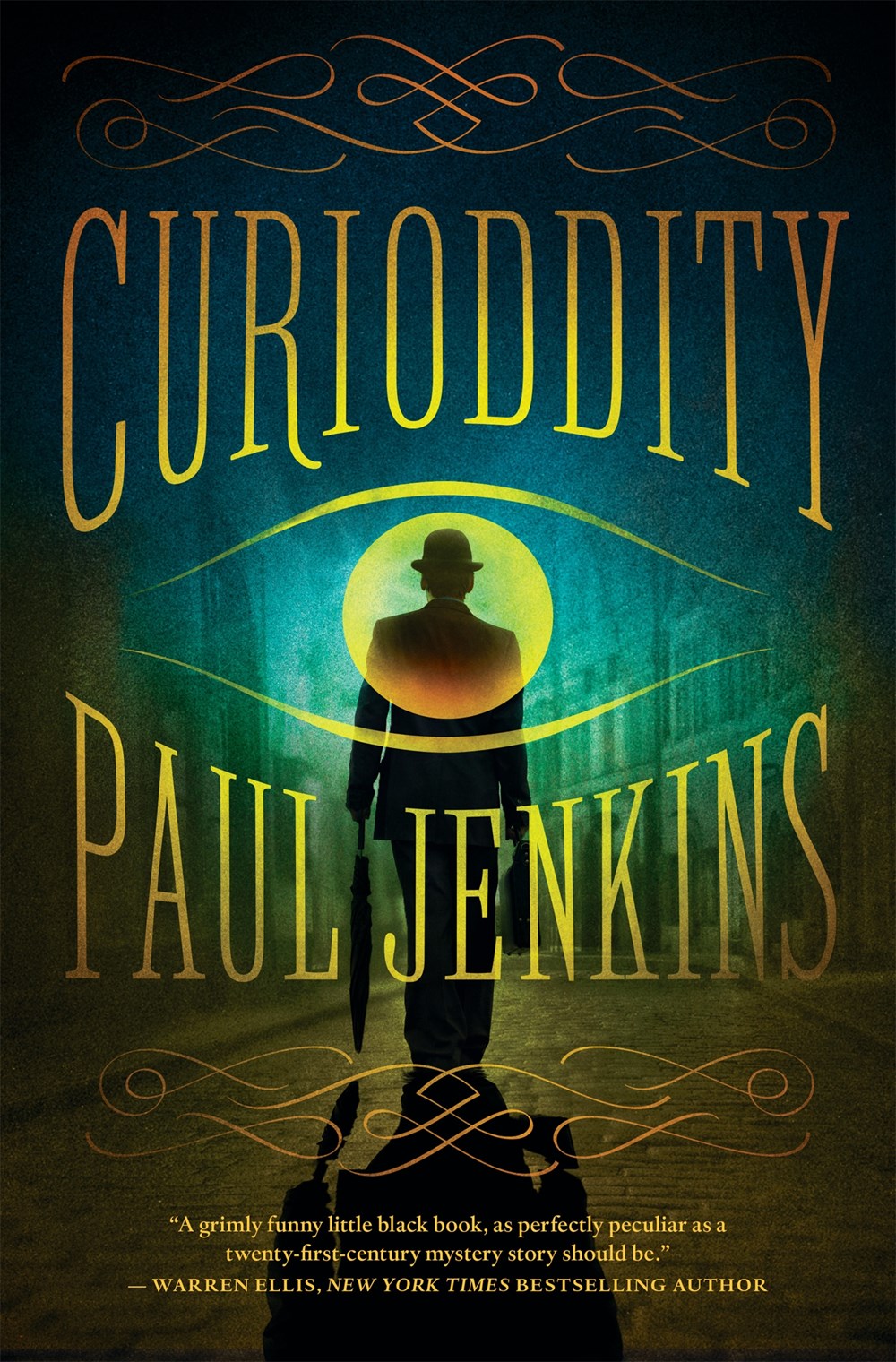 Not every writer can make a successful transition from one format to another. But Paul Jenkins—who has written for Marvel, DC, and major video game franchises such as God of War—manages to hit the ground running with his debut novel, Curioddity. The most captivating part of the book isn’t the upside-down street sign that leads to a museum hidden in the fog. It isn’t even the uncanny exhibits within, like a Perpetual Emotion machine and a green bottle labeled “Lightening Catcher.” Instead, it’s how Jenkins’s beautifully playful language expresses the importance of maintaining a sense of wonder as an adult.

Wil’s heart raced as he headed back into the cold, damp broth of Tuesday… His mind raced faster than his legs, and that old feeling of vertigo splashed inside his eyeballs with every step he took. His heart beat like the drummer for a seventies punk rock band and his lungs seemed to exhale twice for every time he inhaled…What Wil Morgan didn’t know at the time—what he couldn’t possibly know as he raced back to the safety of the world he understood—was that he had just fallen head over heels in love.

Long, inelegant similes and metaphors are generously planted throughout the book; the higher the page number, the more absurd the comparisons. This is Wil’s barometer as he works against his father’s pragmatic indoctrination in order to reignite his long-abandoned imagination. The more childlike he becomes with his willingness to believe in the unbelievable, the more creative his solutions to the unlikely problems he faces.

Since the death of his mother on the 207th day of his tenth year of existence (she was the source of his imagination), Wil approached every day as if in line at a hipster coffee shop…waiting to order a foolishly named caffeinated drink from a unconcerned millennial who somehow held the keys to the day’s happiness in a fruitcake in the stock room (I couldn’t resist). When a weird little man, Mr. Dinsdale, shows up at Wil’s office asking the “crack detective” to “unlook” at the world as he currently sees it in order to find a lost box of levity (the opposite of gravity) for his Curioddity Museum, Wil’s life of trudging along with the flow of traffic takes a sudden U-turn.

Dinsdale’s first request was merely a precursor for a much bigger mission that involves ninja bots and a nefarious, white-toothed businessman, Marcus James, who plans to nickel and dime the museum to the tune of $458 million, due Saturday. It’s Tuesday when the adventure begins. Wil enlists the help of his new love Lucy, his uninterested father Barry, a handful of paper clips, and a few calls to himself from the future as he embarks on the most important journey of his life.

Where Jenkins’s grasp loosens is pacing. Because comic books allow characters to breathe over the course of dozens if not hundreds of issues, the author has the luxury of taking time—not to mention imagery—to flesh out complex ideas. In a novel, the author must be careful not to lose momentum. In Curioddity, though Wil meets Mr. Dinsdale and Lucy and has an unexpected visit from his father, nothing much happens in the first third of the book. It’s not until he decides to take on Dindale’s mission that things begin to move with purpose.

Also, the years-long rift between father and son isn’t established sufficiently and is resolved far too easily. Though Barry is the only major character who is short changed, it’s important to note, though it will no doubt be eliminated by the next adventure. You don’t get to work with the characters Jenkins has without major storytelling skills and surely Curioddity won’t be Jenkins’s only venture into the world of long-form fiction. Whatever his next project, expect it to hit the scene with as much impact as when Wil’s girlfriend first introduces herself: “He was equally astonished when she smashed him over the head with and oversized copy of Leo Tolstoy’s War and Peace, though he was forced to concede as he fell to the ground, stunned, that this was a novel approach.”