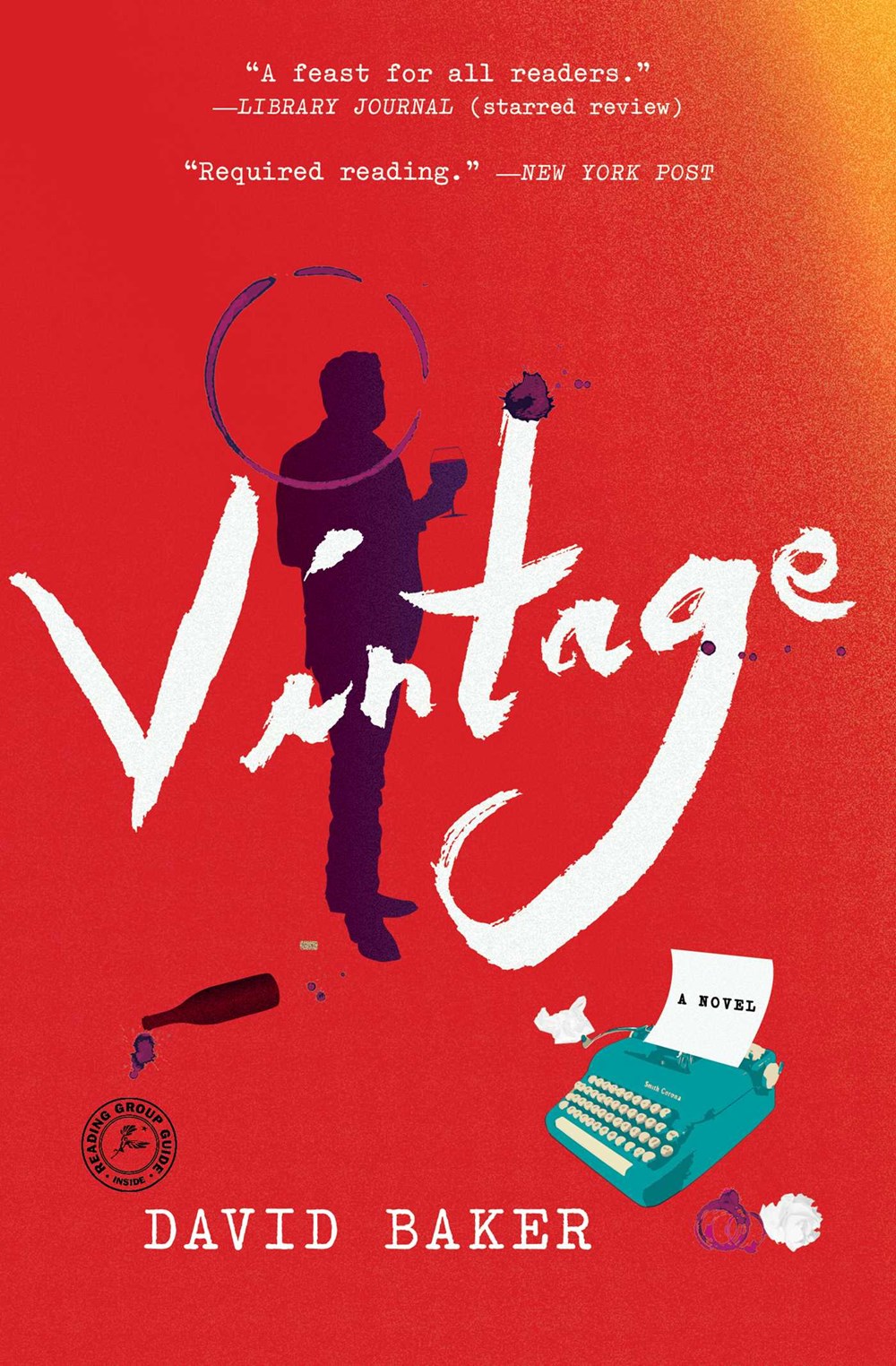 In 2015, The Washington Post ranked the top 10 food cities in America, with Chicago landing seventh on the list (ahead of NYC). It’s fitting, then, that David Baker’s unique food-and-wine thriller Vintage is set in Chicago, with adventures abroad in France and Russia.

Vintage is the story of a washed-up food and wine critic living in Chicago who embarks on an epic journey to find a rare vintage of WWII wine in order to save his career, the relationship with his family, and to cure his serious case of writer’s block. What results is a funny, danger-filled, romantic read filled with enough delicious food descriptions to make even the most well-fed reader hungry.

The author of this debut novel, David Baker, is a food and wine writer, himself, and a Chicago native now living in Oregon wine country. Vintage was published last year and is out in paperback today, July 19. I recently spoke with Baker about food and wine (obviously), his inspiration for Vintage, and the new projects he’s working on (one isn’t a book!).

Lauren Stacks: In Vintage, your descriptions of wine and food were one of my favorite parts of the book. For example, you write: “[Wine] isn’t some refined substance to be analyzed or studied and ranked on a scale of seventy to one hundred. It’s a story. A form of communication, meant for facilitating a conversation across a table and through the ages.” Tell me more about how you’ve honed your food-writing skills over the years.

David Baker: I’ve strived mightily to both cook and make wine over the years. Sometimes I’m successful, but more often than not what I create pales by comparison to those who do it really well. I have enormous respect for people who can pull it off, from my grandmothers to home cooks, chefs and winemakers I know or have interviewed. They all make it seem so effortless.

To write about food and wine, I think you have to understand the process, the ingredients and the people who make it. So trying to do it myself is a part of that attempt to understand. So when I write about it, I write out of this respect and reverence for a very real talent that eludes me.

But some of the greatest power from food and wine comes from its role as a facilitator. It brings people together. It marks occasions. It bridges cultures. So I think it’s also important to get beyond the basics of flavor, texture, balance and recipes and look at the bigger story of what it means to be humans who cook, drink and eat.

Lauren Stacks: Part foodie manifesto, part European mystery, the plot of this book is incredibly unique. Where did the idea for this tale come from?

David Baker: I’ve been fascinated by Burgundy since my first chance visit there with my wife many years ago. It’s a paradox: a tiny wine region that is a collection of little villages filled with humble farmers who make some of the most sought-after wines in the world. I’ve visited many times since and I always discover something new. Every square meter of the place is crammed full of history, food, culture and stories. As a writer, each place I visit screams to be the setting of a story, and few more so than Burgundy.

Years after that first trip, this character Bruno came to me. He was a pompous restaurant critic with a food-advice column, kind of like a culinary Dear Abby. It was a fun concept, because while he was handing out all of this advice on relationships, his personal life was something of a wreck. I wrote a few scenes from his point of view, but it wasn’t going anywhere. Then at some point I thought…what if I sent this guy to Burgundy? Let’s see what happens. Once I gave him a mission, his character evolved and the story started to take off.

Lauren Stacks: The book’s protagonist, Bruno Tannenbaum, is a washed-up writer with a bit of a reckless side, especially when it comes to good food and wine. He’s a character who could prove difficult for some to like. What do you think his redeeming qualities are?

David Baker: I hope that Bruno represents those flawed individuals who are complete screw-ups, but who also have redeeming qualities. Don’t we all have a friend, uncle, sibling like that? Bruno is reckless, impulsive and selfish. But he’s also passionate, charming and wears his heart on his sleeve. He loves his daughters and even his estranged wife. He’s always willing to give strangers the benefit of the doubt, whether it’s the wife of a Nazi officer or a jailed Russian oligarch.

There’s a scene where he shares a train car with a grouchy woman who refuses to move her bags from the only open seat in the compartment. Haven’t we all been in that situation? There’s someone on a crowded plane or subway with their bags in the empty seat basically saying, “I don’t want you to sit here. I’d rather stew by myself.” But Bruno gives that woman the benefit of the doubt and eventually uses a loaf of bread and a bottle of wine to coax her out of her malaise. He knits together a little, temporary family in that train compartment using the power of food.

That’s something I wish I had the courage and forgiveness to do more often. So I admire Bruno for the fact that his good qualities outweigh the bad. If we can forgive him his transgressions, we can forgive anyone. Maybe even ourselves.

Lauren Stacks: Early on in the novel Bruno is suffering from a severe bout of writer’s block. What do you do (or eat/drink) to get out of a writing funk, yourself?

David Baker: That’s a great question. It’s a tossup between walking in the woods or making something to eat. Better yet if you do both. Cooking is great therapy. There’s always the promise of a good meal at the end of the process.

Baking bread is probably my favorite thing to do. It’s so simple. There are just two ingredients: flour and water. Maybe add a little industrial yeast if you’re in a hurry. But then you just use your hands, time and heat and you can do so many things. Every loaf starts out like an adventure. How long do I knead it? Do I make a sponge and leave it in the garage overnight? What temperature do I bake it at? For how long?

It’s kind of like working with words. All writers have access to the same words…we just mix them up in a different order to make them our own. Maybe it’s a little Zen-crazy, but baking bread always reminds me that if you just work with simple ingredients you can accomplish little miracles. The dough feels alive in your hands, and at the end of the process you have this warm thing that you can hold and pet. You squeeze it a little and it crackles. The aromas it gives off are amazing. Slice it and smear on a little cheese. Open a bottle of Burgundy. There is nothing like a fresh loaf of bread that you’ve made yourself. It’s kind of like when you write a sentence that works. It’s addictive, and you just want to try to do it again.

Lauren Stacks: You lived in Chicago for some time, which is apparent from your depiction of the city—especially in your description of local foods like the Chicago-style hot dog. Now that you live thousands of miles away in Oregon, what’s the meal you miss most?

David Baker: Yes, I grew up in Chicago and the ‘burbs. There’s still no better, more vibrant food city around. It’s filled with classic joints and innovative new restaurants are opening all the time. I miss so many things, but the pizza is the one that really stands out. It’s true that our childhood pizza place defines our relationship to that dish for our entire lives. I was lucky that mine was Aurelio’s on the far south side.

But being in a city that has at least five major styles of pizza was liberating, and I miss them all. You could have a totally different style any night of the week: Gino’s, Giordano’s, Lou Malnati’s, Home Run Inn, Vito & Nick’s, Sanfratello’s and a thousand other little parlors that all put their own spin on it. I really miss that amazing diversity of pizza. Oh, and the Chicago-style dog. And the Polish with grilled onions. And Italian Beef with extra red sauce and sport peppers. Gosh, I’m hungry.

Lauren Stacks: I understand you’re hard at work on your second book. Can you tell us more about that project? Based on your recent trip to Beaune, France, can we assume there will be wine involved?

David Baker: Thank you for asking. I’m working on a novel about a single mom in a small town in the rural Midwest who’s addicted to cooking shows and dreams of opening her own restaurant. She finds an unlikely partner in a burnt-out sommelier who returns home after a stint on the West Coast. It’s called Flyover Country. Needless to say, there’s lots of food and wine in the story. I lived in rural Missouri for a number of years, and there’s a surprising slow-food culture and commitment to farm fresh ingredients there. It’s a reminder that great local food wasn’t invented in cities.

As for Beaune, I’ve just returned from a trip to work on a documentary film. It’s already been a devastating year in Burgundy, with a spring frost wiping out much of the 2016 crop. We’re covering this very rough season leading up to the annual post-harvest festivals (which were the model for a scene in Vintage) in November. It’s funny going back for the first time since the book came out, seeing a place I last visited in my imagination. It’s also inspiring. It’s making think that I may want to send Bruno back there someday. And the character of Sylvie, one of my favorites in the novel, herself a gritty Burgundian winemaker, is especially fascinating to me now. I wonder how she’d handle this year’s rough weather. Would she be able to survive? Who knows? Anything is possible.