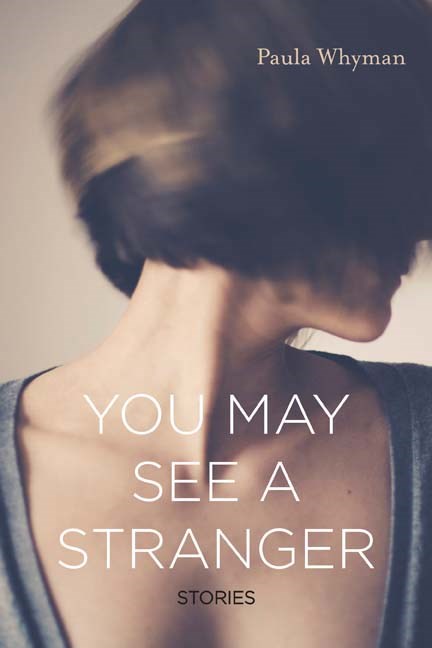 Humor can be difficult for a writer to successfully incorporate into their work, but Paula Whyman’s new collection of short stories, You May See a Stranger, is funny as hell, despite its darker moments. Astute, poignant, and rife with lovely prose, the book chronicles the life of Miranda Weber from high school to nearly forty years later, through a range of experiences and emotions in ten connected stories.

Paula Whyman’s work has been supported by fellowships from the MacDowell Colony, Yaddo, The Studios of Key West, and VCCA, and she was awarded a 2014 Tennessee Williams Scholarship in Fiction by the Sewanee Writers Conference and a 2014 Pushcart Prize Special Mention. A musical theater piece based on “Transfigured Night,” one of the stories in You May See a Stranger, is currently being developed by composer Scott Wheeler. I recently spoke with Whyman about You May See a Stranger. Here’s an edited transcript of our conversation.

Rachel León: Can you talk about the genesis of the collection? Did it start with an idea, Miranda’s character, a single story?

Paula Whyman: When the first story in the book, “Driver’s Education,” was published in The Hudson Review, I had no plans to write any other stories about the as-yet-unnamed protagonist. For a long time, I’d resisted writing stories set in places that were familiar to me or even set in cultures that were too familiar. But the early teen years, and coming of age, has always interested me as a subject. I’d written a few stories about people going through similar transitions in different settings; for instance, I wrote about a young girl in Thailand, and about a teenage girl in a city in the Andes.

Anyway, The Hudson Review, through their Writers in Schools Program, sent me to a high school in Harlem to talk about “Driver’s Education.” The students were curious about what happened next to the girl in the story. They couldn’t believe I hadn’t written anything else about her. I had no plans to do so, but sometime later, probably a good five or six years later, I noticed I was unintentionally writing stories that, with some tweaking, could be about the same girl but at different times in her life. I was working on a novel at the time, and I kept telling myself, “Oh no, you must not write a story collection; you must write a novel.” I went to a lecture given by Alice McDermott. She talked about how she always works on two books at once. One of these would eventually fall by the wayside, while the other would gain traction. (That was how she wrote That Night, which is a book I love, also about a young girl.) After that, I gave myself permission to set aside the novel and focus on writing stories, which I had been doing only while taking breaks from the novel. I was headed to a 3-week residency at Yaddo, and I decided I’d explore, through stories, what happened to the young girl in “Driver’s Education,” and I’d see where that went.

At Yaddo, I drafted two stories about Miranda and decided to devote myself to working on a book of linked stories. I made a plan, which I promptly ignored. Back then, I was going to write stories from different characters’ perspectives—Miranda’s children, her husband, her former lover, maybe one of her parents. I did explore those possibilities, but I didn’t end up using any of that material. Soon after Yaddo, I attended the Key West Literary Seminar and met Daniel Menaker, who became my literary agent. He encouraged me to keep going with the linked stories. I can’t tell you how rare it is to find someone in publishing who encourages a writer—a first-time author in particular—to devote herself to writing a story collection! I wrote the rest of the stories over the next year and a half. I always set out to write about Miranda through a series of stories—episodes that would connect to give a sense of her life. I might have chastised myself at first for writing stories, but the fact is I’ve written a novelistic story collection.

Rachel León: Did you write the stories chronologically or as they came?

Paula Whyman: I wrote them completely out of order, although the first one I wrote ended up being the first one in the book, as I mentioned. The last story I wrote became the second story in the book—“Drosophila.” When I looked at the stories set during Miranda’s later married life, I saw that I needed to show the early part of her marriage in order to provide more insight into what happens later. Of course, I didn’t know much about the early years of her marriage myself—I had to write it first. That’s when I wrote “Transfigured Night.” When I revised the book, I sometimes moved flashbacks from one story to another to see where they provided the most resonance. I think all of the stories jump around between past and present. Writing the book that way helped me find connections and explore the impact of the past on Miranda’s development.

Rachel León: It sounds like there were stories that didn’t make it into the collection. How did you decide which to use?

Paula Whyman: There was one story that was published in McSweeney’s Quarterly that takes place about ten years after the end of the book. It’s called St. E’s, and is narrated by Miranda when she’s sixty years old. We decided not to include that one in the book, for good, logical reasons, but I think it would be of interest to readers who are curious about one possible path for Miranda later on. There’s going to be an audio version of that story, broadcast on Audible’s McSweeney’s channel.

I wrote a couple of stories in other characters’ points-of-view that didn’t fit once I decided I wanted all the stories to be told by Miranda. Those might have worked as stand-alone stories, but I wasn’t interested in doing anything else with them at the time. I never know what I’ll do later, though. There are scenes in the book that had their origin in a completely different project, a draft novel I worked on while at The MacDowell Colony, before I thought of writing the story collection, and if I told you what that book was going to be about, it would sound very strange that I was able to borrow anything from it.

Rachel León: These stories offer snapshots of Miranda at different pivotal moments and they’re ripe with conflict, but we often don’t see the immediate aftermath; rather we experience the ripple effects of what came next in subsequent stories. How did you choose what to show and what not to?

Paula Whyman: I set the stories in what I considered pivotal or liminal moments. When people think of big life events, they often think of weddings, funerals, and childbirth. I didn’t want to portray those kinds of events. Instead, I wanted to show the experiences that I think shape a person. Of course I wasn’t sure what those would be for Miranda until I started to write them.

There’s a lot of movement in time in the stories—you may be in the present in the story, but there are scenes set in the past and references to things that happened in other stories. I didn’t think I needed to dramatize the events that occur in the white spaces between the stories, because readers would “get it.” I’m a big fan of Virginia Woolf’s To the Lighthouse, and in the middle section, called “Time Passes,” the people are gone, and events occur that are mentioned but not dramatized. I think of the white spaces between the stories as my approach to “Time Passes.” The people are gone, events occur. There’s drama in those gaps, I hope, so the place and time where the reader drops in will seem both surprising and inevitable.

Rachel León: I love the humor in your work. Can you talk a little about writing with humor?

Paula Whyman: I’ve written humor essays and shorter pieces for various places, including The Washington Post and, recently, Barnes & Noble Review. As for my fiction, humor has always been part of the picture, because that’s how my mind works—when things get too serious, I can’t help making a joke. In the story collection, I needed Miranda to be clever so that the dark, serious things I was writing about her would be palatable to me. I have, in the past, written a couple of short stories that contained no humor at all—I’m not even sure how I accomplished that—and they make me cringe to read them now. Other people may not cringe, but it makes me uncomfortable and claustrophobic. I think there’s so much that’s difficult in life, if we can’t allow ourselves to laugh at our situation, we’re doomed. On the other hand, if we’re doomed, we may as well be amused.