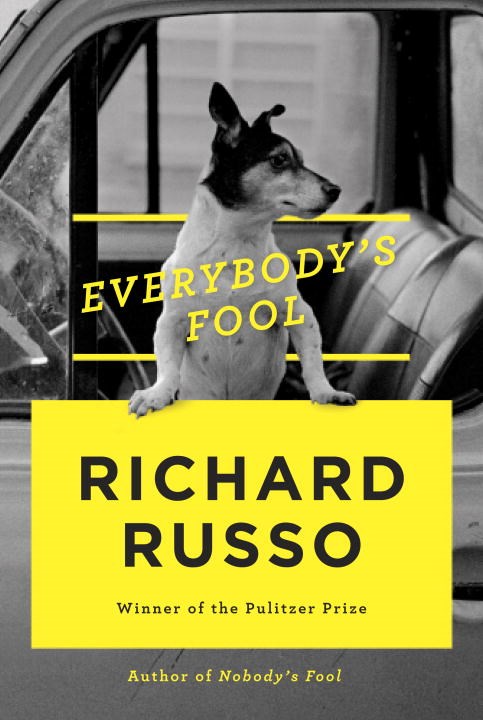 More than two decades since his breakout hit Nobody’s Fool, Pulitzer-prize winning author Richard Russo has returned to the same set of characters in the run-down mill town of North Bath in his brilliant follow-up, Everybody’s Fool.

While the original novel focused on the grumpy, gambling, arthritic Sully, the second book follows Douglas Raymer, the newly-minted Chief of Police. After visiting every nook and cranny of North Bath and Schuyler Springs, Russo explores the heart, humility, pain, love, and friendship it has to offer.

Russo is in the Chicago suburbs this week and will appear at Anderson’s Bookshop in Naperville on Friday, May 13 at 7 p.m. and Wilmette Jr. High School Auditorium on Saturday May 14 at 2 p.m. I spoke with him about how the tools of time and place framed Everybody’s Fool, and how he knew he was ready to revisit these characters.

Lisa Katzenberger: How long did you think about writing a sequel? How did you know you were ready to revisit these characters and continue their lives?

Richard Russo: It came as a result of a couple of true stories that were told to me. One was a story of a guy whose wife had been bugging him to prune a limb from a tree on their property. Someone was supposed to bring over a ladder or something like that, and whoever it was didn’t show up.

And the guy, frustrated, tied a rope to his belt and tied the other end to his chainsaw and managed to climb up and sit on the limb he was going to prune, and pulled the chainsaw and sat with his back against the trunk of the tree. He started up the chainsaw, severed the limb, and of course the limb falls, leaving him sitting on that nub. He lowers the chainsaw back down to the ground, unhitches the rope from his belt and only then realizes that the limb that is now on ground was something he was going to need in order to rotate on the nub and shimmy back down the tree. This guy had to sit up there all afternoon waiting for his wife to come home from work and find him.

When I was sitting at the dinner party where this story was being told, I thought to myself, “Well, good Lord, who would do something like that?” and immediately my old friend Rub Squeers, Sully’s sidekick, came to mind.

It got me thinking about what Rub’s life has been like since his luck began to turn. And of course Sully was based in no small part on my father, and it began to dawn on me that if I were to go back there and resurrect Sully, I would in a sense be resurrecting my own old man, who was wonderfully entertaining, and who I’ve been missing, so that was another reason to go back.

And then there was another story, the second true story, which gave me my main character in this book, because I knew it couldn’t be Sully.

This was a story I heard about a cop in a small town who had found a garage door remote in his wife’s car, and it didn’t open their garage. And he immediately lept to the conclusion that his wife was having an affair. He went around town with that garage door remote to see whose garage it would open, thinking that he would identify his wife’s lover.

Again, I asked the question, “Who does this remind me of?” And it reminded me of Sully’s nemesis in Nobody’s Fool, and I thought, “Officer Raymer is probably the Chief of Police now, and that’s the sort of thing he would do.”

Those two things coming together suggested that it might be time to go back to North Bath.

Lisa Katzenberger: I’d like to talk about how setting influences and impacts character. What do you think would happen if you transported Raymer, Sully and the gang from North Bath to Chicago? What would that do to them?

Richard Russo: I don’t know that they’d go there. Raymer certainly wouldn’t be the chief of police of a metropolitan area. I think you can only fail upward—like he does in this book—in a small town.

All of these people—their lives, their destinies—are connected to where they live, the size of the place. Take Carl Roebuck, for instance, who is the town Lothario. It’s hard to imagine steering that into a more sizeable community.

In Bridge of Sighs, Lucy Lynch has what he calls his rounds. He’s all over town, talking to people who jokingly refer to him as the mayor, and I think that’s true of Sully, too. But Raymer hasn’t had that worldly experience that Sully has. His sense of identity is connected to the way other people feel about him—even from a very small geographical area. He has no sense of himself except as a reflection of what other people have told him about who he is.

And all these characters, their sense of who they are is so tied to place, so tied to geography, and I suspect that that’s true for them because it’s true for the person who created them. I’ve gone out into the world and lived a different life than most people in my family have, but my imagination and my sense of identity is still tied pretty closely to towns like North Bath and Mohawk and Empire Falls—they are the ground zero of my own personal identity. So it’s not terribly surprising that that link should be there for my characters as well.

Lisa Katzenberger: Why did you decide to tell the story in such a compressed timeframe, over a single Memorial Day weekend? How did that limitation influence what you could explore in these characters?

Richard Russo: I never know why I do things at the time I decide—it just seems like a good idea. But it seemed like a very good idea to put these characters on the clock that way. We go back into the past with their backstories, but we really keep the story moving.

And that was very much “a winter’s tale.” And I think when I came to this book, there was probably something in the back of my mind, some instinct that said since Nobody’s Fool was a winter’s tale, that this would be a summer’s tale. And since it worked there, maybe the thing to do was to treat time in the same way in this book.

And what happens of course at the end of Everybody’s Fool, it pleased me when it happened, because you’re on the clock when you make that final narrative turn, and you’re headed down the home stretch toward the end of the book. The last 75 pages or so of this book is more of a juggernaut than my other novels because of the fact that I’ve treated fictional towns in this particular way.