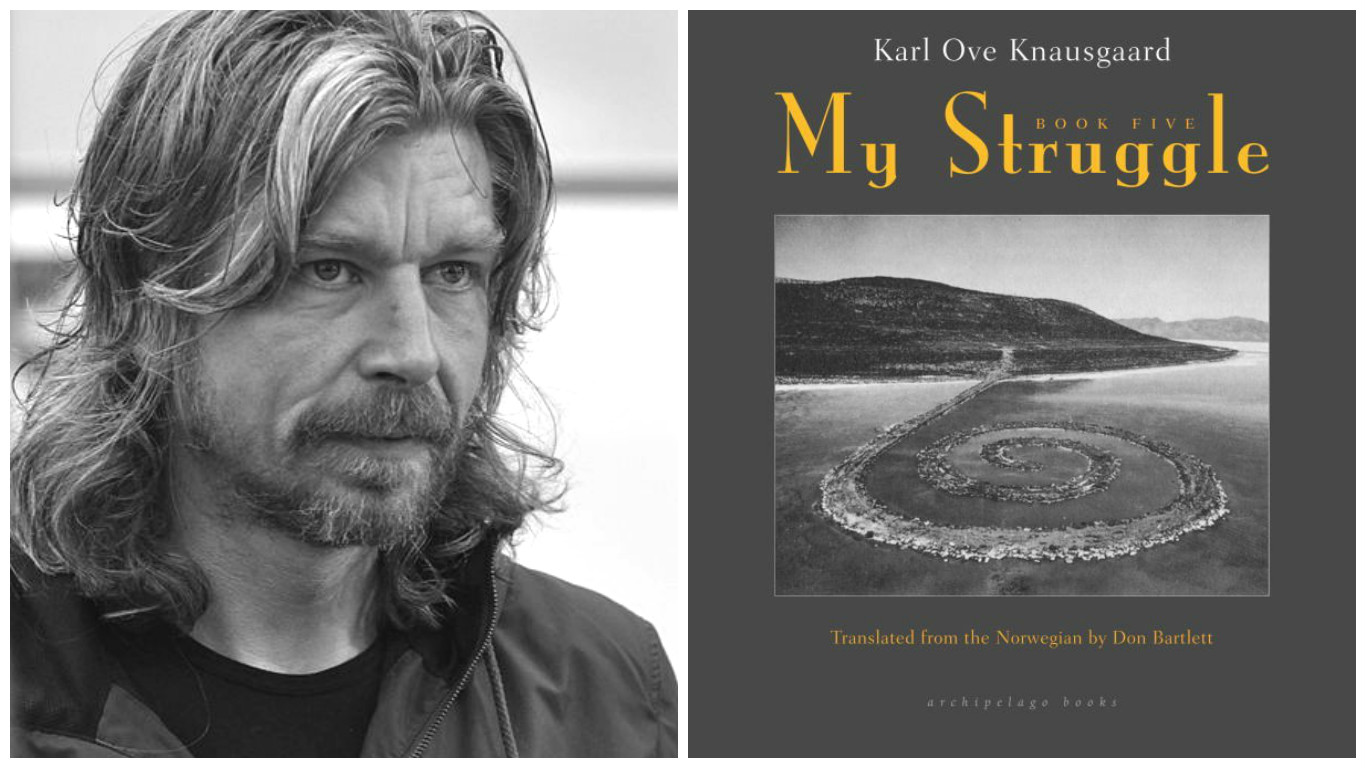 Karl Ove Knausgaard‘s 3,600-page, six-volume, autobiographical novel about the minutiae of daily life and death in Scandinavia has become an international sensation so grand, The New York Times unironically called it a movement.

Last month, the fifth book in Knausgaard’s My Struggle series was released in English, translated from the Norwegian by Don Bartlett. Also last month, Knausgaard made his first-ever trip to Chicago, where he spoke with Sheila Heti at the Chicago Humanities Festival about literary ambition, the price of success, and the books he’s written in Norwegian since finishing My Struggle. Here’s a partial, abridged transcript of their conversation.

Sheila Heti: So we’re here for book five, which spans your life between the age of 19 and your early 30s. Can I say ‘you’?

Knausgaard: Yes, it is me.

Sheila Heti: I feel like this book, more than the others, is about your literary ambition as a young man. How do you regard that ambition from the perspective of today? Because in the book it’s this desperation to get published, and obviously now you’re at a completely different point in your life.

Knausgaard: When I first wanted to be a writer, it was because I was a reader. I read so much. So it was a natural thing to want to be a writer. The most important thing, I think, was that I wanted to be seen. I wanted to get a novel published, and it seemed like it was completely impossible. It seemed like it was completely out of reach. I’m not that kind of person, I can’t really write a novel. And then I did.

When I was 29 and my first book came out, it was a minor success in Norway and I achieved everything I ever wanted. And then I realized: no, this is not it. It’s the writing that’s the thing. So after the first book, it took me 7 years before the next one came out.

Sheila Heti: Have you been “put off your path” as a writer by all this success?

Knausgaard: It is very overwhelming, but My Struggle is also liberating because I just write…I don’t care about anything. The style doesn’t have to look good. I just write. I’ve written five books since My Struggle was published.

Sheila Heti: Five books? Are they autobiographical or quite different from that?

Knausgaard: I wanted to write something truthful or something honest or something real. And I think probably if a book sells good, it really isn’t any good but it still is just moving.

Sheila Heti: Are you saying that, the five books since My Struggle … you don’t think are as good?

Knausgaard: When I studied, when I was meeting literature for the first time, that’s the period I’m describing in book five. I was the kind of kid who came home with two bags of books and just read everything. And I was writing that way, too, when I was 19.

Then at the writing academy, I realized that I was reading the best literature, the real literature. I realized that it was not waiting on me. It was like I was running into a wall, because I realized, I can’t do that. But still those books, that hardcore classic modernist writing, is still what I consider the best. I tried to write like that, for many, many years. And My Struggle is opposite of that. It’s like saying goodbye to [real literature] and just pouring everything out.

I felt like this isn’t quality, this isn’t good, this isn’t real. But it has something else. It has an energy and directness, which is good. But still, I’ve never felt like this is really good literature. You know? So I just write, and those books, the My Struggle books, were written with my heart. The next books [the five books since], I haven’t invested my heart and my soul in them. So that’s why I think that maybe they’re not burning like [the My Struggle] books are.

Sheila Heti: Do you know why your heart and soul haven’t been in the books since?

Sheila Heti: I wonder what the word “research” means to you? If that comes into your process with any of your books?

Knausgaard: In My Struggle there is no such thing as research. They’re completely based upon memory. And I thought when I start it should only be what’s in my head. That’s real. That’s my starting point. And even though I wrote something … For instance I’ll show it to my brother and he’ll say, ” No, it didn’t happen that way and I can prove it.” I kept it in my way in the book.

So there is no research, but then in book six—which will come out next year or something here—I wrote a little essay about Adolf Hitler…but it’s not “research,” it was like obsession. I was just reading about him, about the era, about Nazism, about Germany and all kinds of stuff.

Sheila Heti: I’ve just noticed reading all of these books that there is a notable absence of therapy. There’s no psychoanalysis, which is kind of interesting, because you’re writing about yourself. So many people who write about themselves go into that. Is it a cultural thing, or is it that you don’t have an interest in that mode of thinking?

Knausgaard: I think that’s purely cultural. My wife once suggested that we go to couples therapy and I said … and this sounds kind of weird … that I’d rather shoot myself in the head. [In the culture I grew up in] you are supposed to take care of things yourself. So you don’t even go to the doctor unless you are dying.

Sheila Heti: I’m Canadian, and we have socialized medicine. Your country does too. Everyone I know in Canada goes to the doctor all the time because it’s free. Your toe hurts, you go. But in Norway and Sweden you just wait?

Knausgaard: Yes, where I come from is like that. My mother, she’s a psychiatric nurse, so I was raised talking in that type of analytic language about this stuff, and about her stuff, and about her friend’s stuff in an analytic way. You know? I’m used to thinking in those terms about myself and other people. But it doesn’t really help understand what’s wrong with you. I still feel bad when I wake up in the morning.

Sheila Heti: At one point in book five, you called the desire for fame “the desire of a child.” And before that, you wrote a piece called “I Am Someone, Look At Me,”about how in Scandinavian culture you’re not supposed to think you’re better than anybody else, because it’s very shameful to—

Knausgaard: —It’s not shameful, it’s impossible. When I was twelve, thirteen, fourteen, it was impossible to be very different. You’re not supposed to think you’re special, you are only one of us. And that is one aspect of it that’s very cruel, because that leads to bullying and to people telling you [you don’t fit in]. But it can also be a good thing, this solidarity, this not thinking about yourself. It’s thinking about us. So it has both sides.

But music is outside of this world. It’s on a stage, and you’re supposed to do something original or be special. You’re allowed to wear a red hat if you want to, because you’re in a band.

Tragedy In The Year Of Power

What Can the Humanities Do For the Environment?

Finally, a Knausgaard Book You Can Read on the Bus