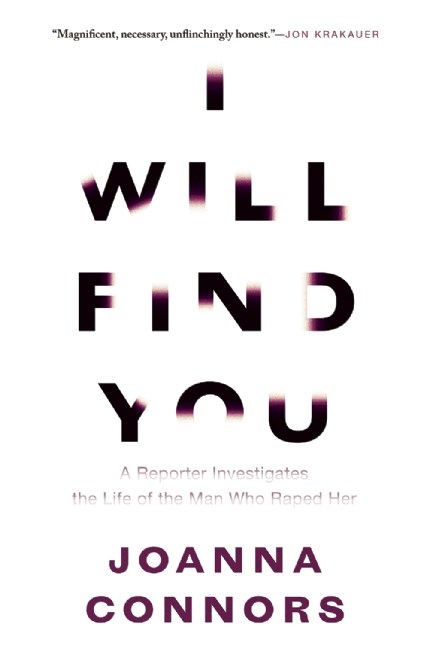 Joanna Connors was 30 years old when she arrived late to review a college play for the Cleveland Plain Dealer, unaware her life would never be the same. On the campus of Case Western Reserve University, a stranger held her at knifepoint and raped her, a horrific attack that left Connors depressed, ashamed, and perpetually afraid.

Suffering from PTSD, she found herself in a constant state of vigilance that interfered with her professional life (being in a dark theater alone to review movies brought on intense panic) and her personal life (when she became a mother, she couldn’t stop herself from seeing others, even her husband, as a threat to her children). That day in 1984 left her with an everpresent fear. “As it grew, it strangled a lot of other stuff in me that should have been growing,” she writes in I Will Find You: A Reporter Investigates the Life of the Man Who Raped Her. “It killed my courage and joy. It killed my trust in the world.”

Her rapist was caught and sentenced, but her fear never went away. Connors never talked about it, until her daughter was heading to college and she felt the need to explain why she was such an overprotective mother. As they toured college campuses covered with “blue lights” designed to protect women, Connors knew they weren’t enough to stop attackers like her own.

After telling her children about her rape, Connors decided to look closer at the life of David Williams, the man who attacked her:

If it’s true that fears grows out of ignorance, which I believe, then maybe I needed to confront the ignorance to get at the fear. I needed to learn more about the man who stood above me and pushed my head toward his penis, the man who I thought would be the last human being I would see on this Earth.

What follows is a fascinating journey, as Connors chronicles the rape and its aftermath, Williams’s arrest and trial, and then decades later her investigative search for answers about his life. She not only searches public records—trial transcripts, arrest records, incarceration history—but even seeks out Williams’s family and friends. Weaving together memoir and journalism, the book offers a deeply moving, personal story while examining issues of race, class, and violence against women.

Other memoirs have been written about rape experiences, such as Alice Sebold’s Lucky, but I Will Find You is more than just Connors’s personal story. As a journalist, she manages to stay amazingly objective, even while tackling such a deeply emotional topic, resulting in a chilling, eye-opening combination of memoir and reportage.

While the narrative structure can seem a bit jarring at first, Connors’s honesty and openness are stunning and inspiring. Her careful and thoughtful examination of her own suffering, as well as her willingness to look deeper at the man who hurt her, make this one of the most compelling, unique books of the year.

NONFICTION
I Will Find You: A Reporter Investigates the Life of the Man Who Raped Her
by Joanna Connors
Grove Atlantic (Atlantic Monthly Press)
April 5, 2016
ISBN 9780802122605

Tags
I Will Find You Joanna Connors Sexual Violence