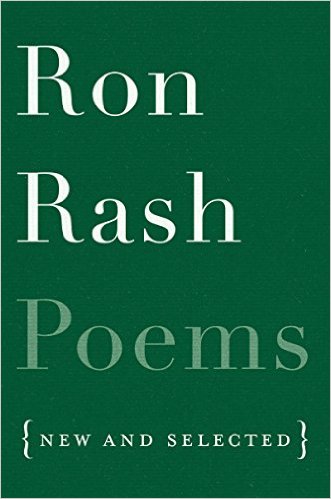 Ron Rash writes poems for the flawed and for the worst of us. Again and again he finds quiet, broken folks and tells their stories with stoic simplicity, with language that’s both barren and lush as the change of seasons. His pastoral death poems are anti-hero and anti-love. They’re all Appalachia and awe-inspiringly beautiful.

In Poems: New and Selected, Rash—a Western North Carolina writer known for his novels (Serena, 2008) and short fiction (Something Rich and Strange, 2014) than poetry—crafts poems that are nearly plowed over by death. His poetry is filled with ill-fated people, and he tell their stories honest and hard.

In “Black-Eyed Susans,” a husband lives on after his wife passes. Though Rash writes simply, there is nothing simple about their story. The poem isn’t even about the love they shared—it’s about the wife’s true, first love. So we find her second husband in the wake of her death, remembering the night he sat by her side as she called out another man’s name. Rash writes unforgivingly about a man left to spend the rest of his days in second place.

black-eyed susans, the same kind
growing in my yard, a note
tight-folded tied to a bow.
Always was all that it said,
which said enough for I knew
what grave that note belonged to.

Despite the heartache, despite all the bodies that this book of poems buries, Rash still writes both lovingly and longingly for family, and for the home that has kept them there centuries over.

Good writing about place often works in such a way and Rash writes the narrative of the southern Appalachian mountains as if it’s a family rite—as if he is solely responsible for keeping it alive. It’s clear that he cares deeply for the task. “Memory is always the easiest thing to love, to keep alive in the heart,” he says.

For Rash, telling Appalachia’s tales is like breathing or batting an eye—he has an innate ability to narrate a place and its history. Pastures, sheds, and streams, along with age-old tales and the god-fearing folk that worked that land, fished those waters, sat and died beneath those waving trees. Rash walks among their gravestones and it’s easy to get lost within his world. It’s a pleasure doing so, which says a great deal about his care and control.

While Rash’s poems deal with place, they’re about more than just forest and ancestry. He is a cartographer complete, deftly dealing with every part and piece of a place. His poems can pick up a pebble and tell which mountaintop it toppled from, which age it came from, and who felled it. For Rash, everything is kin, and he takes great pride in drawing up a map to show those connections.

Where North Carolina locks
like a final puzzle piece
into eastern Tennessee,
old songs of salvation rise
through static in Sunday night
in this mountain country where
my name echoes on gravestones
dimmed by time like the evening
a kinsman held fire

His poems show the way, but not by the light of a lantern, taking us to pastoral deathbeds through the gentle calm of night, and around each corner some other character awaits with an “owlshead pistol crouching like a panther in his pocket.”

At times Rash murders and meanders, but it’s his concision that stabs like a knife. Piercing clarity. We might wish for happier endings as he unsheathes swift sentences that tell what fears will come, but while we cringe and pray for something else, Rash always takes us on a gorgeous, rural route, no matter how terrible. His poems have hundreds of ways to go, safer trails to travel by, but with an honest opine he says, “That did not happen.”

“The Preacher is Called to Testify for the Accused” is a testament to Rash’s tight-knit narrative mastery, a story of murder and the sinful nature of the victim’s very presence in this world. Adam and the Apple. Jesus and Judas. In Rash’s poems, God is at work—no matter how tragic, poem after poem is filled with preachers and “Pentecostal Doom,” marred by mysticism and the occult—as if some sort of backwoods black magic is at odds with what’s holy. According to Rash, both paths lead the same way.

Time Travel and Moon Colonies in “Sea of Tranquility”

And though there were two paths he could have taken
he took the one that followed Middlefork
although the other path was better worn,
had fewer roots to trip on in the dark.

Far too often, writing about place is reduced to a landscape, to rich and vivid descriptions of physicality. Rash certainly does Appalachia justice and captures all of its natural glory, but for him, writing about place is less about looks and more about a mix of sounds. He knows how to hear, and he has a gift for echoic memory—sensory detail as it applies to patterns of speech—for capturing the sounds of a region and the way people and true beauty make voices there.

He notes the importance of sensory awareness as a means to truly gain the world in his poem “Good Friday, 1995, Driving Westward,” likening it to a kind of ancient translation.

And so I learned to see the world
as language one might understand
but only when translated by
signs first forgotten or misread.

Ron Rash’s Poems: New and Selected acts as interpreter, cryptographer, and historiographer. His poetry transcends hundreds of years—familial history forgotten, misread, and unknown. His makes a stubborn and unchanging place accessible to us, to family that forgot, and to anyone who looks to one day return to a place they miss. Ron Rash sees the American South as only a mystic preacher and time traveler can, and he’s damn sure worth listening to.