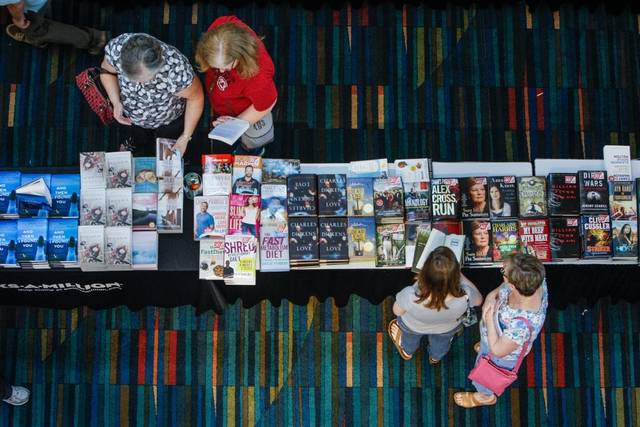 Last July, South Carolina’s artsy capitol suffered a devastating blow. The state Humanities Council canceled the beloved SC Book Festival, a 20-year-old literary festival that drew thousands of readers and writers to Columbia every year. In its place, smaller book-related events will be evenly spread throughout the state, year-round.

Thankfully, academic and literary figures dismayed at Columbia’s loss stepped up to form the brand-new Deckle Edge Literary Festival, which opens with a film screening tomorrow evening and runs through the weekend. I spoke with Annie Boiter-Jolley—one of the founders of Deckle Edge, along with Cindi Boiter, Jonathan Haupt, and Lee Snelgrove—about planning the inaugural festival and celebrating Columbia’s role as a literary hub in the New South.

Why did you decide to start your own literary festival in Columbia when the SC Book Festival was canceled?

While we understood the reasoning behind the Humanities Council’s shift in focus, we thought it was important that South Carolina continue to have a book festival in its capitol city. It was a tradition that we, and a lot of other folks, weren’t ready to say goodbye to.

Do you have a sense of why the SC Humanities Council made that decision? Were you shocked?

It did come as a surprise, but I can understand how they wanted their literary programming to evolve into much more of a year-round, state-wide campaign. Fortunately for those of us who wanted to see the festival aspect continue, the Humanities Council has been very supportive of our endeavors to do just that – they’ve shared their wisdom and resources, and the festival itself has been a beneficiary of the new state-wide focus through a Fast Track Literary Grant.

How will Deckle Edge differ from the old festival? What sets it apart from other literary festivals around the country?

While we’ve tried to maintain a good bit of what authors and attendees loved about the SC Book Festival, we’ve also taken the festival in new directions. Deckle Edge, while still centered around books, is a literary festival – and we’re working with a pretty broad range of what falls in that category.

This year, we have programming (panels, reading, workshops, etc.) in the more traditional categories: fiction, poetry, nonfiction, the South, romance, mystery, etc.; as well as some non-traditional areas, like writing for comic books and video games, songwriting, social media for writers, ant others. And we’re eager to see how festival-goers respond, especially as we start planning Deckle Edge 2017.

Another big change is the location. For the past several years, the SC Book Festival has been held in the Columbia Metropolitan Convention Center. While logistically, the convention center was an ideal location, we wanted Deckle Edge to showcase Columbia more than a single location would allow. So this year, the festival will take place at a handful of venues on and around Main Street, as well as in a couple of Historic Columbia homes.

For the most part, the venues are located on the 1500 and 1600 blocks of Main Street (the Columbia Museum of Art, Tapp’s Arts Center, Agape Conference Center, etc.) with a couple of outliers. While the distances between venues won’t be far, we hope that people – especially those from out of town – will get a better sense of the city by getting out and walking the streets between panels and events.

Why is Columbia, SC a vital cog in the nation’s literary community?

Columbia is much more of a literary town than it often gets credit for, and it’s growing. Over the past several years there’s been a cultural renaissance in the city at all levels, including in the literary arts. In the Midlands there are probably 10+ active grassroots poetry collectives (both spoken word and page); burgeoning literary journals that attract international submissions; a growing number of boutique publishing houses, not to mention a large university press; and a real sense of community.

For many years the Richland Library has held the Local Authors Showcase (which is happening in conjunction with Deckle Edge this year); projects like Art from the Ashes (Muddy Ford Press, 2015) bring writers together with visual artists and historians demonstrating the collaboration we often see between the literary community and other arts; and this year’s One Book, One Community selection (The Stone Necklace, University of South Carolina Press, 2016) was written by a Columbia author (Carla Damron) and prominently features the city itself.

Columbia and the writers and readers who live here are very actively involved in developing our presence on the national stage, and not just resting on the rich literary tradition that we are lucky to have. Yes, we lay claim to the likes of James Dickey, but we also know that authors like Julia Elliott are at the crux of Columbia’s literary future.

What measures will you use to determine whether the inaugural festival is a success?

We’ll be keeping attendance counts at each panel, reading, and event; we don’t expect crowds quite as large as have turned out for recent SC Book Festivals (though we hope to get them) since this is our first year out and people are still learning about the festival, but we do hope that our location on Main Street will help us pick up some foot traffic and new audiences who might have been less inclined to commit to a weekend at the convention center, but who are curious enough to stop in for a panel or reading and get hooked.

We want a decent, happy crowd at each session, and for participating authors to feel like the experience was worth their while. And we will be taking copious notes for next year.

What do you hope for in the future of Deckle Edge?

We’re really looking forward to having a whole year to plan next year’s festival. That’s probably been the biggest challenge – we really didn’t want Columbia to go a whole year without a book or literary festival, which meant that we were working with a seriously abbreviated calendar when it came to planning. In the span of about six months, we’ve not only planned this year’s Deckle Edge, but had to figure out what Deckle Edge was even going to be.

Having a full year to plan Deckle Edge 2017 will give us a lot more flexibility not only when it comes to authors’ schedules and venues, but also in terms of involving and responding to the suggestions of even more community partners. Going forward, we want to maintain the intimate feeling of this first year, but hope to achieve a level of regional and even national prominence as well.

We want to continue to showcase what Columbia and South Carolina have to offer, but also bring even more authors and literary artists from other parts of the country to share their talents with our city.

The Unique Dialogue Between Present and Past in “Low Country”