April Book Giveaway: 3 Novels for the Price of None 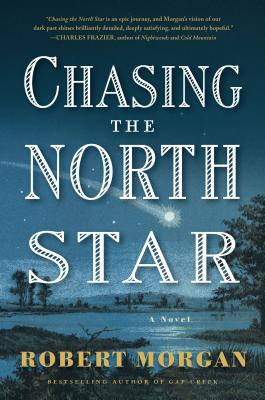 Robert Morgan—the North Carolina poet and author of Gap Creek—adds “slave narrative” to his sub-genre toolkit with Chasing the North Star, his new historical novel from Algonquin Books. While his depiction of slavery isn’t grounded in the same realism as, say, 12 Years a Slave, and he too-often commits the narrative sin of convenience, it’s still a gorgeous book full of lush prose, compelling characters, and an epic journey across America ten years before the Civil War.

Escaped slaves Jonah, of the Williams plantation, and Angel, of the Thomas plantation, are reluctant companions who set off on a long journey from South Carolina to Canada. For Jonah, the last straw was a severe lashing for “stealing” books. What his master doesn’t know is that he’s acquired a level of literacy while sitting in on the white children’s reading lessons.

Angel, on the other hand, is a savvy free spirit who finds herself drawn to Jonah from the moment she meets him in the forest. The two runaways then traverse Morgan’s vivid landscapes from one harrowing circumstance to another, like rivers through mountains.

Despite Jonah’s repeated attempts to leave her behind, Angel fancies herself Jonah’s guardian and follows him north to freedom. She is connected to him through the charming belief that “with love in her breast, a woman can go on.” It’s her point of view that provides some of the novel’s most arresting language; when her only dress has become too ragged, she steals a piece of fabric along the way to make a new one:

The shiny gold fabric was going to fit my body, the color of the cloth lighter than the deep gold of my skin. But the cloth was no softer or smoother than my skin. With every stitch I was sewing my future. If clothes make the girl, I reckoned I was making myself, what I would be. Pretty cloth to cover my beautiful skin.

Angel’s self-perception is such a relevant and welcome idea, both in the context of the novel and the representation of black women in contemporary media. Jonah is not without his moments of rich language as well. “The Bible was a home he could take with him,” Morgan writes, “however difficult its message was to understand,” conveying a longing that feels real in a story about a slave marching his way to freedom.

The most significant challenge the narrators are tasked with, however, is making us believe in their good luck. Jonah is either directly given or accidentally finds nearly everything he needs to survive, beginning with his mother’s jar of money, which is immediately stolen from him while he sleeps, but not before he loses his virginity to who we later discover was Angel.

The next people he encounters are hapless white bootleggers. Regrettably, there is little tension built around Jonah’s fate, because almost as quickly as they arrive, the men tie Jonah to a tree and assume someone else will deal with him. Several chapters later, Jonah has traveled as far as Winchester, Virginia, and when he’s captured and jailed, his drunken, white jailmate is too filled with remorse at his own reckless behavior to report Jonah, who’s managed to escape his cell and is digging a tunnel under the wall. As soon as the white drunkard leaves—without saying a word—Angel, who has traveled by train with money she made in a brothel, somehow finds Jonah mid-dig and helps him escape.

We’re never left to linger in the moments of despair or hopelessness before a solution is conveniently presented and immediately successful. The narrators then talk us through the emotions, softening the blow of the hardships, and therefore exposing the fiction.

Morgan’s Chasing the North Star is like a beautifully shot-film that covers difficult themes, yet renders the drama perhaps a tad too innocently. Morgan seems to aim somewhere between the brutal 12 Years a Slave and the lighter YA novel Elijah of Buxton—another tale of a Canadian freetown, but this novel too often pulls its punches on the subject of slavery and doesn’t quite make the impact it could.