Selected by Randall Mann as the winner of the 2020-21 Jake Adam York Poetry Prize, Brian Tierney’s debut collection, Rise and Float, is nothing short of exquisite. Laid bare in these pages is a map of holes that reveal pain and death, as the question of whether or not to continue on in the face of suffering is illuminated. Tierney serves as a sort of backwards prophet of dark visions inviting us to experience past and present realities of illness and grief. We witness not just his memories, but also those that he has borrowed from others: “I am only telling you what I couldn’t have seen,” he reminds us in “Fixing a Hole”. Don’t be fooled by this volume’s slim size (yes, even for a book of poetry, it appears meager in its 80 pages): these poems are intimate and unyielding. Rise and Float is rife with the ghosts of Tierney’s experiences, ancestors, and friends—those that are gone but are still very present in the author’s mind and, now, on the page.

Because of Tierney’s consistent eloquence and penchant for smart, compelling rhythm, reading Rise and Float is a fluid, albeit dark, journey, perhaps not unlike what it feels like to travel through a wormhole or some strange dream:

“You’re imagining It already
as something else: a citadel in a citadel
town. Or a town, maybe
your town, a city, maybe this city
street the journey will meet you at,”

In the first of five unnamed sections, Tierney describes an excursion taken with a friend to try and find his great-aunt Evelyn’s “cell” in what is now an abandoned psychiatric hospital. This is a visceral experience of devastation, with all of the senses engaged: Evelyn’s laugh, the spine dissolving and, behind a crude electroshock contraption, “rusting holes. Holes where holes are not supposed to be”. We later see Evelyn reappear in “Fixing a Hole,” alongside her younger brother who was also subjected to electroshock therapy. We meet multiple friends who committed suicide, witness the speaker’s father as he is dying of cancer, and watch the speaker’s mother as she kneels and prays.

In addition to exploring a lineage of mental illness and tragedy, this collection examines in graphic detail Tierney’s experiences with migraines and bulimia. Just as the five sections in this book are not demarcated or divided by subject material, there is no one section devoted to the poems involving bulimia, another devoted to migraines, yet another to depression—instead these poems exist in consonance with one another. Tierney doesn’t draw clear distinctions between physical or emotional afflictions, or what is memory and what is present reality, which makes this such a refreshing collection. We tend to overcomplicate things, asking for proof, examining criteria for a diagnosis, doubting people’s experience of reality. Perhaps, Tierney seems to suggest, pain is pain, and the question of whether to continue on in the face of suffering is universal, though lived out in different ways. If you venture deep enough into these poems, intellectually and emotionally, you will see that everything Tierney discusses is just another facet of the same conundrum:

“…One great-aunt from
Yonkers put it this way: a sort of snow drifting nighttime trenches.
My brother tells me: I keep having this nightmare, a migraine light
beating off a plate, you know—a bright wall of water, sometimes
crystalline, obscuring a cave.”

While Tierney catalogs a lineage of pain, he does so with delicacy and finesse. Scenes of death and loss are not bereft of color and life. In the opening poem “Migraine”, Tierney’s dying father leaves a “fingertip print smeared on the dash, / as though someone had crushed a clover mite.” Halfway through the collection, we visit “…St. / Mary’s graveyard, where every family member is or will be buried” where the speaker imagines:

“…all the conifers swaying over Tricia there, and my father
too, and my great-grandfather Paddy Joseph, who bragged of his
hat trick of quasi-nervous breakdowns”

Tierney exhibits tremendous care for both his tragic subjects and his craft as he blends the past with the present. One particular and indelible moment of tenderness is in “Whatever Won’t Rise Becomes The Night”, where the speaker recalls being in college and finding a friend dead, hanging, “Her blue robe shed to the floor like the queenly pelt / of a great blue bear.”

I know what it means to question how long one wants to, is able to, endure the tragedies that come with life. I have watched family members and friends struggle to want to live, and I am not unfamiliar with the loss of someone dear to suicide. Other readers will likely be familiar with the same issues of grief and loss whether or not they are in the same form as Tierney’s narratives. Whatever your narrative may be, these poems recognize the complexities of human emotion.

Rise and Float is not a hopeful book, as its title might suggest. Tierney doesn’t offer up some perfect prayer or a balm for the aches of living. In “All Stars Are Lights, Not All Lights Are Stars,” he admits:

“I see heaven
is not a place, it’s a concept for pain, a pattern of snow
on municipal metal stairs I’m ascending now,
leading nowhere I know but a good place to lie
down. And I hope I roll off. And make a seraph where I fall.”

Still, we might be grateful for the way that Tierney so eloquently mapped out strains of suffering in this collection. We can, too, take solace in the final poem of the collection, named after a song by Fr. John Misty: “You’re the One I Wanna Watch the Last Ships Go Down With” While this piece is no anthem of hope, it’s a monument to the strength and will to live that can be derived from loving community:

“…I know now,
in fact, we don’t have to be brave,
not to survive a night
like any we’ve looked on
together…

Forgive me, again, that I write you an elegy
where a love poem should be.”

Reading Rise and Float, I can’t help but think of Tierney’s ancestry—not only those genetic predecessors but those literary figures who came before and left an impression as sure as DNA. These poems pay homage to a canon of (primarily white male) poets in their titles, borrowed lines, and original content (“Tied Islands” declares “The corpse of Frost / is under my heel.” Just as these men gave validation, even beauty, to the afflictions experienced by their generation, Brian Tierney is reestablishing today the reality of shared journeys of grief, suffering, and survival. It has been a long time since I’ve read a debut collection that stirred me as deeply as Rise and Float, and I highly anticipate more poems of beauty and truth from this poet. 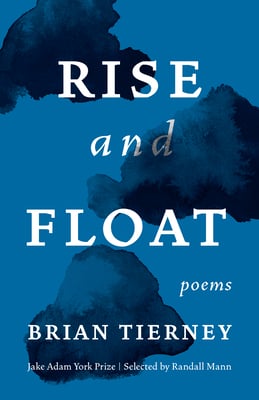