Julia Ridley Smith’s debut memoir in essays, The Sum of Trifles, shapes a compassionate narrative from the objects her antiques dealer parents left behind after they died six months apart in 2011 and 2012. Each essay in the debut book recounts her personal and family history through objects like her father’s enormous mid-century stereo that piped out jazz most nights and her mother’s Japanese screen which depicted the Tale of Genji, famously written by a woman. These objects frame larger questions of what it means to reckon with the things one’s parents leave behind after they die, especially as they relate to inheritance and identity. Smith’s stories and essays have appeared in Alaska Quarterly Review, Ecotone, Electric Literature, New England Review, The Southern Review, and elsewhere. Her essay “Legs” was recognized as notable in Best American Essays 2019. She is currently the 2021–22 Kenan Visiting Writer at UNC Chapel Hill.

I spoke with Smith, who was at home in Greensboro, North Carolina, on the phone.

This interview has been edited and condensed for clarity.

When I need help deciding if a writing project is worth moving forward on, I refer to Audre Lorde’s self-questionnaire, especially the question “what is the worst that could happen to me if I tell the truth?”

Did you feel the need to wait until after your parents died to examine your relationship with them and your childhood?

When my parents died, the worst thing that could have happened did happen. I mean, my mother dying was the thing I was most afraid of back then. It was just such a massive loss because I was so close to her. And because there was so much in our relationship that was about language, about talking.  She and all her extended family made telling stories look like the most fun you could have. Listening to them was part of what made me want to be a writer.

So, telling the truth in the book was never going to be as bad as losing her.

When she died, I was free to tell more things. In the book I recount how she joked that if she ever saw herself in my writing, she was going to sue me. And yet at the same time, she was always calling me up saying, “I heard this great story today. You should get a note card, and write it down in case you can use it.” She was always giving me material, but at the same time, sort of jokingly, not jokingly, telling me that she should not be my material.

You want to speak well of the dead, right? Because they can’t defend themselves. One of the big things in my family is loyalty. We all try to be there for each other when one of us needs something. So I think I put off writing about my family until I felt I could be loyal and still critique them at the same time.

The writing is observational, kind of journalistic, but the intimacy comes through. I feel the critique was more about the objects they left behind.

Dealing antiques and thinking about the decorative arts and material culture was so central to my family’s work and way of being. I guess that’s where the critique element came in as I wrote this book about cleaning out my parents’ house. I was questioning the meanings of all these things they’d collected—furniture, artwork, books, papers, all of it. I kept wondering why they’d kept so much stuff, what it was all for. In the end, I guess my wanting to live with fewer objects and wanting to put less stock in those objects felt a little disloyal to the family way of doing things. Because it definitely diverged from what I’d been taught growing up.

A common thread through many of the essays in the book is the pressure and the repeated message from your family, and the larger North Carolina culture, that they and, by association, you, were “nice people”. You write about “the implication that ‘nice’ people are those who have already made it’ in the world, preferably generations before and that the things they own—their inherited furniture and old silver and family portraits—are the proof.”

My whole adult life, I’ve always worked to earn a living, but whenever possible, I’ve chosen to do what would give me more time over a job that would give me more money. For many years, I was a freelance copy editor of academic books. I thought if I wasn’t in a nine-to-five job, then I could figure out how to work my schedule so I’d have time for writing. I didn’t mind driving an old car or wearing old clothes, because the time was so much more important to me. I acknowledge there’s privilege tied up in my being able to choose a less stable job. I could do it with less sense of precarity because I knew I had a safety net.

As far as what success looks like to me, it doesn’t have to do with material things. I guess that’s some of what I’m trying to tease apart in the book. To me, success looks like being able to do something that’s personally fulfilling and have that overlap with contributing something positive to your bigger community, so that everything you do is not all just about yourself. For me, it’s meant developing my writing practice over the years, and being able to devote some time and energy to that, along with becoming a teacher and volunteering, whether that was at my kid’s school, or the Weatherspoon Art Museum, or with Greensboro Bound.

There’s only so many hours in the day. The greatest freedom is being able to decide how I want to spend my time.

Your book weaves in many additional texts that offer context and depth to your writing. These texts support what is at the heart of the book, that stories live on long after objects fade and family members die. In the Notes section, you list “books I found helpful as I mourned.” Are there any others on your list of recommended books about grief?

Whenever I need to process something, I need to get a book about it. Roland Barthes’s Mourning Diary is made up of notes he wrote in the months, years, after his mother died. It’s so raw. After my mom died, that book was really helpful to me because it wasn’t giving any advice, it wasn’t trying to get me to move on. It was just somebody noting their grief, observing what it consisted of. And that to me felt like, okay, I understand what this is because I’m also a writer and observer. Let me just start by observing what’s happening.

As I got further along in my mourning, I read some of the books that are becoming modern grief classics, like H is for Hawk by Helen MacDonald. And I love the cartoonist Roz Chast’s Can’t We Talk About Something More Pleasant?

Overall, I’m drawn to stories that connect personal experience and family with bigger cultural ideas, with art and literature. That’s definitely the kind of nonfiction I gravitate to, and that’s the kind of book I wanted The Sum of Trifles to be. 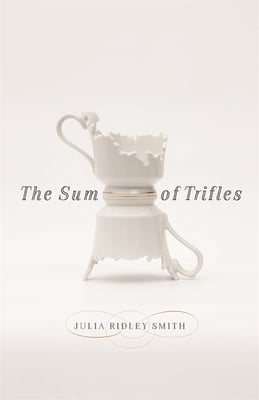 Jeannine Burgdorf is a writer in Chicago. Her fiction has been appeared in Signal House Edition, New Reader Magazine, Orange Quarterly, and the anthology Writer Shed Vol. 2. Her nonfiction has appeared in the Los Angeles Review of Books, Quail Bell Magazine and INELDA.