Loss and Legacy in “A Farewell to Gabo and Mercedes”

In his latest release, MPH and Other Road Poems, Ed Roberson recounts a motorcycle trip across the United States with two friends in 1970. This journey is taken through the poet’s return to a recovered manuscript previously written in that time, analogous to his own life’s ongoing journey through the Americas’ extended geographies. In these poems, the American West works both as territory and resistant silence.

The narrative moves through place and self, navigating the blood just under the land—the “bloods of the hold…bloods of the field.” Roberson’s poems also extend the journey into what critic Chadwick Allen calls “trans-indigenous” space, an engagement with deep journeys taken within the Americas, points of migration, search, exile, and flight. These poems tour an American nowhere, although the poet does not follow a linear journey on this road. Instead, he sounds the horizon “at the far edge of circling the country.” Moving across deserts and cotton fields, Roberson’s travels explore an axis of not only east/west, but are fully cognizant of how that journey also reflects an American south/north axis. Travels that are not merely on the road, but against it—both within and outside time.

These poems chart the small movements of time that Roberson experiences bodily in his travels as well as through the terrain passing under him as the bike’s wheels turn. The rider’s body and the curve that it enters and the writer at the desk “kicking out paper like miles.” The poet’s return to this journey shakes loose the play between eye, memory, and land. Roberson plays with the poetic line there by exploring brief perceptions, then lengthening them as the journey propels him beyond the map’s edge. He gathers visual detail—scorpions, ghosts, and even another passing version of himself from the back of the bike. He notes “Objects in the Rearview Mirror”:

the beds   the grave

In such moments, his own body becomes a part of that picture. His return to this manuscript brings Roberson himself back into this deep history of American journeys. The road lengthens into place:

“clouds the broken white line down the center

of the sky the sky is

piece off with the road the coming apart,

the road’s sides that leave the there ahead

as an empty spot      when they reach us are far apart

place here is made by direction…

place where reaching is a return to

someplace i was born got hold of

by right now and move from where i was.

place where i am now nowhere”

This book is also a collection of signs gathered from the nation itself, small gestures or insinuations that “re-place” the writer. There’s the rifle stocked within a pickup’s gun rack and an old woman’s silent negotiation in selling a painted and feather-adorned deer’s skull. The Jolly Green Giant statue hulks just off the highway in Blue Earth, Minnesota. The poems hearken to violence with “the road signs barely readable for bullet holes.” Signs pass here as haints in a deep American mythos, such as in “Road Ikon,” where an imagined creature rises up with a semi’s appearance. Occasionally, gestures recognize Roberson’s passage, as in the acknowledgments of other Black men passed along a street in Pittsburgh. Still others are more threatening: the glance of a motorcycle gang member who rides up beside the travelers, which leads to this exchange:

“where you think you going—

Some of these signs are also made visual in the text itself with Roberson’s own sketches of western landscapes. These sketches work as both borders between sections of the book as well as points of transit along the poems’ more sustained road. The reader sees through Roberson’s own eye, moving between elevation and highway. This west, flattened to the page, restores a sense of verticality to the poet’s horizon, a glimpse of deep time from the back of the bike.

In his book Signs of the Americas, poet and critic Edgar Garcia reinforces how a visual sign works poetically, echoing in deep time and space. Signs as poems can reflect the inherent rhythms within that space. Disordering time itself, signs and poems can, as Garcia writes, “inflect the time horizons of past, present perfect, present, future, and future anterior.” These visual cues also echo throughout MPH and Other Road Poems. Roberson recognizes this negotiation within time’s journey, the “signs” of himself (and the country) between the years of the poems’ origins and their published shape (a wonderful accomplishment by editor Andrew Peart). Roberson explores visual moments of seeing and being seen, his body set against the wide landscapes of the West and American time. He writes in the introduction, “Decades old, these words sounded like me, had my thoughts, and mostly had my way of seeing. This was my work then as now.  It needed an old-man haircut, but it was nonetheless my head.” The poems carry Roberson in time and place:

i had been to heaven in the a.m.e. church

i had been to the bed of the sea…

but i had never been here”

In this sense, MPH and Other Road Poems works as a reconstructed manuscript, one made of recovered fragments and the memoried sinews that the poet brings to poetry.  As he reconstitutes these poems from the past, Roberson rebuilds a version of himself in and through time. The project becomes a way of “letting my younger and older selves speak to one another. Now when I read the MPH you hold in your hands, the road and what happened there all those years ago call out to me across the expanse of a lifetime.” Though is it “what happened” or “what happened?”  Echoing Walt Whitman, what is it to hold all that time “in hand?” How can it be contained or sounded within the narrative of “road” or “expanse?”  Roberson looks back to that self, whomever he was, whatever the country has become or remained.

Within these transl(oc)ations across time, Roberson sets out with the urgency “of isolation in [one’s] own country…of what to do with what you bring back.” He plumbs a personal geography, the very human map of which the country is made in the end. He asks:

“what one of you directions did i come from…

the map on my back

A journey into poetic origins, Roberson’s travels chart their own space against “the road” in American writing, a space that has regularly been invoked to offer reinvention’s promise and the freedom of distance. MPH and Other Road Poems redraws the territories and rivers crossed, history’s momentum in years passed. Across that expanse, one feels how that road is emptied and is itself emptying. 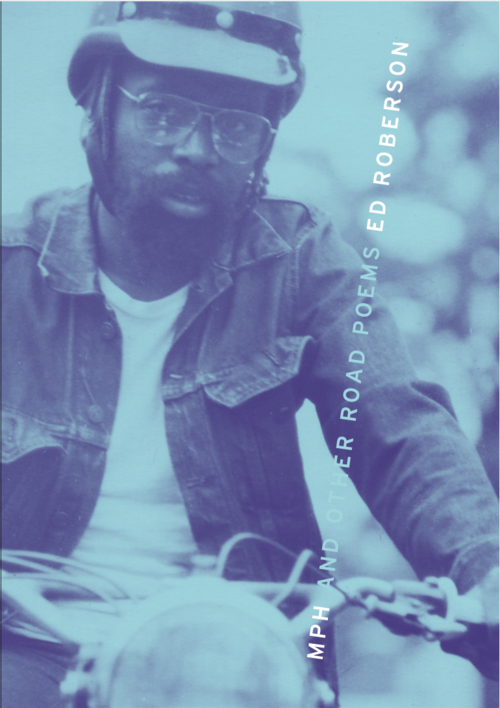 Garin Cycholl’s 2022 novel, Rx, is a play on The Confidence-Man, a man practicing medicine without a license in a Dis-united States. His recent work has appeared in The Typescript, ACM, and The Dead Mule of Southern Literature.