Accessible Space in “What Kind of Woman”

C.J. Cooke’s new novel, The Nesting, ticks all the boxes of a satisfying thriller, but it’s more than just a safe bet for a good read on a dark and stormy night. Cooke’s thought-provoking depiction of the sinister side of motherhood and Mother Nature adds depth to the book’s fast-paced, gripping plot and amplifies its eerie atmosphere.

In The Nesting, Lexi, a young woman recovering from a recent suicide attempt, finds herself at loose ends when her boyfriend abruptly breaks up with her. Now both homeless and jobless, she’s on a train to nowhere in particular when she overhears a woman discussing a job prospect: a nanny position for a family living in Norway. When it becomes clear that the woman is not interested in the position, Lexi sneaks a look at her computer and snaps a picture of the job advertisement and the woman’s resume, which Lexi uses to apply to the job.

The ruse is successful, and Lexi is hired as a nanny for architect Tom Faraday, who has recently lost his wife Aurelia to suicide and moved his two young daughters to Norway to finish the summer home he began building there before Aurelia died.

When Lexi arrives in Norway, she warms to the two girls immediately, but she’s initially overwhelmed with the difficulty of taking care of a toddler and a traumatized 6-year-old. Cooke’s realistic depiction of the exhausting work of childcare is amplified by flashbacks from Aurelia’s perspective. These flashbacks show the all-consuming challenges of motherhood in compelling detail: painful breastfeeding, mind-warping sleep deprivation, constant worry, and a sense of alienation. In fact, the scenes of Aurelia struggling desperately to meet the needs of her children despite her bone-weary body and troubled mind are some of the book’s scariest.

But The Nesting is not pure psychodrama. In fact, Cooke is careful to separate the mental challenges of motherhood from the troubles that beset the Faraday family and home. The possibility of postpartum depression is set aside early on, and Aurelia herself claims that “it is only when Tom cut down some ancient trees to clear a better view for the new house that the darkness seeped in to her.”

Tom is an environmentalist – he’s a vegan, his daughter’s name is Gaia, and he is determined to make the house he is building the pinnacle of green architecture – but his actions often indicate otherwise. Besides clearing the trees, he also diverts the course of a river that is interfering with his building plan, despite having been warned of the ecological harm that could result.

After Tom successfully alters the river’s course, he reaches down to take a drink and finds that he cannot retract his hand from the water. It is “clasped, held tight….gripped by the water itself from the wrist down.” As he struggles to free himself, bewildered and terrified, Tom sees the figure of a woman standing behind him, watching.

Ominous signs appear: ravens congregate on the roof, a moose attacks the workers on the building site, the river escapes its new confines and reverts to its old path, flooding the foundations of the new building. But the warnings are not confined to the great outdoors. The mysterious woman begins to appear inside the family home, first to Aurelia, and then later to Lexi and Gaia. Cooke embodies the entity with a menacing energy, making her appearances unpredictable and genuinely creepy. Though Gaia calls her the Sad Lady, the Norweigan housekeeper speculates that it’s a nøkken, or Norweigan water spirit.

As Tom’s building project is rocked by catastrophe after catastrophe, Lexi is left to guard her secret identity, protect the children, and wonder what really happened to Aurelia. Besides the terrifying presence of the Sad Lady, Lexi has her suspicions about the roles that other members of the household may have played in Aurelia’s death, including Tom himself.

Does the true reason for Aurelia’s death lie in the supernatural, or among the fractured human relationships of those around her? Suspicion waxes and wanes and waxes again around each character, even while the natural world lurks and threatens.

Lexi serves as a loveable guide through this tangled web. Despite the constant burden of concealing her true past, she is immune to the angst that afflicts the others in the house, instead soldiering on with a sort of harried optimism. Her chatty, casual narration, offbeat observations, and impulsive decisions create an affable kind of goofiness that juxtaposes pleasantly — if unexpectedly — with the gothic darkness all around her. She’s a bit of a mess, but her earnest commitment to the children and her steady, painful progress on the road to her own mental health recovery make it easy to root for her. The character of Gaia is similarly well-drawn, balancing the grief and longing she feels for her lost mother with a hopeful innocence and a child’s keen focus on the details of everyday life.

For readers looking for a high creep factor, The Nesting delivers. Cooke uses the dark undercurrents of Norweigan folktales to create a deeply unsettling overlay for the more traditional atmospheric elements of brooding cliffs and dark forests. While a few loose ends of the story are left untied, the book’s kinetic climax surprises and satisfies, making The Nesting a captivating bedside thriller for chilly autumn nights. 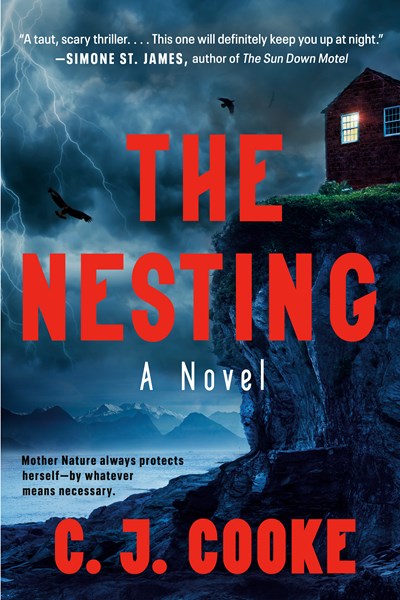