Feroz Rather’s story collection The Night of Broken Glass kicks off with a presumed-dead prisoner confronting the police inspector who has repeatedly tortured him in the distant past. The inspector, struck by terminal lung cancer, is on his deathbed. The setting is occupied Kashmir, where the longstanding fight for independence by separatists stokes waves of public violence and insurrection. With this early reversal of fortunes, the prisoner has complete power, an easy opportunity to exact revenge, but Rather’s interlinked collection can’t be reduced to such swift actions and reactions. In this baker’s dozen, the author reveals complex cycles of trauma, fraught social relationships, and unexpected compassion amidst constant turmoil.

I spoke with Feroz at a pizza bar neighboring Florida State University’s main campus, where we both serve as interviews editors at The Southeast Review, and later by email. We discussed his experiences growing up in Kashmir, the kinds of spaces where short stories and novels can blur, and how violence alters narrative structure. 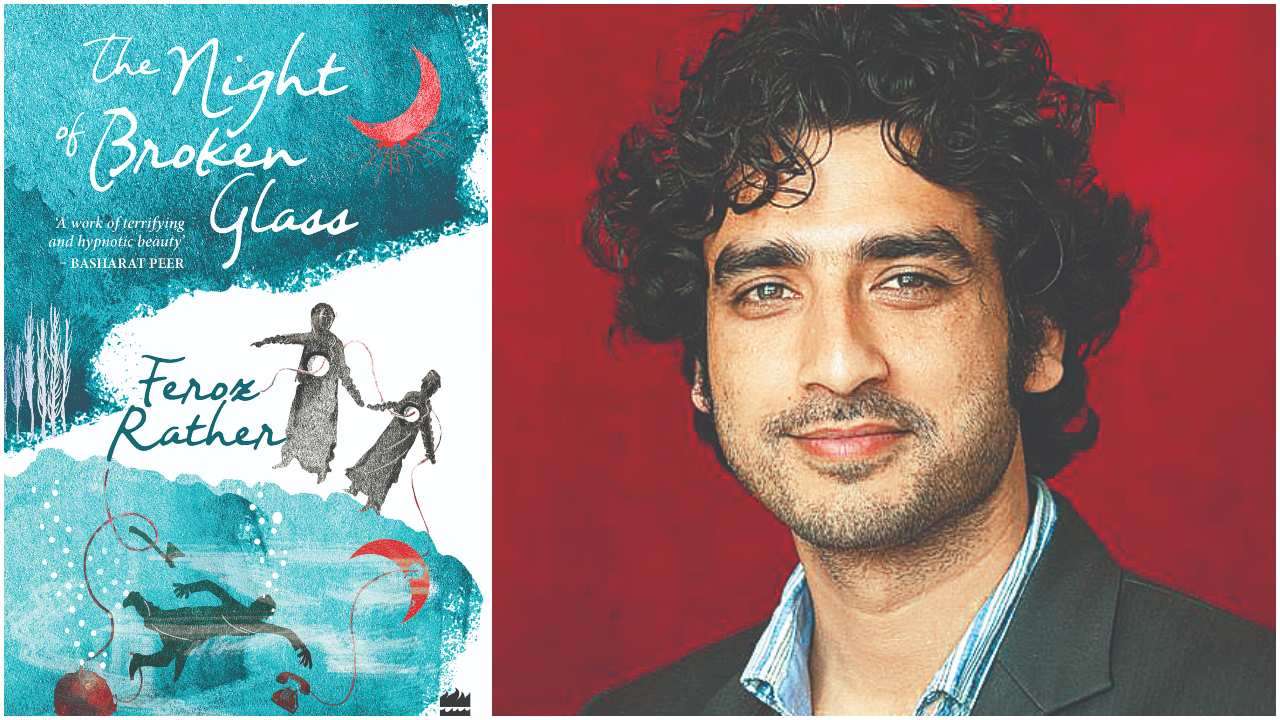 These 13 short stories are interlinked and cohesive, but each stands distinct, and I was curious about how you thought about the chronology of the collection. How did you think about each story as its own entity and part of a whole?

I did not think about creating a chronology at all. It was a spontaneous progression, with characters growing out of characters, stories out of stories, scenes out of scenes. That was the fun part, but it also got very scary, especially with the last story from which the book derives its title. I felt I was going down a cold precipice into a very dark place. The stories are set in contemporary Kashmir, and I attempted to write them in a way that they stand individually as well as chapters of the novel. If we were to alter the order in which they are given in The Night of Broken Glass, that would change the response of the reader in some way but not very significantly. The over-all impression of life in Kashmir as it is lived under the suffocating military siege will come across as it is: bloodied and fissured.

What challenges did you face in writing fiction about events that are both current and have complex historical circumstances? I’m wondering about how you considered historical accuracy within the breadth of the collection.

Writing this book taught me something very fundamental about the process of writing. In fiction, your fidelity is towards the characters. One has to evoke what the characters feel rather than be hinged to the (historical) event that caused or initiated those feelings. It is about amassing human details in the contours of the character’s being rather than chronicling history. There are writers who see their characters’ lives, to put it somewhat simplistically, determined by historical events. Some others see their characters’ trajectory or movement through the novel as embodiment of a certain historical force. I grappled with history, too, the countless crossfires and many massacres that happened in Kashmir. But my challenge was not to be swayed with the brutality of the occupation as it unfolds in sporadic, violent events with tremendous force. I often felt that the military violence was so excessive, it’d disrupt the traditional or linear ways of telling a story. My insistence, however, to persevere and write till the end gave me a lot of psychic anxiety. The narration became jagged and uneven, and some endings became abrupt. But if that is reflective of what violence has done to life in Kashmir, how helpless and uncertain and vulnerable we feel in place and time, then let it be.

As a Kashmiri writer, do you feel a sense of obligation, perhaps an unfair one, to explain what’s happening in the region? Did you feel a certain demand to talk about your lived experience, even if through fiction?

Life has the ability to cripple art. The mounting weight of the dead bodies often pulls me down. As Washington Post reported on December 23, 2018, last year has been a rather deadly year in which 238 rebels fighting for Kashmir’s independence and 86 soldiers enforcing Indian rule were killed. Now this is how it happens: a few rebels are holed up in a house and an entire village comes out to save them from the armed soldiers getting ready to blow the house up. Civilians who are chanting slogans of freedom and throwing stones at the soldiers are fired at and blinded and killed. You might say: But that is madness. Yes, that is the madness of the war in Kashmir.

Over the last thirty years, I have seen and heard and read about so many Kashmiris getting killed and injured and tortured and blinded that the spectacles of violence have become mundane. At 35, I feel quite old when it comes to the magnitude of the violence I have had to witness. I am numbed and blunted by the violence. Those who have the luxury of distance might think fiction gives one immunity from the immediacy of history but that has not been true for me. The process of transmutation is tormenting, like witnessing the relentless killings of fellow Kashmiris itself. The challenge, however, is once one has committed to the form of the novel, however chaotic in its conception, however episodic in its delivery, one wants to realize the book despite the instability brought about by the violence.

Even with that instability, I found these stories have a complex emotional range. Certainly these stories contain vivid moments of extreme violence, but there are also moments of intimacy and compassion, both by the characters and in the prose. How did you think about emotional balance and register in these stories?

Thank you, Aram. That is affirming because the violence is so pervasive in its nature yet has not been able to obliterate life in Kashmir completely. The beauty of the novel is that it renders the life of an individual or a society comprehensively by recreating minute details, and for me the most beautiful moments are where by the eloquence of the voice the mundane is ruptured. In my book, I will place the moments of compassion there. One such moment is in “The Souvenir,” when many years later a son finds out that his father would go for long walks through the city to collect the bullet shells so that the son would not have to see the shells when he went out to play. We have seen a lot in Kashmir but that is how I would qualify the feeling I have for my father to whom this book is dedicated.

The theme of violence throughout this book is rooted in the daily realities of Kashmir. I’d say your fiction exposes the violent behaviors of individuals through various lenses, but how are you also examining the larger social, cultural, and political implications these moments seek to reveal?

This is a very important question. I think in our times anthropology has flourished as a discipline because what an anthropologist does, she delves into the specific details of an individual and only once she has gained deep knowledge of her subject does she want to fit that knowledge into a broader theoretical framework. I like this because fiction works similarly. One does not write towards a theme: one just writes about little moments in peoples’ lives. The broader themes emerge or are imposed from outside to make meaning of the narrative that is a detailed rendering of a human being’s life.

I am not merely interested in writing about the military violence in Kashmir. There are other kinds of violence too. The violence of the caste that is both political and social in nature. The violence against the women in my society where men do not question the groping of girls in over-crowded buses. The violence that imams (mostly upper caste) wreak every Friday by using their rhetoric in frightening young boys that Allah will burn them in hell. I remember when I was at school in a village in the south of Kashmir, our teachers would often beat us with willow switches if we did not show up in the mosque during the recess period. I am often amazed by the force with which I remember those moments of misery and humiliation. Even if I try to muffle my past I know such moments will eventually resurface.

Who are your influences? What writers or artists were integral to The Night of Broken Glass?

My influences are very steady but here I want to share with you my experience of reading Adrienne Riche’s poem, “Rusted Legacy,” that was crucial to my conception of the longest story in the novel, “The Pheran.”

Imagine a city partitioned       divorced from its hills

where temples and telescopes used to probe stormy

a city brailing through fog

I finger the glass beads I strung and wore

under the pines while the arrests were going on…

I read the poem while I was on a bus in Washington DC. I was startled how the poem read to me like a novel about contemporary Srinagar, the capital city of Kashmir. It is a poem of a daughter returning to a city after many years. One does not want to give away too many things but the poem has the complete architecture of a novel. To me, it talks about the blinding of the demonstrators, the scarred landscape of the city partition by the artificial walls, the breaking of young boys’ bodies inside the torture chambers. I am truly grateful to Adrienne Rich for writing such a compelling and beautiful poem.

I know you’re starting to work on a novel now. Would you mind telling us a little bit about it?

I am beginning to work on a new novel set in California and Kashmir. I want to make sense of what I felt about living in the Central Valley while I lived in Srinagar and vice versa.

Feroz Rather is currently a doctoral student of Creative Writing at Florida State University and his work has appeared in The Millions, The Rumpus, The Southeast Review, Caravan, Warscapes, Berfrois, and Himal. His most recent essay, ‘Poet in Srinagar’, appeared in the anthology Mad Heart, Be Brave: On the Poetry of Agha Shahid Ali. The Night of Broken Glass is his first book.