It isn’t long before an elegiac note sounds in Deborah Eisenberg’s latest book of short fiction, Your Duck Is My Duck. In the first story, the narrator begins:

Way back—oh, not all that long ago, actually, just a couple of years, but back before I’d gotten a glimpse of the gears and levers and pulleys that dredge the future up from the earth’s core to its surface—I was going to a lot of parties.

That retrospection, tinged with rueful wisdom and more than a little melancholy, is central to the collection, Eisenberg’s first in twelve years and her fifth since Transactions in a Foreign Currency heralded her arrival in 1986.

Eisenberg’s early stories often focused on a certain kind of lost girl—bright but slightly overwhelmed, a little too pliable to the people around her—trying to find a place for herself in a rudely inhospitable world. When Eisenberg was working her comic mode, the travails of these women rose to the level of modern-day screwball comedy: thinking of 1987’s “A Cautionary Tale,” a classic account of Manhattan bootstrapping, I still laugh at how the heroine indignantly admits to herself, at the low point of an impossible waitressing gig, that “This was not how she had imagined her adulthood.”

Thirty-some years later, Eisenberg’s protagonists are likely to be women of a certain age, members, however tenuously, of the creative class, and still city dwellers acutely attuned to the mores of a world that’s passing them by. (“No one met people in person any longer—you couldn’t hear what they were saying” is the most concise summary of New York restaurant culture I may ever need to read.) Most saliently, these modern selves find themselves unexpectedly alone (breakups are a recurring motif) and only too aware of the shadows lengthening all around them.

In one new story, “Cross Off and Move On,” a narrator reckoning with the death of her last surviving relative thinks, “Yes, off they go, my old allies, sailing right through the radiant shield at the edge of the universe, blending into darkness.” In “Recalculating,” a former dancer mourning a long-ago lover feels “brittleness fretting her bones, youth streaming from her in galaxies of sparkly molecules.”

These women have even more to contend with than aging and loss. Because they’re Deborah Eisenberg characters, they are also coping with what it feels like to be alive, as educated, alert citizens of a Western society, in the early years of the twenty-first century, when old-fashioned everyday anxieties have given way to something like dread. As in her previous collection, Twilight of the Superheroes (2006), Eisenberg is able to dramatize how the diabolical crawl that appeared on the bottom of TV news screens in the days after 9/11 found a counterpart inside people’s heads—and just what a toll our new normal of permanent crisis is taking on them. In the title story, a painter says to the doctor who’s prescribing her sleeping pills:

“It’s beginning to look like a photo finish—me first, or the world. It’s not so hard to figure out why I’m not sleeping. What I can’t figure out is why everybody else is sleeping.”

(This is from a story, by the way, that was originally published in 2013.)

The painter in “Your Duck Is My Duck” later meets an avant-garde puppeteer whose magnum opus, The Hand That Feeds You, is such a blunt allegory of life under terminal capitalism that it leaves the audience at its premiere, a select handful of one-percenters, momentarily speechless. The scene is bleakly funny in a way that feels just right for our present moment. But the story’s coda fulfills the puppet show’s preemptive title and then some, acknowledging how the two artists’ reliance on those one-percenters for patronage implicates them in the same system—a subtle reshuffling of our assumptions that’s characteristic of Eisenberg’s method throughout these stories.

In real life, the charge “first-world problems” became a reductive cliché almost overnight, so it’s especially gratifying in this book to see the idea explored humanely and from so many angles. Beings of conscience, Eisenberg’s characters are haunted by a suspicion that their relatively well-off lives might somehow be linked to all the hypocrisies, inequities, and worse that are the stuff of daily headlines—the stuff of our malaise, in other words. (As a character in her story “Twilight of the Superheroes” asked himself back in 2004, “Then again, how far away does something have to be before you have the right to not really know about it?”)

The theme gets its most expansive treatment in the novella “Merge,” which traces the shifting fortunes of Keith, a slippery scion of privilege headed for rock bottom after his domineering father, CEO of a rapacious multinational, kicks him out of their home. Eisenberg has long specialized in a comedy of aggrievement, and at first Keith’s indignation, his perplexity at having to fathom how ordinary people go about their lives, yield some of the funniest scenes in this book. When Celeste, an NGO worker who is also a potential romantic interest, tells him she’s about to embark on fieldwork in Slovakia, he thinks: “Slovakia? That was what she meant by Europe?”

Celeste’s trip to Europe—and points beyond, in several senses—is the hinge on which the story turns; it leads to a widening of scope that puts Keith’s struggles in a stark new light. The fascination with multiple perspectives that distinguishes Eisenberg’s later stories comes into full effect in “Merge,” whose changing points of view ask us to consider, among other things, dramatically different definitions of what it might mean to be homeless, and why some people become victims while others, heedless or even undeserving, get to flourish.

That said, even after repeat readings I’m not sure how all of the story’s thematic elements, which grow to include mental illness and theories of language, cohere into a persuasive whole. At the same time, it’s evident that a late Eisenberg story isn’t interested in surrendering its meanings too easily. A case in point here is “The Third Tower,” the outlier in the collection: set in a world both like and unlike our own, it features a young woman receiving treatment for a psychological condition that scans a lot like unfettered creativity. Something other than naturalism, the story testifies to Eisenberg’s formal restlessness, the way she regularly tests the four walls and ceiling of short-story form.

No account of Your Duck Is My Duck is complete without a mention of how gracefully this writer, tagged earlier in her career as a quintessential urban sophisticate, renders the natural world. “Recalculating” includes a beautiful description of a hurricane descending on a Midwestern prairie, and “Your Duck Is My Duck” has this snapshot of a wildfire witnessed from a great height:

Accident had selected me to observe, in whatever way I could, the demonic, vengeful, helpless, ardent fires as they consumed the trees that had replaced the crops—to observe the moment when, at the heart of the conflagration, the trees that sustained it became phantoms, the fire’s memory.

It’s typical that these lyrical outbursts are prompted by natural disasters—appropriately for a collection that regularly glances over its shoulder at environmental collapse along with every other kind of decline.

How much needs to be said about a writer who has very little left to prove? Across four decades Deborah Eisenberg has steadily enlarged her vision while refining her art. Her writing adds to our collective store of wit, empathy, and intelligence. If you haven’t read her yet, by all means start with Your Duck Is My Duck, and then waste no time in getting your hands on her Collected Stories, the chunky 2010 trade paperback that gathers the rest of her singular body of work. 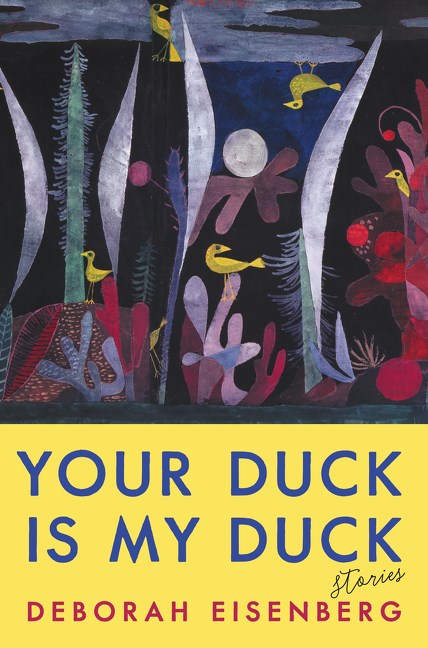 FICTION
Your Duck Is My Duck
By Deborah Eisenberg
Ecco
Published September 25, 2018

Deborah Eisenberg is a MacArthur Foundation Fellow and the award-winning author of four previous collections of stories: Transactions in a Foreign Currency (1986), Under the 82nd Airborne (1992), All Around Atlantis (1997), and Twilight of the Superheroes (2006). Her first two story collections were republished in one volume as The Stories (So Far) of Deborah Eisenberg (1997). All four volumes were reprinted in 2010 in The Collected Stories of Deborah Eisenberg (2010). She is a professor of writing at Columbia University.