This Saturday and Sunday (June 9-10, 2018), Chicago plays host to the largest outdoor literary festival in the Midwest, Printers Row Lit Fest. More than 100,000 people will flock to the historic Printer’s Row district (also known as Printing House Row) in the South Loop for a bookfair featuring more than 100 exhibitors. But there’s a lot more to see than just the books.

First of all, Printer’s Row is one of the most beautiful corners of Chicago, full of architectural monuments to the city’s history as the the largest publishing center in the United States at the turn of the century (yes…bigger than New York). And second, dozens of amazing poets and writers will be on-hand to talk, perform, and sign books.

Here are ten things you don’t want to miss: 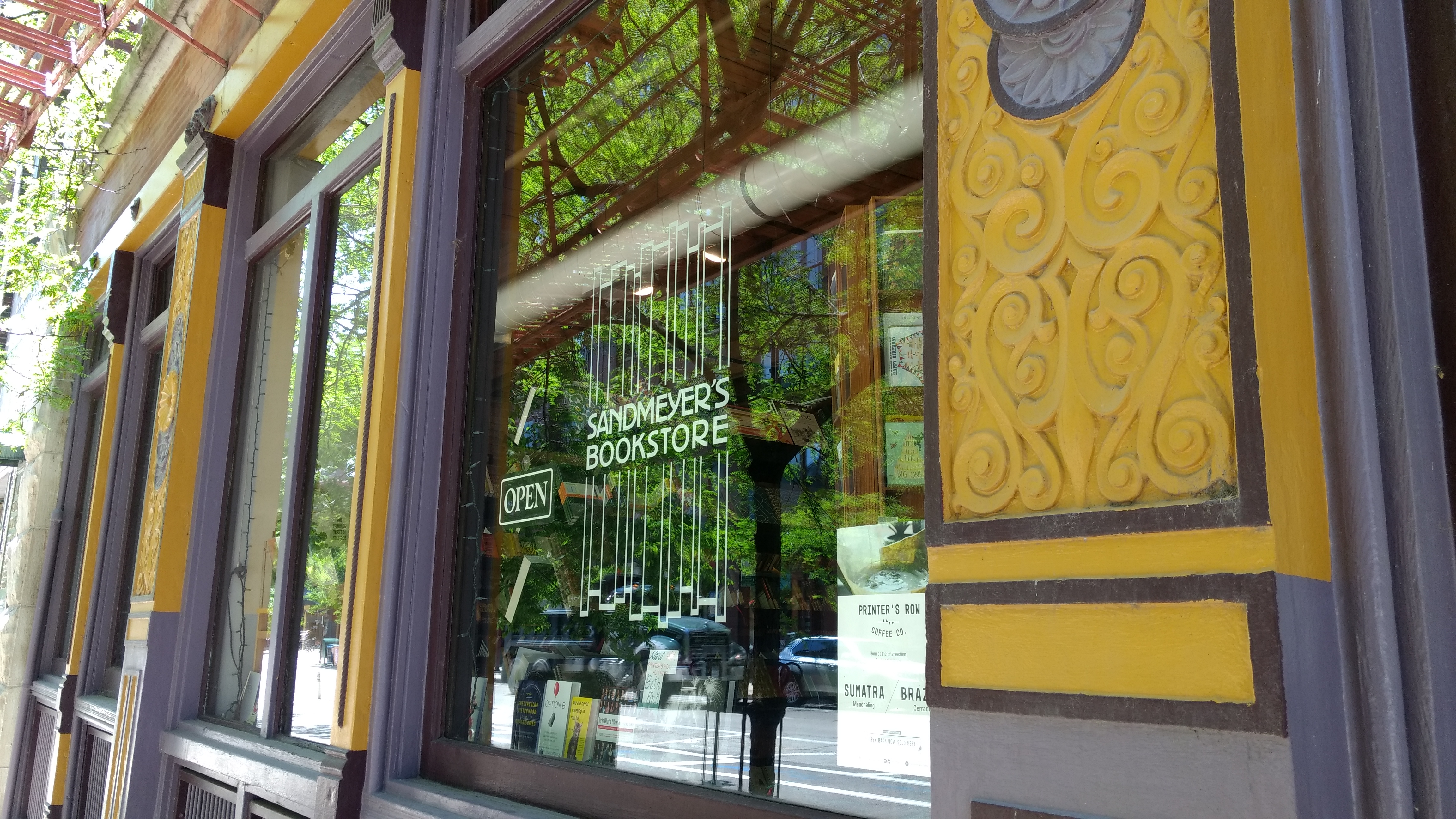 One of the oldest and most beautiful independent bookstores in the city, Sandmeyer’s keeps the Printers Row neighborhood literary, decades after the last printing press fled for the burbs. It’s still run by founders Ellen and Ulrich Sandmeyer, and it anchors one of the two gorgeous Franklin Buildings (see below). Of course, there will be thousands (millions?) of books on sale elsewhere at Printers Row. Here’s a full list of exhibitors.

The Chicago Review of Books will have a table right at the intersection of Polk and Dearborn, in the shadow of Dearborn Station (see #9 below). Stop by between 10am and 6pm both days to meet me and some of the other CHIRB / Arcturus editorial staff. (PSA: If you want to meet Isla, stop by on Saturday morning.) We’ll have exclusive early copies of The Cliff-Dwellers on hand (see #5).

Almost all of the panels are free. Here’s the full schedule, and here is my own personal must-see lineup: 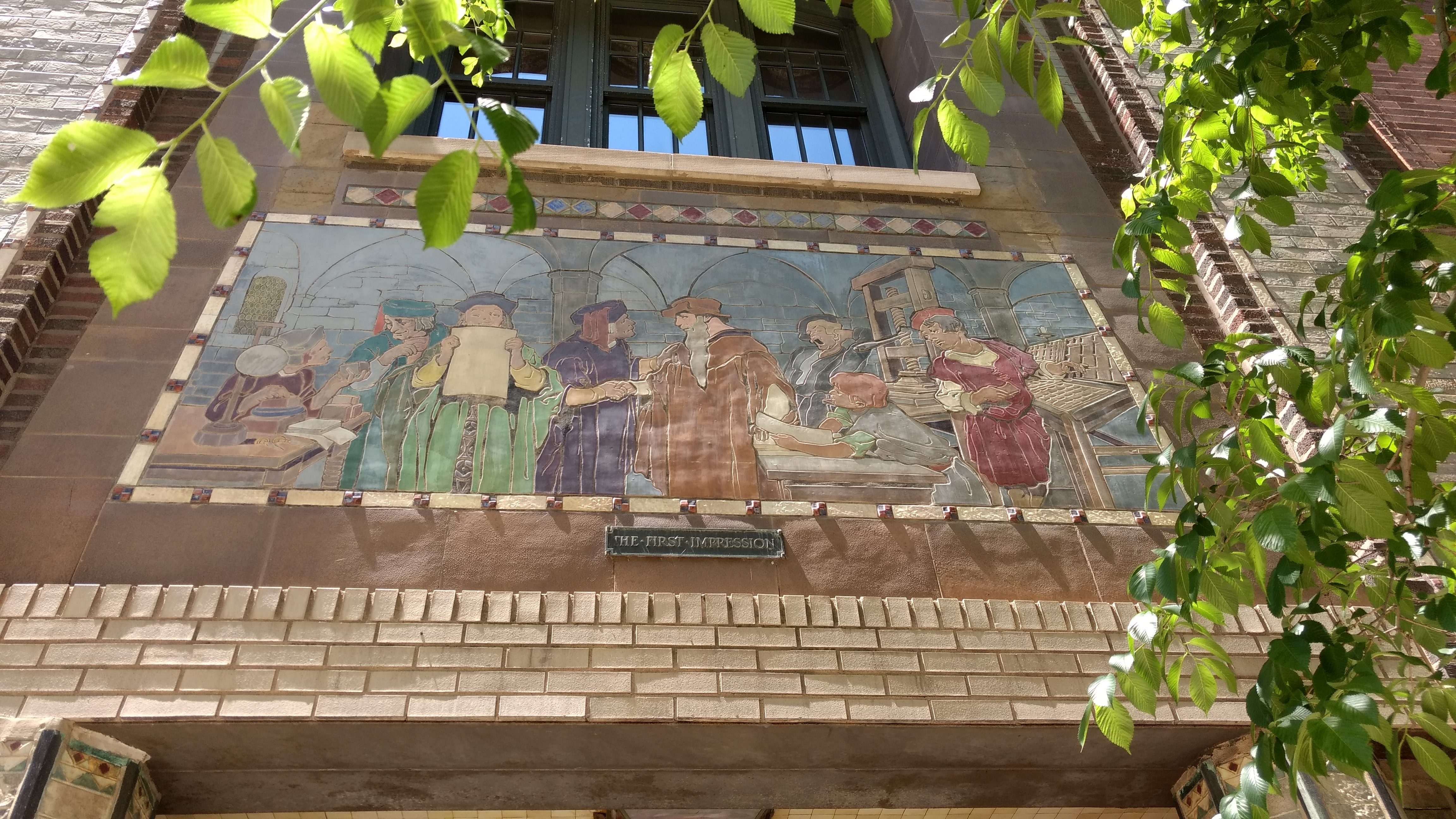 My favorite remnant of the original Printers Row is the 14-story “Chicago School” building at 720 South Dearborn, also called the “New” Franklin Building. Built in 1916 by the Franklin Printing Company, it’s covered with terra cotta murals and other architectural details that commemorate the history of bookmaking and the printing press (see the Gutenberg mural above). In the late ’80s, long after most printers had left the area, the Franklin Building was gutted and converted to loft space.

Right next door is the “Old” Franklin Building, built in 1886, which houses Sandmeyer’s Bookstore on the first floor. 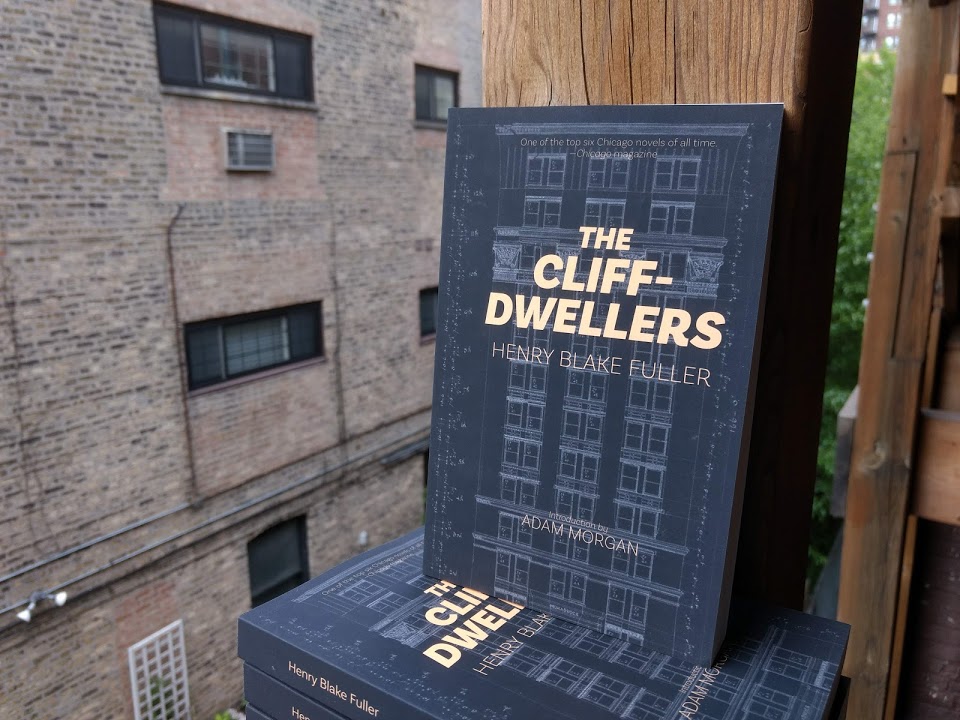 5. A New Edition of The Cliff-Dwellers

This summer, the Chicago Review of Books is launching a small press to republish classic Chicago literature in beautiful new editions. We figured Henry Blake Fuller’s The Cliff Dwellers — the first “Chicago novel” to win national acclaim in 1893 — was a good place to start. Click here for more details or read an excerpt at Arcturus. Copies will be available to purchase online after Printers Row ($12). 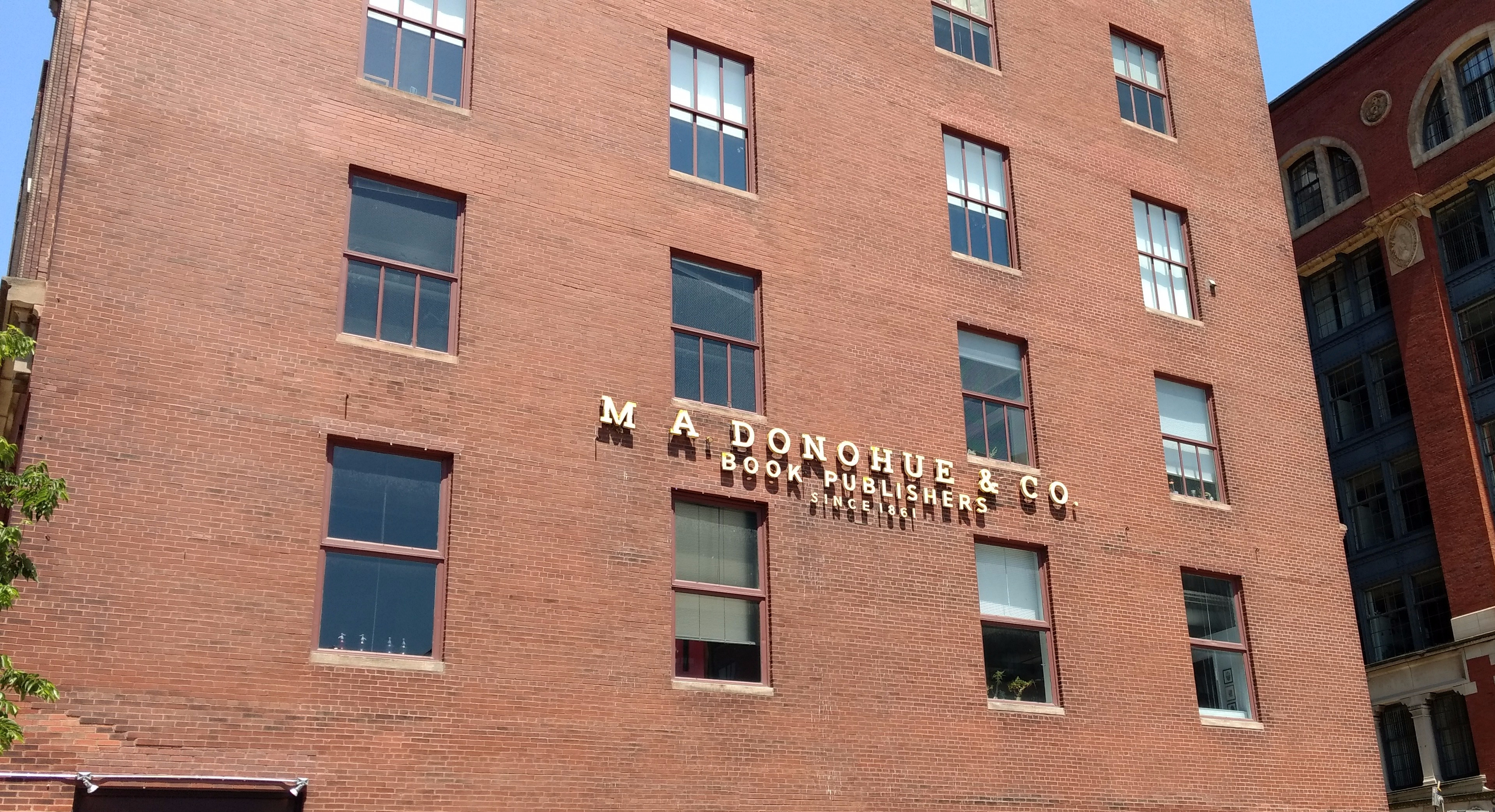 Built in 1883 to house the children’s book publisher M.A. Donohue & Co., this grand Romanesque revival building is now one of the finest loft spacesin Chicago, thanks to the open floor plans and giant windows common among old printing press buildings, which required plenty of natural light (another reason the neighborhood’s blocks are half the size of Chicago’s normal grid: more surface area for windows). 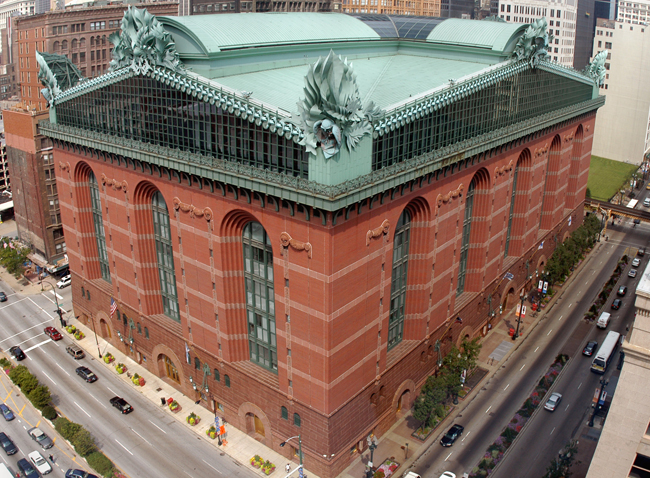 It’s one of the city’s most beautiful exteriors, in my opinion. In 1991, Chicago’s main library collection was moved from the current Chicago Cultural Center to the new Harold Washington Library Center on State Street. The postmodern building is still controversial for its odd, fabulist design. Don’t miss the exhibition spaces or the Winter Garden on the top floor. 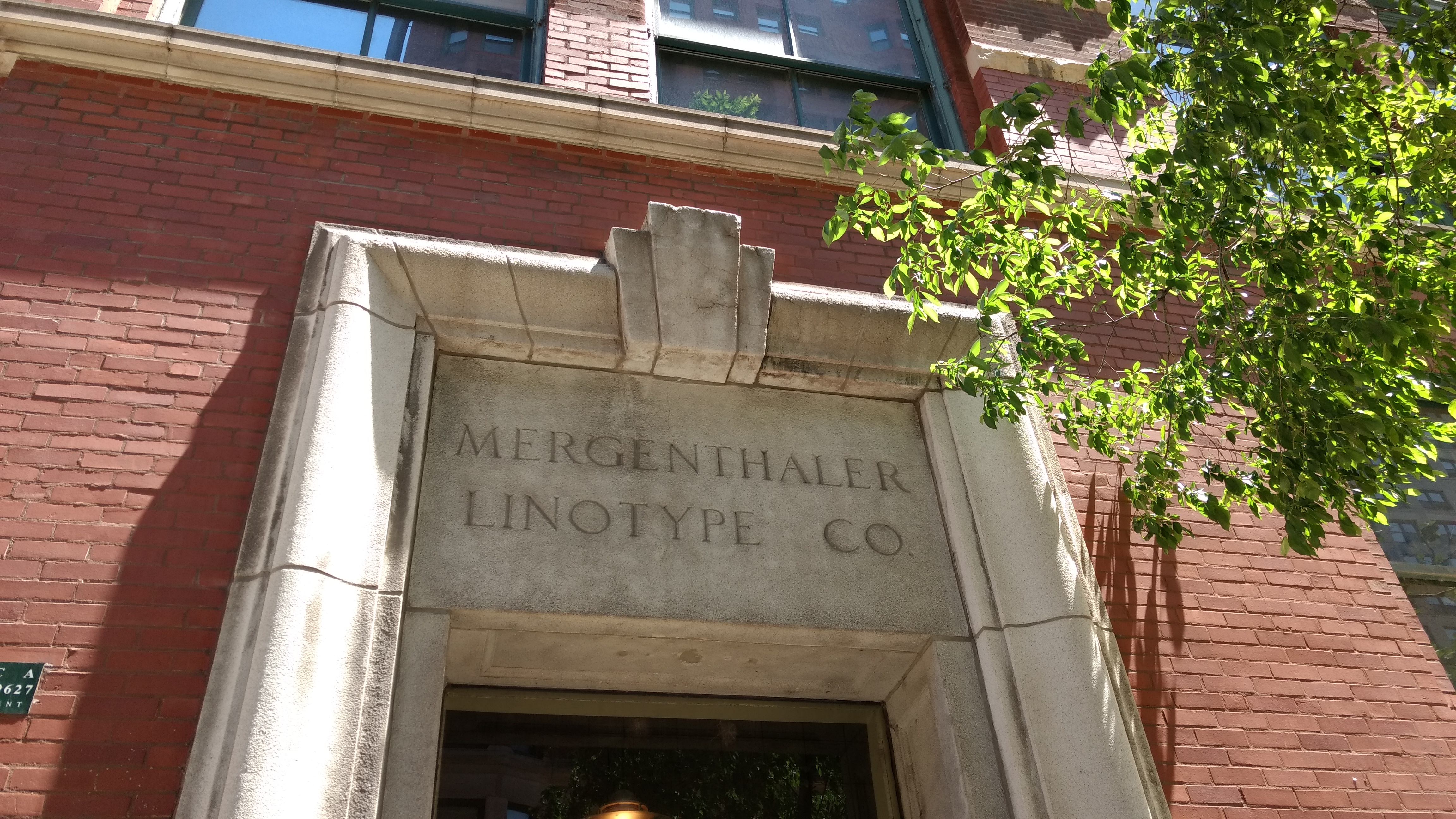 8. The Most Important Building in the History of the Printing Press

Before 1884, all printing had to be set by hand — every single letter. But then a German inventor named Ottmar Mergenthaler came up with Linotype, a mechanized way to mass produce printed materials. Two years after inventing the process in Germany, he moved to this building at 531 South Plymouth Court and opened up shop, thus establishing this section of the South Loop as ground zero for printers. 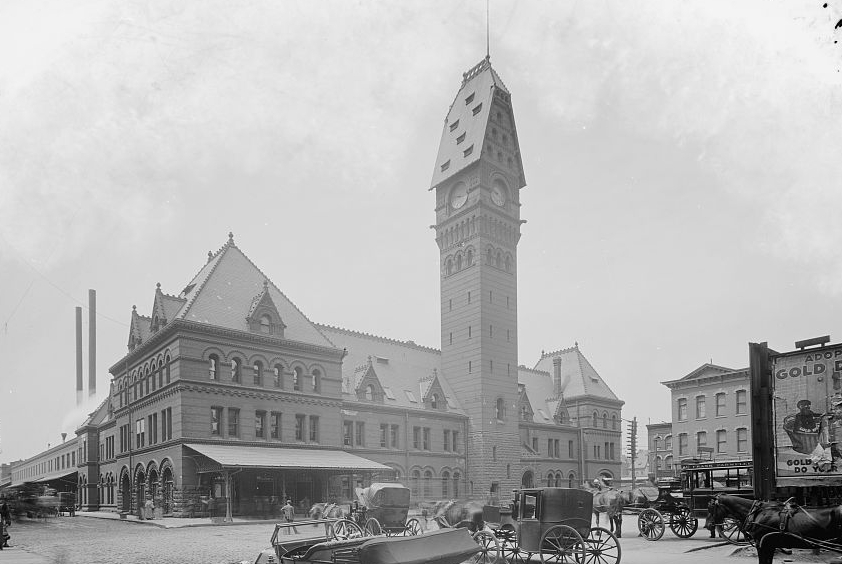 Before Chicago’s Union Station was built in 1925, Dearborn Station was where immigrants, tourists, movie stars, and world’s fair visitors arrived in the Second City. Constructed in 1885, it also played a huge role in the neighborhood’s publishing industry, thanks to underground tunnels connecting the train yard to the basements of the printing buildings. Sadly, the sloping roofs were never replaced after a fire destroyed them in 1922, and the train shed was demolished in 1976. It lay vacant for a few years after, but today it’s a bustling office and retail center, home to a Bar Louie and the Jazz Showcase. 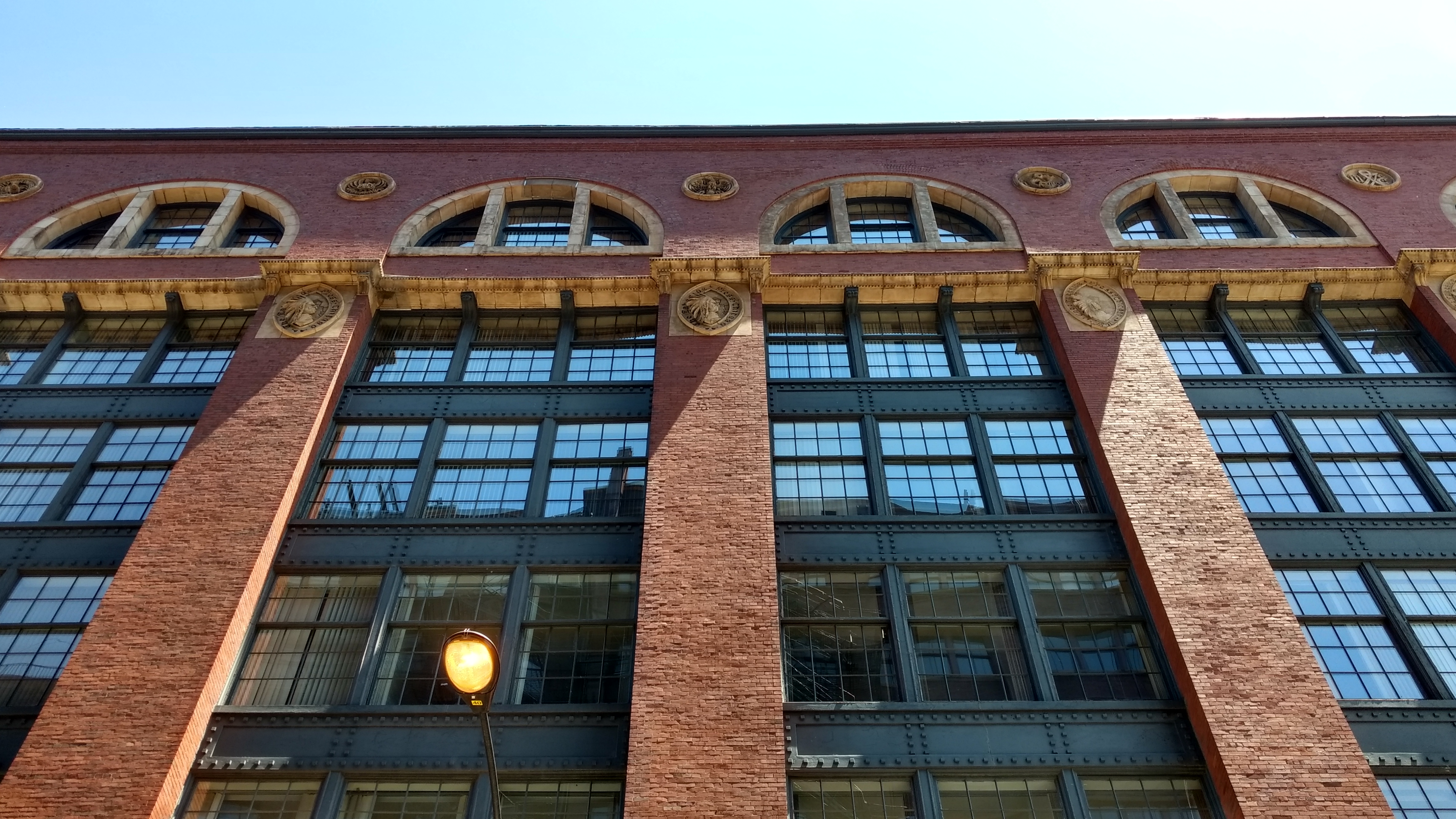 This stupidly handsome building was home to Chicago’s premier publisher during the heyday of Printers Row. Once an imprint of RR Donnelley (yes, that RR Donnelley) Lakeside Press is perhaps best known for its Lakeside Classics series, which began in 1903 as an annual Christmas gift from the company president to his employees: reprints of classic books, bound in cloth and embossed with gold. Today the structure belongs to Columbia College Chicago, but you can still see Lakeside’s literary legacy in the architectural details. (A little further south, a block away from McCormick Place, Lakeside Press’s old plant still stands as well. It’s beautiful too, and now houses a massive data center.)