From Winesburg, Ohio to Olive Kitteridge, The Women of Brewster Place, and A Visit from the Goon Squad, novels-in-stories often invite the same question: Is this a novel or a short story collection? On the surface the book may feel like interlinked short stories, but a closer examination shows that the threads running through create something so cohesive and rich, the work can only be called a novel. Elizabeth Tan’s debut, Rubik, is so clever and imaginative, it merits being part of the literary canon of great novels-in-stories.

The novel opens with “Rubik,” a story about the passing of Elena Rubik and the continuity of life without her in the world. Her phone number, social media accounts, and the fan fiction forum she participated in all do not disappear after her death, of course. It’s a sobering way to begin a book, setting the tone with a meditation of the digital afterlife.

From there the stories begin to seem disconnected. The next story is about a music teacher and later one about characters Pikkoro and Tako (an octopus) and another about a man who cares for a cat for days or weeks before learning it is not actually his cat. One of the most brilliant stories is “Congratulations You May Have Already Won” about the hilarious correspondence between a spam-type email account and a lonely man who tries to engage with the generic solicitation attempts:

Greetings! I must say that I am intrigued by your vague and enticing offers. It just so happens that the relentless efforts of Seed.corp have thoroughly won me over, and, like Robbie struggling to hide his aching boner for Cecilia in Atonement, I am trembling with desire to purchase a Seed product. Any of the breathless array of Seed goods you have mentioned would satiate me; I just really want one now. But I am writing specifically to you, Mr. lkjv, because your optimistic vigor, your sincere interest in my wellbeing and your startling way with words have convinced me to choose you as my trusted salesperson to guide me in consummating this purchase. I shake virtual hands with you, my new friend!

This correspondence is followed by a story that begins to knit these seemingly unrelated vignettes together. What at first appears to be a sprinkling of characters whose lives intersect occasionally, turns out to be a deftly layered story about the intersection of humanity and capitalism. There is the Seed corporation, but also Ampersand, a unisex clothing store with more significance than just fashion. In “U (or, That Extra Little Something)” this intersection is made explicit:

He says I am So Real. The perfect match for the Ampersand brand identity. I’m amused by this idea, as if my body grew into a pre-existing personality, which also happens to be a national brand. But then, I suppose I’m used to my body not quite entirely belonging to me.

The ownership of one’s own body—and mind in the sense of artistic license—is explored. Tan gives a nod to anime, video games, sci-fi thrillers, and fan fiction as she explores loneliness and isolation, artificiality and capitalism. The way she weaves these stories and themes together brings to mind the image of a randomly constructed quilt, but a more apt description would be a Rubik’s cube. At first the stories seem like a scrambled mess, but with persistence and determination, the secret puzzle unlocks and everything makes sense.

But Rubik is more than experimental fiction about humanity and capitalism. Yes, it is a social satire, but it’s also a meditation on time and space. Elena’s roommate ruminates on the lapse between her life before Elena’s passing and after:

I mean, sometimes I just think about what kind of conversations I’d have with Elena, you know, if she came back from the dead. We have Timeline now? We have Seed? What’s the deal with the falling girl? And suddenly there’s all this distance between us, even though we lived in the same time. And then your perception sort of breaks up and you don’t think of the present as the present anymore. All of a sudden it’s the future.

And it’s this bridge between past, present, and future that is one of the central threads running through the story. But like any good novel-in-story, Rubik does more than just allow its stories to connect through theme or character. It isn’t until you finish reading and step back and look, that you see what once seemed like jumbled chaos all lines up symmetrically, connecting all these themes that once seemed at odds, just like a Rubik’s cube. 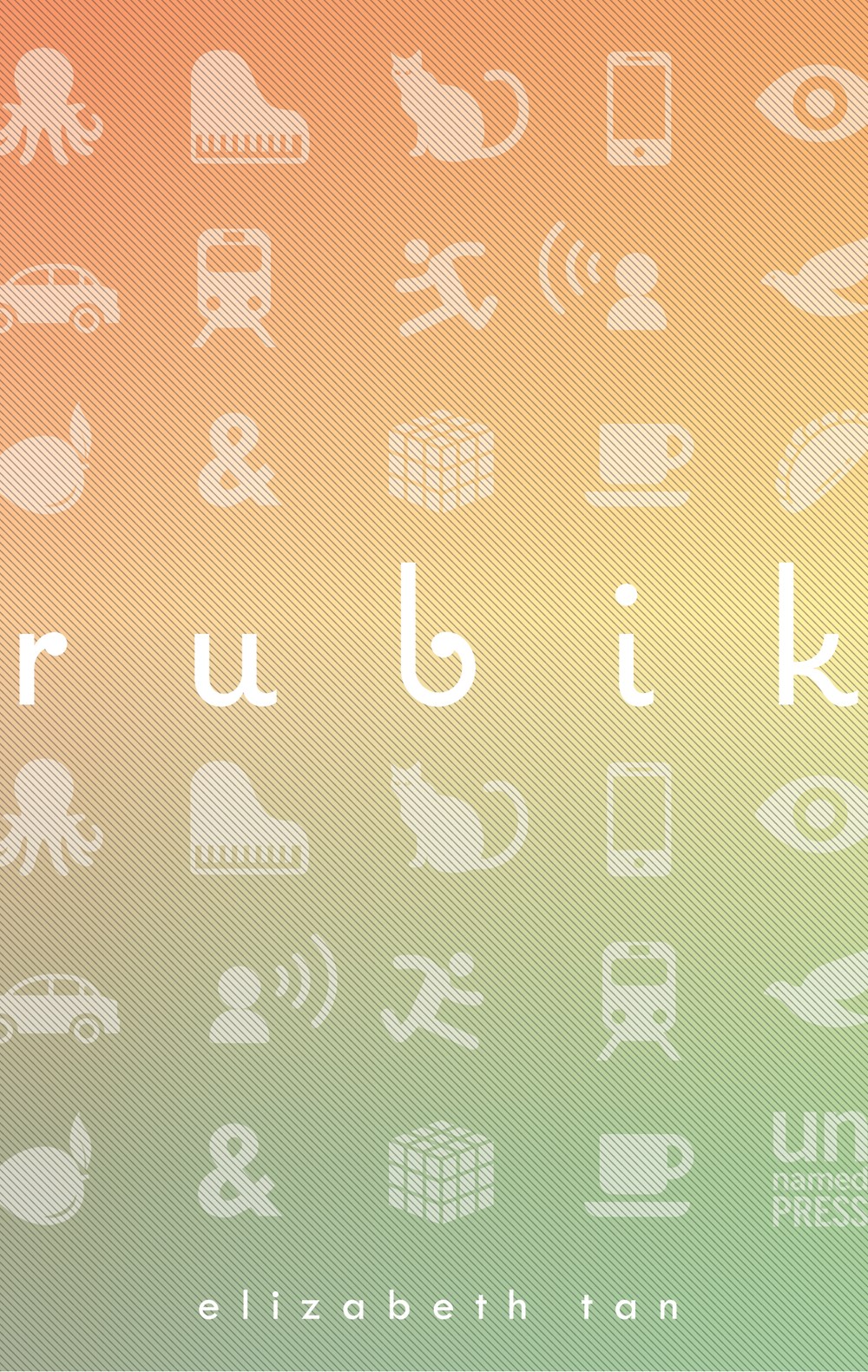 Elizabeth Tan holds a PhD in Creative Writing from Curtin University in Perth. Her work has appeared in Westerly, The Lifted Brow, Voiceworks and The Sleepers Almanac. Her webcomic, Mais Pourquoi, can be found at et-maispourquoi.blogspot.com. Rubik is her first book.