In ‘The Italian Teacher,’ Art Is Sex

The National Institute on Retirement reported last month that 66% of millennials have absolutely no savings for retirement. Business Insider says that millennials are single-handedly “killing the paper napkin industry.” There’s a shade of pink named after us and when we’re not too busy Snapchatting or curating our Instagram accounts, we serve as the Baby Boomer generation’s collective scapegoat for society’s collapsing pillars. Never mind the fact that we are simply existing against a backdrop fashioned from the consequences of the latter group’s actions. But the blame game is a tiresome volley. Shaun Scott opts for a deconstruction instead.

In his latest book, Millennials and the Moments That Made Us: A Cultural History of the U.S. from 1984-Present, Scott considers the decisive happenings that led up to the status quo of today. With no pop cultural reference left unturned, Scott treats these crucial turning points in society as forensic evidence in his investigation. From a close read of Drake—a millennial success story—to a precise breakdown of the capitalism-drenched live news minutes leading up to 9/11, he regards all data and historical instances with equal weight.

Scott offers up a millennial manifesto to set the record straight amidst a chaotic tableau of unchecked Baby Boomers running rampant across the interwebs with misinformation. Via email correspondence, he shared some insight on his process as well as striking sentiments on the state of the Millennial.

What would you say is a defining link between the otherwise disparate experiences of millennials born in the eighties and those born in the late nineties who barely make the cut off?

I use my book as a “poison pill” to talk about the new guise of capitalism. It’s about generational politics on the surface, but the real heart of the book has to do with how the new rules of capitalism are reflected culturally—in sports, in television shows, in music. So I’d say that the unifying link between older millennials and younger millennials—as well as between millennials, Generation X, and Baby Boomers—is that the last thirty-five years of American life have been defined by austerity. By the sense that we can’t martial collective will to solve collective problems. That unions are a thing of the past and social services should be delivered and run on a for-profit basis. That taxes are bad and that if a city or state or country needs good schools or healthcare, you have to rely on philanthropy to provide them. Both young and old millennials don’t really know a world different from that, and we’re united, I hope, in our frustration with how that social order has worked out.

The book is teeming with pop culture references that run the gamut. What’s one you didn’t include, but would’ve liked to?

A professor at North Park University who is using my book in his classroom recently asked me for a definitive list of all of the cultural moments I reference in my book’s 240 pages. There were so many! I think the one I wish I could’ve discussed more was reality television shows like “The Apprentice” and “Shark Tank.” You see so many of neoliberal capitalism’s values reinforced in those shows, but it felt a little too obvious. In the sections where that would’ve gone, I opted for deep readings of LeBron James and Drake instead.

Your voice oscillates between academic and conversational throughout the book. Were you hoping to strike a palatable balance for both Baby Boomers and millennials to enjoy or did you have a more specific audience in mind when setting out to write?

It was basically code-switching, to be honest. As a creative device, I try to approach serious subjects with levity and treat light-hearted subjects with a lot of seriousness. So when I’m talking about a Drake record and how his music is reflective of the anxieties of short-term attachment under late capitalism, that critical, almost heavy-handed, language lands more than if you’re talking about something like The Great Recession.

Meanwhile, a more conversational tone for an event like 9/11 or the Columbine Massacre felt more fitting. As a writer and a thinker, it’s all about getting that creative tension where you’re illuminating something that you once thought was banal—showing how it actually reinforces these terrible power dynamics, or revisiting something that has been written about extensively from a more fresh, personal perspective.

You delve deep into the dead mom trope in sitcoms of the past, which led me to think about sitcoms of today. While mothers do play large roles in family sitcoms currently on the air (Black-ish, One Day at a Time, Modern Family), we’re also seeing the propagation of the workplace sitcom (even after the series wraps of The Office and Parks and Recreation). Why might millennial viewers be drawn to workplace scenarios? Is it because it’s all we know and can relate to?

I think we’re defined by work in ways that previous generations were not. If you were working a 9-to-5 job fifty years ago, there was at least a sense that there was “downtime”—a part of your schedule that was not devoted to productive activity and profit-making.

But when wages are as low as they are for millennials and you have this ability to chase a hundred opportunities just by pulling out your phone, I think we’ve internalized our identity as constant workers, constant creatives, and constantly having to have something to offer. It leads to a lot of anxiety, and I think our popular culture reflects that. When Jay Z rapped about the “Hard Knock Life” or Rick Ross said “Everyday I’m Hustlin,” this is what they were talking about.

You discuss Black millennials not being paid for their contributions (e.g. viral memes) as well as millennial interns working for exposure in lieu of payment. Yet, there’s this idea perpetuated by Baby Boomers that this demographic is desperate to become overnight successes. Couldn’t we say that, if this is true, this desperation stems from a desire to be self-sufficient and capable of living a well-adjusted adult life? Or is that too generous?

What many people don’t understand about millennials is that in order to be an overnight success, a lot of us have to work all night. I do reference Doreen St. Felix’s article, “Black Teens Are Breaking The Internet and Seeing None of the Profit,” because it’s a great example of how we think 21st century technology is a venue for the meritocratic ideal and a land of opportunity, when really it’s just another way of intensifying divides of race, class, and gender that already exist. You have these major corporations profiting off our jokes, our wit, our slang, and then not doing much to downwardly redistribute the accrued wealth. Capital is fiscal, but it is also cultural, symbolic, and political. And all those forms of capital can be stolen. Just ask any of the millennials who Tweet a joke that ends up on a news website that collects ad revenue thanks to the content they created.

In your argument in favor of changing the minimum age to run for president from 35 to 25, you write that the constitutional status quo “. . . enforces a sense of second-class citizenship—a feeling of being trapped in a world run by ‘adults’.” For a lot of millennials (myself included), a similar feeling is conjured when considering the fact that we can’t afford to live without roommates well into our thirties or that our freelance and temp gigs don’t make our lifestyles readily conducive to starting families or becoming homeowners. What new markers or milestones would you say millennials are beginning to use to signal their entrance into adulthood?

I think they’re internal, emotional ones rather than external social rituals. They have to do with attaining closure about past relationships, committing to place, and forgiving ourselves. I would say that the major markers of maturity for many millennials have to do with achieving psychological security and not recycling what was done to us.

There was a great article that came out last year titled “Millennials aren’t coddled—they just reject abuse as a management tactic.” That article was about work, but I think it could’ve been describing a host of things—parenting, teaching, relationships. It’s all about not reproducing the values that hampered us or the behavior that kept us from blossoming. 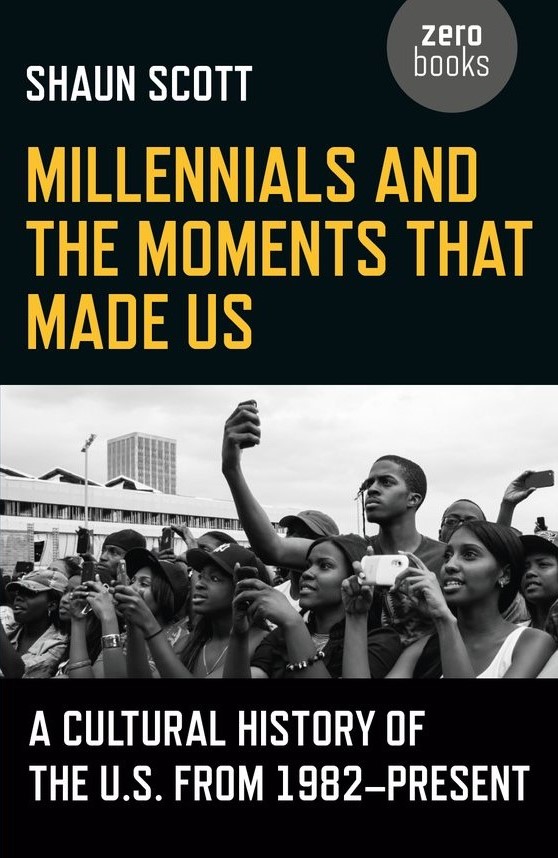 NONFICTION
Millennials and the Moments That Made Us
by Shaun Scott
Zero Books
Published February 23, 2018

Shaun Scott is a writer, historian, and filmmaker based in Seattle. He is a featured contributor to City Arts Magazine, where he writes a column about cultural life under late capitalism called ‘Faded Signs’. His writing has also appeared in publications like Jacobin, Sports Illustrated, The Monarch Review, and the film journal Senses of Cinema. He is the author of the e-book Something Better: Millennials and Late Capitalism at the Movies.