‘The Hummingbirds’ Puts A New Spin on a Classic Hollywood Thriller

A golden disc of sun floats in the sky above the mostly unprotected skin of children splashing in the kiddie pool. Hands reach into overstuffed coolers, pulling beers and grape sodas through chunks of melting gas station ice. A cloud of black smoke plumes into the air as the lid of a steel drum barbecue grill is lifted. Inside, flames lick at a foil tub of salmon seasoned with salt and fresh ground pepper, unshucked ears of corn — and sizzling hippopotamus patties stuffed with blue cheese.

Yes, hippopotamus. Memorial Day family reunions and Fourth of July cookouts smell a little different in the version of America that Sarah Gailey has created in River of Teeth, the first book in a duology (followed by Taste of Marrow).

Farming hippos for meat almost became an American industry, but for practical and safety reasons did not. Gailey explores an alternate history wherein that did indeed happen, and the result is an exciting take on the Western adventure story. Though it takes place in the swamps of Louisiana, River of Teeth features hippo-riding thieves and evil knife-wielding tycoons.

We are introduced to this world through the eyes of Winslow Remington Houndstooth as he finalizes the details for a “job” that will ultimately become a heist for his rag-tag team of ne’er-do-wells. Think Fast and Furious, but with hippos instead of cars; or Ocean’s Eleven, if George Clooney and Brad Pitt were more than just friends. Each of Gailey’s characters has their specialty: Hero has poison and explosives, Archie is the clever con artist, Adeila is the wildcard contract killer, and Cal is the gambling-obsessed connection that makes it possible to take down the equivalent of the Andy Garcia character in Ocean’s­—in this case, Travers.

The caper, or “operation” as Houndstooth insists, is a government job to destroy a gate along the Mississippi River where dangerous, feral hippos reside. The goal is to assemble a team to help force the wild hippos to migrate south opening up some fertile territory to exploit, but Houndstooth is simultaneously preparing a frosty dish of payback for a wrong done him in a previous life. Everything is going to plan until Travers makes a few unexpected appearances, heightening the suspense along the way.

Along with the mischievous plot, Gailey handles each character with care and respect despite the story’s brevity. The best example of the tenderness with which the author treats each player lies with Hero. The narrator refers to Hero with “they” and “their” pronoun use, informing the reader of an aspect of Hero’s identity. But the narrator simply does it. It is not left up to Houndstooth to explain Hero’s non-binary gender preference during their first encounter. In fact, Hero assumes Houndstooth will question them, wondering if Hero should be referred to as “he” or “she.” However, Gailey doesn’t let the reader off that easily, even subverting Hero’s expectations:

Hero walked toward Houndstooth until their boots touched. The laughter on Houndstooth’s lips died. They were nearly the same height, and their noses were less than an inch apart. Here could smell the sweet tea on their own breath.

“Ask. I know you’re wondering. If we’re going to work together, you may as well ask.”

“Houndstooth swallowed. “I…” He paused, looking down at Hero’s mouth, then looked back at their eyes.

“How did you drink the poison? Without it killing you.” Hero blinked. That wasn’t the question they had anticipated.

The conversation goes on from there, leaving the question of gender behind to discuss matters more relevant to the job proposition. Later, a pregnant Adelia mentions that she has no need for a father for her child anymore. Perhaps she will raise her child with another woman, but she makes it clear she is done with men. Her lifestyle leaves no room for them. The way gender markers are utilized or set aside shows Gailey’s willingness to join a list of authors who challenge consistent gender binary dynamics and tropes to make her characters complete and memorable.

Gailey’s use enthusiasm for language is as refreshing as an ice-cold glass of sun-brewed sweet tea–minus the poison, of course. She writes about hippo-riding heroes with a child-like fondness any reader would enjoy. Well paced and clear, River of Teeth is a delight. 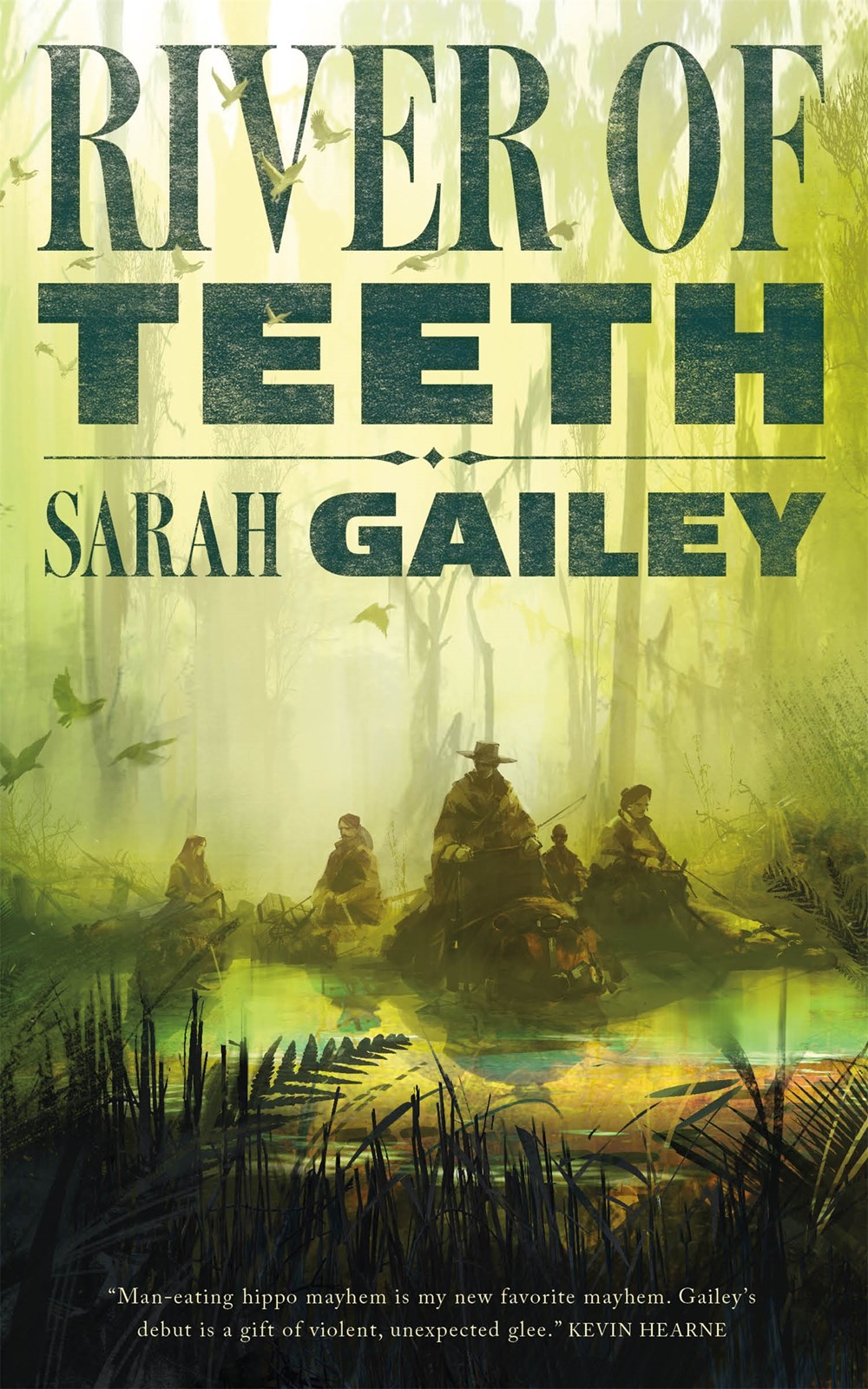