Join Us for the 2017 Chicago Review of Books Awards 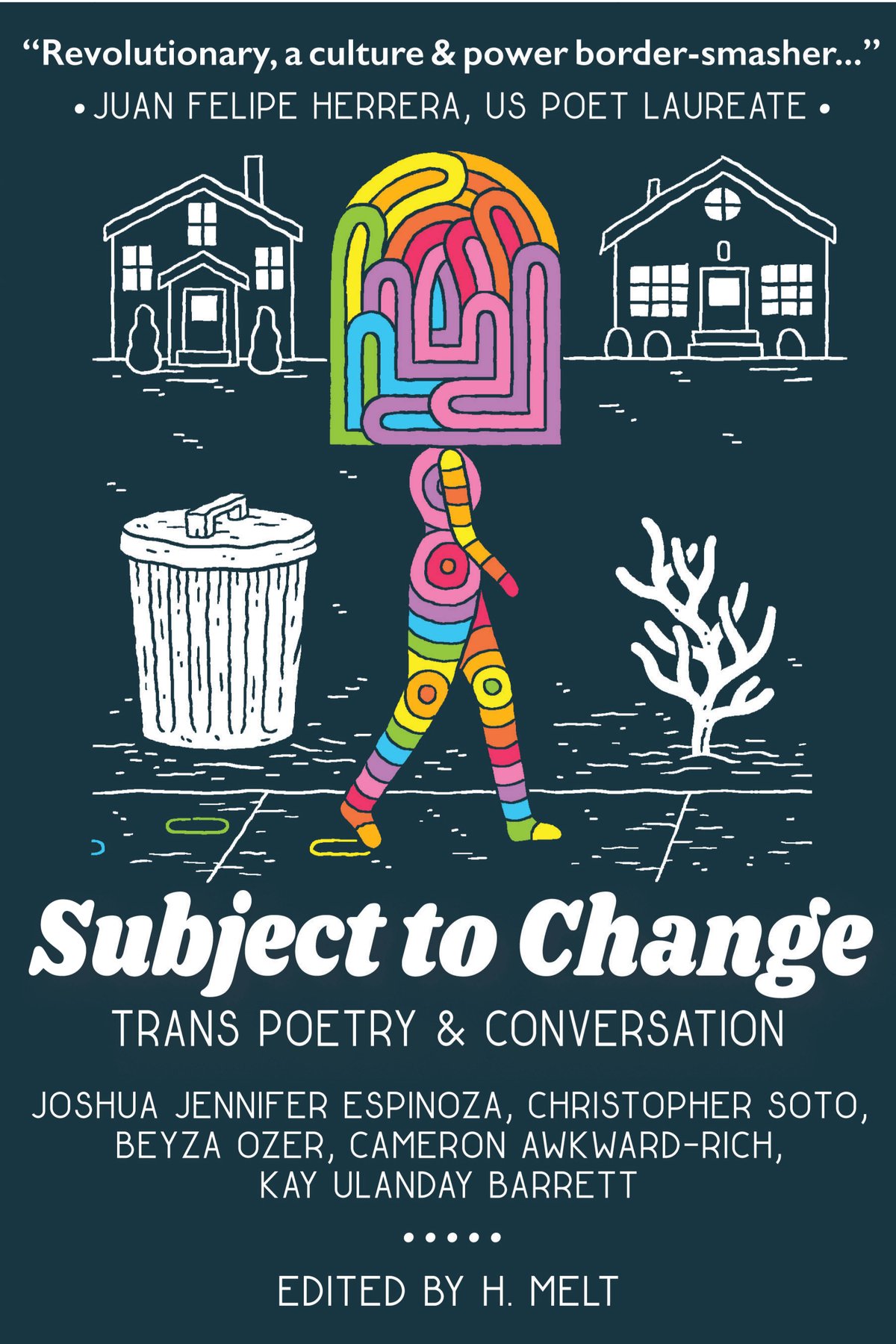 A new anthology of poetry by trans poets is forthcoming from Sibling Rivalry Press. Featuring poetry and interviews, Subject to Change: Trans Poetry & Conversation is a collected testament to the power of trans poets speaking to one another—about family, race, class, disability, religion, and the body. This anthology includes a range of trans experiences and poetics, expanding the possibilities of what it means to be both trans and a writer in the twenty-first century.

I spoke with the anthology’s editor, H. Melt, who’s also a poet, organizer, and educator, and whose work proudly celebrates Chicago’s queer and trans communities. Their writing has appeared many places, including In These Times, The Offing, and Them, the first trans literary journal in the United States. They are the author of The Plural, The Blurring and editor of Subject to Change: Trans Poetry & Conversation. Lambda Literary awarded H. Melt the Judith A. Markowitz Award for Emerging LGBTQ Writers, and they’ve also been named to Newcity‘s Lit 50 list, as well as Windy City Times‘ 30 under 30. H. Melt co-leads Queeriosity at Young Chicago Authors and works at Women & Children First, Chicago’s feminist bookstore.

Thanks for taking time to answer some questions about this anthology. It was almost a year ago that we spoke about the presence of trans poetry and especially poetry by trans people of color in literary magazines. You were excited about the idea of bringing poetry by trans people of color to readers. This anthology you’ve edited is the fruition of that idea. While there are other anthologies by trans poets, what makes yours different? What did you want to offer readers with this anthology that wasn’t already available?

There’s only one trans poetry anthology that I know of, which is Troubling the Line. The publication of that book in 2013 was transformative to me, and I think the poetry community as a whole. It woke people up to the presence and work of trans writers, alongside trans anthologies in other genres, like The Collection. It also helped trans poets themselves in many ways.

Subject to Change is intimate. There are only five poets in the collection, and there’s an emphasis on conversation. The book actually started with the interviews I was doing with trans poets—these are people whose work spoke to me, that I wanted to support, and get to know. I’ve worked with, organized readings, and read with almost everyone in the anthology. It’s about building relationships with other trans poets for me. 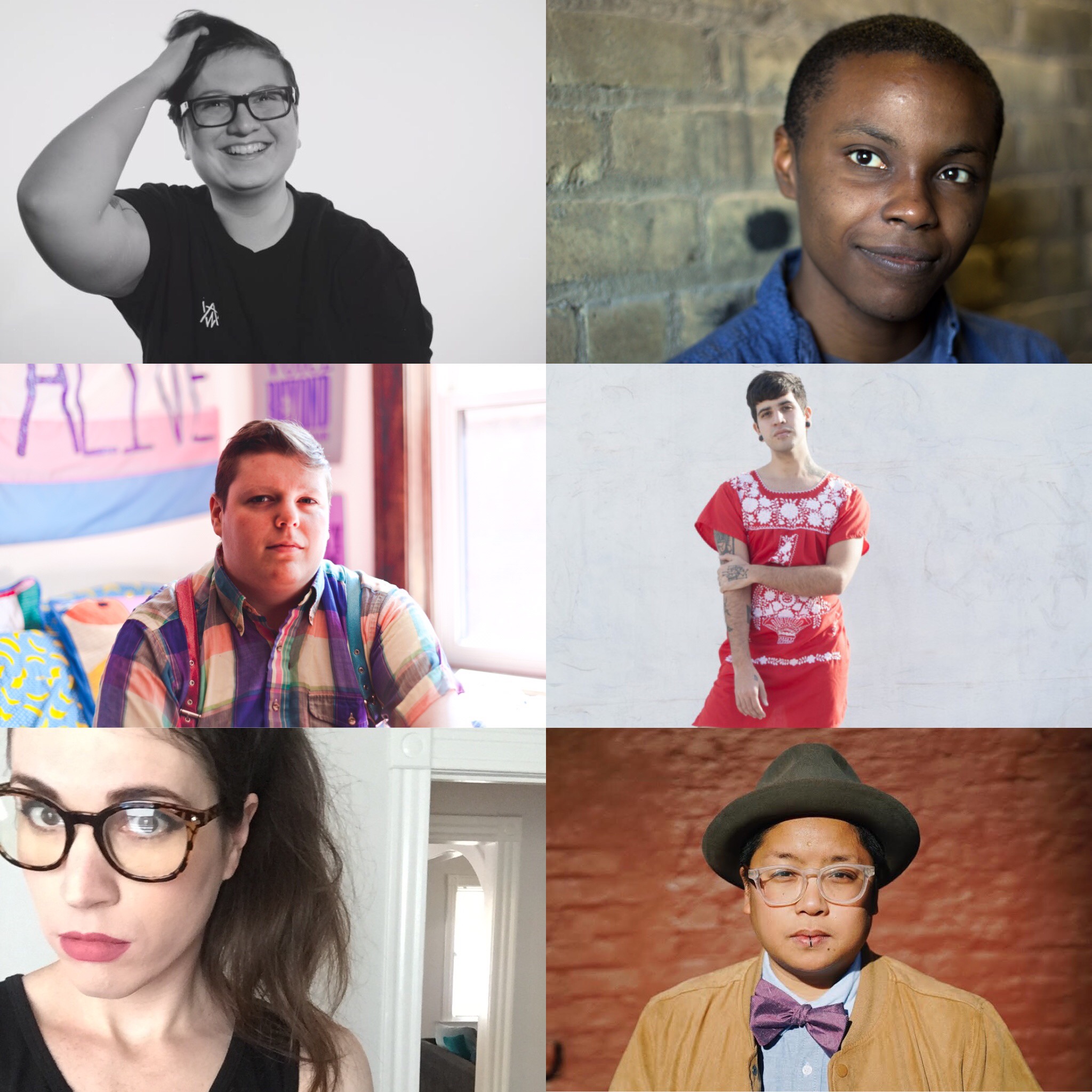 It can be hard to get review or press attention from fellow trans writers. There’s a lack of trans critics focusing on trans literature and art. All the poets in the collection have only released one full-length book, and very recently–within the last year or two. Trans poets often debut on very small presses. I wanted to capture a snapshot of what trans poetry looks like now, from the perspective of debut authors.

I am very cognizant of the ways that white supremacy operates within queer and trans communities. All of these poets already have audiences and communities of their own, some of which definitely overlap. My role was to bring them together, organize, and advocate for their work.

It’s important for those in the literary community to build relationships with each other. There has been a sense of urgency, for as long as we can remember, to be inclusive and to feature and publish diverse writers. Why do you believe it’s difficult to draw attention to trans writers in literary publications?

Most literary publications don’t try to be inclusive of trans writers. Have you seen the VIDA statistics that were just released about trans and nonbinary writers? It’s so depressing. For example, only two pieces published in the New York Times Book Review out of its 1,954 pieces were authored by nonbinary people. How many books written by trans or nonbinary people were reviewed? In Poetry, 1% of bylines were by writers who are non-binary. Major magazines tend to be the least inclusive. It’s really smaller publications like The Offing, or trans-focused publications like Them doing the hard work to bring attention to trans writers.

Your assessment of publications by trans writers reminds me of similar trends with Latinx writers. Often when publications and people, in general, speak about diversity and people of color, Latinx writers are overlooked. For decades, Latinx writers have been published by very small presses and only in recent years has there been an interest by mid-sized presses, particularly in poetry, to publish them. Your snapshot of trans poetry is in many ways a diverse perspective. What can you tell us about your choices for inclusion? What do these poets represent or embody for you and for the trans community?

To your point about Latinx writers, the literary world has a very narrow view of who and what constitutes a diverse publication. So often, we are only invited to fill someone’s quota, if we’re invited at all. Or the focus is on our identities, instead of our work. When leadership within the literary community begins to shift, and you have editors who are not straight white men, the change happens at those larger institutions and publications. For example, Kevin Young is doing a fantastic job as the Poetry Editor at the New Yorker.

All of the poets in the anthology are making deeply political work. They are prison abolitionists, activists working for the rights of undocumented people, and poets confronting ableism in their daily lives, as well as in their writing. A lot of their poetry is deeply personal, without being constrained by the cis gaze. What I find most comforting in each of their work is their honesty, especially about their complicated relationships to home, their families, friends, and themselves. They are critical of cis people and discuss issues like police brutality, mental health, Islamophobia and racism from a trans perspective. These are all important topics within the trans community, which often get lost in mainstream discussions about trans politics.

The poems in the anthology are deeply moving and illuminating of the trans experience. The poems also include a prose component–interviews. Why did you find it necessary to include the interviews with the poems?

It’s important to hear trans people discussing their own writing. And it’s important for trans people to be in conversation with each other. I wanted to offer a more in-depth and critical perspective on each of the poets. There’s a lack of good criticism about trans writers. A lot of the criticism focuses on writers being trans, as opposed to what their writing actually does–in terms of language, tone, style, or format. I focus on the poets as writers, instead of tokenizing and questioning their transness. I would implore future critics to do the same.

A recent announcement was made by one of your anthology’s contributor’s that they will be editing an issue of Poetry magazine focused on trans poets. Do you have any thoughts about this forthcoming issue?

I think Christopher Soto is a great editor. I love Nepantla, the journal and forthcoming anthology featuring queer and trans poets of color that they edit. I have no doubt they will do an extraordinary job.

However, I hope that Poetry and Don Share don’t take all the credit or become highly celebrated for supporting trans writers with this special issue. We should be included in every issue. Inclusion should be part of the editorial practice. It should be the rule, not the exception. Natalie Diaz has talked about this. The focus should be on celebrating trans writers, not glorifying one editor or magazine.

As a trans person who worked at the Poetry Foundation for several years and left very recently, I experienced so much discrimination in that space. I left because of transphobia, racism, sexism, rape culture, and an overall toxic work environment. Working there destroyed my health, physically and mentally.

I am excited to see more support for trans writers, always. That’s the focus of my work, of my life. That’s what I live for. When I was going through a difficult time this summer, my publisher Bryan Borland reached out to me. He cared. Working on this anthology improved my health. It brought me out of a depression. I’m so happy this anthology is about to launch and in such a supportive and queer-focused press. I can’t wait for what comes after the anthology in the realm of trans poetry.

Subject to Change, an anthology of poetry written by trans poets hit shelves on November 16th. It is only the second anthology of its kind in the literary market. Published by Sibling Rivalry Press, Subject to Change is an anthology celebrating the work of five poets who are unapologetically trans: Joshua Jennifer Espinoza, Christopher Soto, beyza ozer, Cameron Awkward-Rich, and Kay Ulanday Barrett. Find more information at Sibling Rivalry Press.