Nicola Lagioia’s English-language debut, Ferocity, opens with a jarring scene: an unnamed girl, “naked and ashen, and covered in blood,” stumbles down a dark street, observed only by insects, a rat, and a “sky dancer lunging skyward.” Translated by Antony Shugaar, this sumptuous opener seems to set up a typical murder mystery, but it quickly wields allegory, social realism, domestic drama, and myth to create a layered and expansive novel.

The bloodied girl is Clara Salvemini, daughter of Vittorio Salvemini, a wealthy real-estate magnate in Bari, a port city in southern Italy. His daughter’s death occasions memories of his humble origins. In place of his grief, or his questions, we first learn about his early days, when he had to say both his first and last name at the country club with the hope that the recipient would be “capable of glimpsing them from the future, the letters, from that perspective, written in ever larger typeface, the way he saw them himself on the days when inspiration (nothing but the anguish of the talented) allowed him to perch at the far end of the decade.” At the time of Clara’s death, his rise to wealth and power is already complete, and he’s too busy to bother with the many invitations he receives from the club that once scorned him. 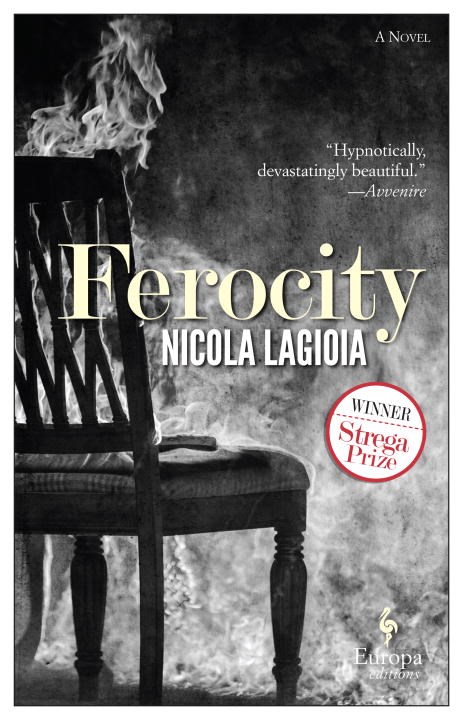 The flashback presages Ferocity’s intermingling of noir thriller and domestic drama. The family’s reactions to Clara’s death becomes a throughway for exploring its odd dynamics as we watch each family member process her death. Her mother remembers the difficulty of her pregnancy with Clara, implying it augured her difficult life, and we later learn Clara’s sister has created a fake Twitter account under Clara’s name. We also witness Vittorio’s influence on his children’s lives. Clara’s husband works for Vittorio while Ruggero, one of Clara’s brothers, is used as a signatory on company projects, even though he is a surgeon by trade. While the family grieves, they make asides to the missing brother, Michele, who’s described as “the craziest one of all,” and these oblique mentions create a new mystery to coexist with that of Clara’s death.

We learn Michele has worked as a journalist and has had some unlikely success, with a spattering of pieces published in Italy’s most prestigious newspapers. He is portrayed as both brilliant and unstable, but even his move to Rome doesn’t disentangle him from his father’s influence; it’s implied that his pieces were published because of his last name.

Once Michele arrives in Bari, his and Clara’s intense relationship from adolescence inserts into the novel the story of their childhood traumas. They had a strange, claustrophobic love for one another, such that when Clara went to England for a study-abroad program, her absence devastated Michele. On the morning of her departure, the prose becomes elegiac as it describes Michele waking to her absence, seeing the “puddle of light on the floor” a “testament to ten hours of sleep,” and going downstairs to find “three empty mugs. The glitter of the stove top in the glare of the late-August light.” Clara’s original absence becomes an origin story of sorts for Michele’s future instability, as well as for her own, for when she returns to Bari to find him deteriorating, a guilt settles over her. Once Michele leaves for the army, she finds herself in the same lonely and vulnerable position as he had been in while she was in England, which opens her up to a seedier crowd.

After Clara’s death, Michele conducts an obsessive investigation that drives the narrative out into the Bari streets, where he encounters old acquaintances, like the editor of a newspaper who published him when nobody else would, and unrepentant men, like a gym owner who used to sleep and snort coke with Clara. These untrustworthy characters, whose accounts Lagioia gives great attention to, compile into a throng of greed, lechery, and betrayal. Like some unstable and desperate version of Philip Marlowe, Michele unravels the city’s rotten center, where he discovers his own family resides.

As Michele continues to explore and expand the faults that led to his sister’s death, Ferocity develops a numbing bleakness. Time and again Michele encounters people who have faced moral dilemmas and chosen sin over righteousness, and the consistent misanthropy blends the ancillary characters into iterations of a type, which weakens the effect of having so large a cast.

Despite this Hobbesian world, Michele holds to a distorted hope. When a stranger asks, “Do you know what scientific discipline best explains the new century?” and answers the question himself, “Ethology. Animal behavior…put a starving fox in front of a herd of rabbits. Run into a piazza full of doves and you’ll see them fly. Find me a dove that doesn’t fly,” Michele gives an ambivalently hopeful response: “We aren’t animals. We are strange.”

Though Michele has his own demons, his caring for Clara becomes the novel’s best display of the selflessness and strangeness a person can exhibit. Often, after a person has told him about Clara’s life, he asks one final question, seemingly irrelevant to her death. He asks if she ever talked about a brother in Rome, as if he were still that lonely adolescent, wanting only to know his sister cared for him, but the people respond with variations of the same gutting answer: “A brother? In Rome? I wouldn’t know about that. I really don’t think there was another brother in Rome.” While the investigation maintains the novel’s whodunnit roots, the family saga is never set aside for cheap, visceral thrills.

With Ferocity, Lagioia offers mystery, family drama, and social critique by developing a range of voices within an expansive story. By blending potentially disparate genres, Lagioia creates a dialogue between them. He layers mysteries atop Clara’s death that heighten its stakes. The murder mystery, the family drama, and the urban portrait each inform the others, and the sprawl of narratives creates a portrait of a city’s deprivation and a brother’s desperate attempts at redemption.

Nicola Lagioia is an editor for Minimum Fax. He is the author of three novels and a collection of short stories. His books have been awarded the Strega Prize, the Premio Volponi, and the Premio Viareggio, among others.

Unlikable Protagonists and Morality in “The Easy Life”

A Window Into Both Past and Present in “Hawa Hawa”