Walter Benjamin called Paris “the capital of the nineteenth century,” but when it comes to identifying its twentieth-century counterpart, we would be hard pressed to see past his hometown, Berlin — the city at the heart of so much history. In Here in Berlin, Cristina García explores the legacies and consequences of that history, along with the never-ending quest of the individual to find meaning and connection.

The central figure of Here in Berlin is The Visitor. She collects and relates an anthology of micro-stories from the residents of the city she encounters in its streets. These stories are dominated by the shadow of World War II — escaping Nazi terror, surviving the collapse of society, and collaborating for the spoils of conquest. But even those not directly emerging from that conflict are overwhelmed by its influence, and the Cold War’s influence on the city. 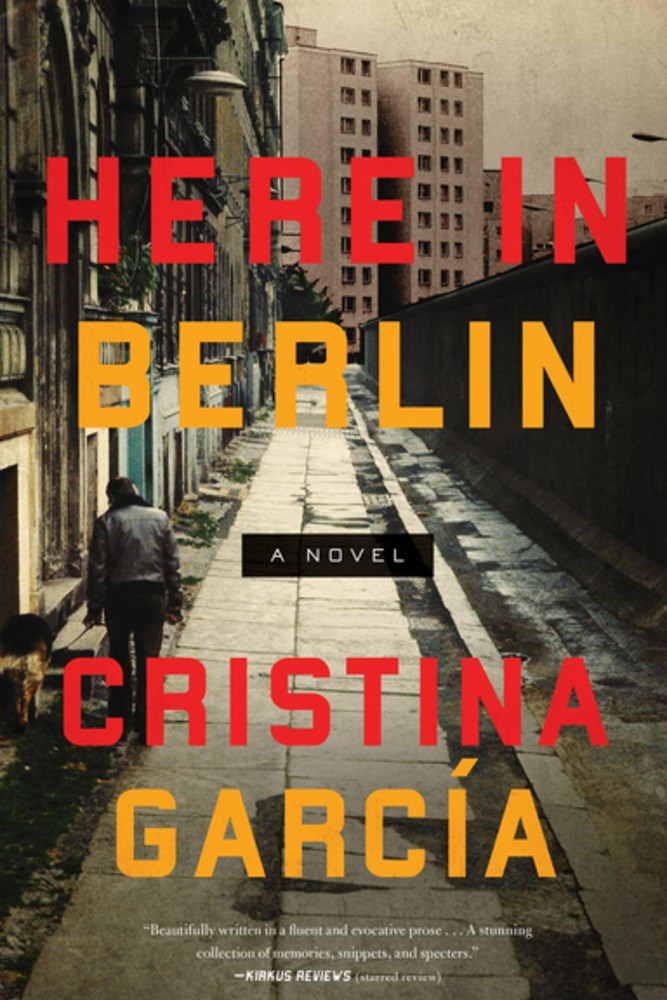 Individual tales strike starkly diverging tones. A Cuban’s story of his kidnap by a German submarine is told with a gentle humor of incongruity and shared humanity. Two female Russian soldiers tell of their domestic happiness together in Berlin after entering with the Red Army and never leaving. But alongside these tales we find a Jewish woman escaping Nazi detection by hiding in a sarcophagus for thirty-seven days and an elderly woman recounting the horrors and repercussions of being brought up in a Nazi ‘breeder’ program. Overall, however, while the mood veers from one perspective to another, the collection is united in its haunting and elegiac tone. These are largely the stories of people who are older or similar in age to The Visitor, in late middle age, and so they are looking backwards, evaluating their experiences; justifying their mistakes, rationalizing their failures, or reminiscing on happy times. García treats each story with compassion and respects that every recounted story is a cocktail of unreliable memory, deliberate lies, and half-remembered truths.

Throughout the novel, we are confronted by the collision of unexpected conjunctions that occurred east of the wall. The Soviet presence led to surprising migrations that jar with our image of the city, such as the Vietnamese engineering student turned florist at the Charlottenburg S-Bahn station, along with Russians, Angolans, and most consistently, informed by García’s own nationality, Cubans. The Visitor describes these as “the unlikely bedfellows” produced by the “political upheavals and displacements of war,” and her emphasis on these stories highlights the partialities of our accepted historical narratives.

As much as Here in Berlin is an exploration of the micro stories which form the majority of its text, it is also an examination of solitude as deliberately pursued by The Visitor, “unoccupied, disconnected, alone, invisible.” Isolating herself in a foreign city in order to disappear and resurface “as a new version of herself,” she uncovers stories that emphasize one main idea — that no matter what came before, we are all alone in the end. While it is true this produces a sense of individual powerlessness, García also notes that in the course of collecting reminiscences, The Visitor finds physical change reinvigorating her life: “Her body wasn’t done, not yet.”

The stories that comprise Here in Berlin are beautifully related with a perfectly pitched sense of melancholy and pathos, bound into a delicate yet powerful whole by The Visitor’s own struggles to preserve and renew her sense of self while forming a new perspective to live by. As Kaspar, an amnesiac photojournalist, explains to The Visitor, “Our last redoubt in the world is wonder. Wonder and unknowing.”

García successfully projects this truth by grounding extraordinary stories within the fabric of the everyday, while also defamiliarizing territory we presume to know well.<

Cristina García is the author of seven novels. She is the recipient of a Guggenheim Fellowship, a Whiting Writers’ Award, a Hodder Fellowship at Princeton University, and an NEA grant, among others. Recently, she completed her tenure as University Chair in Creative Writing at Texas State University-San Marcos and as visiting professor at the Michener Center for Writers at the University of Texas-Austin.

A Witty Satire with a Wicked Heart