Erika L. Sànchez Is Having One Hell of a Year

Caitlin Doughty has built a life around death. You might expect that phrase to be qualified with “not in a morbid way.”

You be the judge.

Caitlin Doughty is into death. It’s her life’s passion, actually, which has turned her into an activist. Not against death—oh no. What Doughty cares about are the practices Americans in particular have adopted over the years in order to rope off death as something unnatural—something to be controlled, cleansed, and checked off our to do list when it happens to people we love. 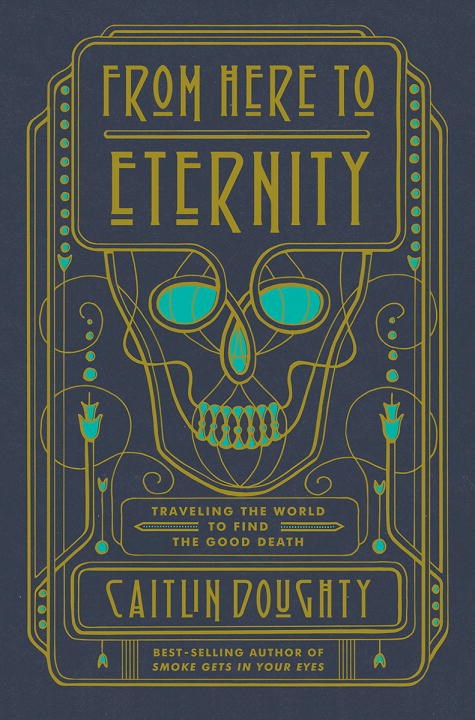 “In American death culture, we treat death like a transgressive act, hiding it away, making it weird,” Doughty says. “We make no attempt to normalize death in our culture, when it’s the most normal thing humans do.”

Doughty, a graduate of the University of Chicago, spoke as part of the Chicago Humanities Festival at Northwestern University’s Alice Milar Chapel in Evanston on Saturday. Her topic? You guessed it — death.

The event was part of the launch for her new New York Times bestselling book, From Here to Eternity: Traveling the World to Find the Good Death, which details Doughty’s travels to study the death and funeral practices around the globe. She makes stops in Indonesia, where families sometimes keep the dead among them for years, and in Japan, to witness the ritual of kotsuage, when a deceased’s person’s family carefully sifts through cremation ashes for bone fragments with chopsticks. What she learned about these traditions — although so different from tradition in the US — is that they are completely normal.

“We think we are the respectful ones and the way other people handle their dead is weird and disrespectful,” she said. “No matter how foreign a death care tradition is—families who hang out for ten to twenty years with the corpse after the loved one died, praying for intervention from a skull, pulling remainders of bones out of a compost pile—when you are there with the people who practice it, it’s normal. Not just for me. If you were there, it would seem normal to you, too.”

But what Doughty really cares about is “death care” in the United States. At age 22, she became an employee at a crematorium. She was the person placing bodies into the cremation machine and pushing the button. There’s more to that job, the ins and outs, the tools, the troubleshooting, the planning of a day’s work around the bodies you’ve been given to work with. If you want to know the details, Doughty’s indoctrination into the the crematorium career track is fully explained in her debut title (also a NYT bestseller), Smoke Gets in Your Eyes: And Other Lesson from the Crematory.

After the events of her first book, Doughty went to school, became a mortician, and started her own nonprofit funeral home, Undertaking LA, where death care is centered around the grieving. In her new book, From Here to Eternity, Doughty writes from the perspective of a colleague as she travels the world to see all the ways humans respect and revere their dead.

“The number one thing the American funeral industry could do better is simply listen to the families that come in their door,” she says. “Our funeral industry used to be family-driven but is now a for-profit industry that puts distance between us and our dead.”
We tend to think of the hands-on approach to funeral care — washing and dressing the body ourselves, for instance — as being a thing so-called “advanced societies” don’t practice, Doughty says. But other communities just as high-tech as the US haven’t confined their mourning practices the way we have.

“In Japan, they are involved with their dead, sitting with the bodies,” she said, referencing the “corpse hotel” she visited, where the grieving family can spend time with their dead, on their own timeline instead of a funeral director’s. “People think these ‘foreign’ and ‘different’ traditions are relics of the past only practiced within small societies, uncontacted groups, in the third world. But this is not a relic of the past. It’s happening now. We don’t have to do things the way we have been doing them.”

The other ways of doing death are the focus of The Order of the Good Death, the community Doughty started, where death is treated as part of life. Where death isn’t morbid, but instead treated as a simple fact. Death is finally given its due.

“I am a believer that everything we do — the fact that we want to create, to achieve, to have children, to build buildings — is because we die,” Doughty says. “We don’t give death enough credit for the creative energy it puts into our lives.”