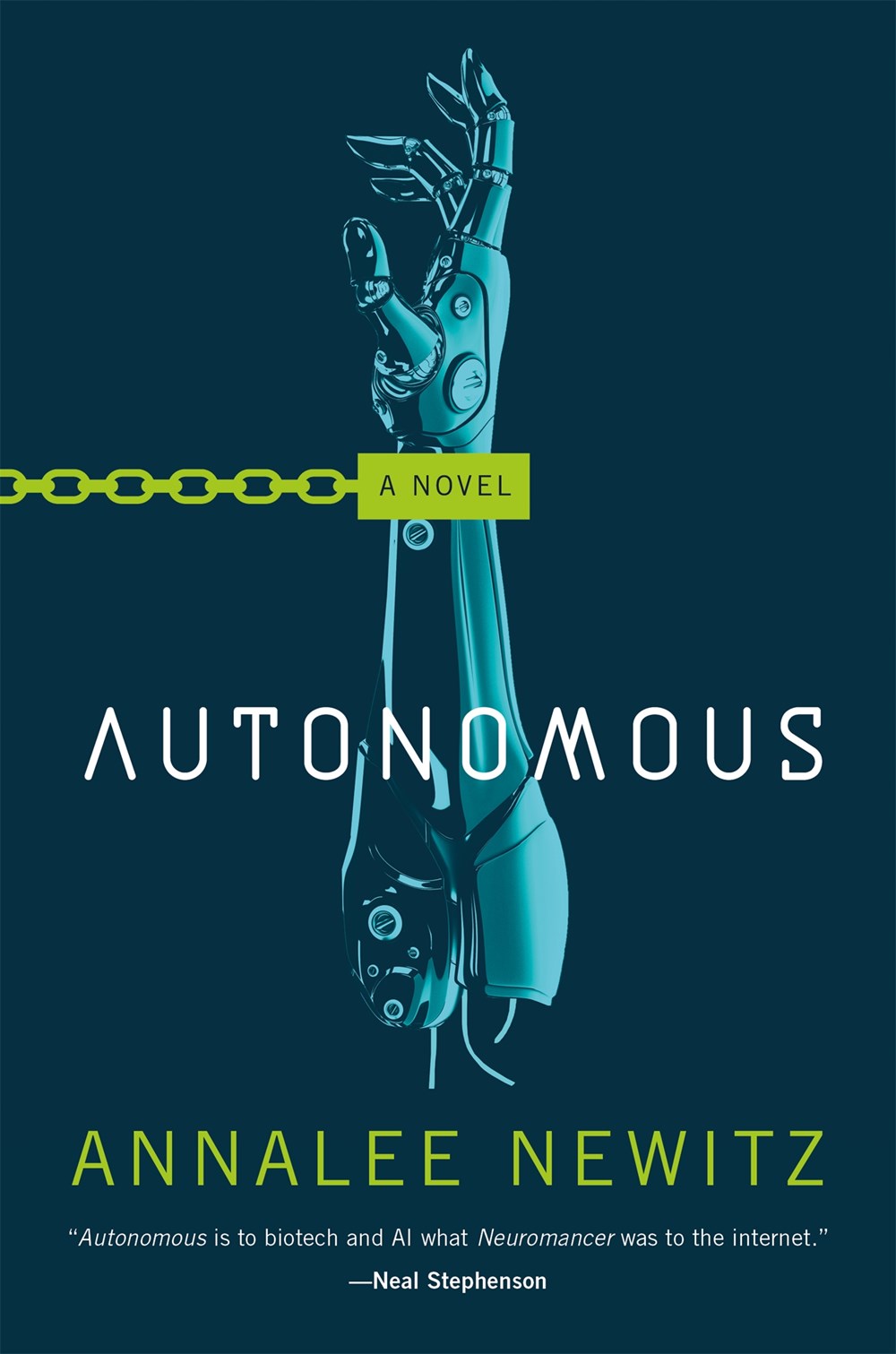 Autonomous, written by Ars Technica’s Tech Culture Editor, Annalee Newitz, opens approximately 150 years in the future, on a pirate ship in a thawed-out arctic where the Northwest Passage is traversable and a vacation resort spreads out across a swath of former permafrost.

It’s not gold that these pirates are after, however — it’s medicine. Meet Jack, a once-legitimate scientist from the Free Trade Zone (formerly North America) driven by idealism and necessity to spend her life reverse-engineering vital medicines desperately needed by a world ravaged by disease and climate change.

Her world is similar to ours in that capitalism, global economies, and Big Pharma continue to shape society. But it differs in that the development of advanced biotech has changed the very meaning of life: Robots with artificial intelligence — and containing a few human organs within their metal carapaces — now live among us, mostly as indentured servants.

We meet one of them, Paladin, when he (a pronoun he didn’t choose) is sent on a mission with Eliasz, a human military agent hired to track down Jack and put a stop to her pirating. What follows is a heart-thumping thriller informed heavily by current science that throws into question the very definitions of life, gender, and sexuality — all while imagining what might happen if climate change and the pharmaceutical industry as we know it are allowed to continue unchecked.

Newitz spoke with me about her debut novel, what her research taught her about the link between human health and climate change, and what hope she has for humanity’s future.

What inspired you to set your novel in a future where climate change has altered our planet so profoundly?

Any story about the future that’s at least a century out has to include a dramatic picture of climate change. As things like temperature and weather patterns change, we’re going to see a big shift in where people live and in life’s more mundane things, like how people get cargo from one place to another. In fact, there’s already a great debate happening now between Canada and Denmark over who gets to control this tiny island located in the Nares Strait called Hans Island. That debate is totally irrelevant now, but it will matter in fifty years when the island will likely be turned into a stopping point in an arctic shipping lane.

Any good world-building will grapple with climate change in some way.

Scientific models predict that climate change will have a domino effect on all kinds of global systems and markets. What kinds of effects do you think it will have specifically on our access to vital drugs and healthcare?

As the climate changes we’re going to see pandemics and endemics much more often, partly because through development we’re exposing ourselves to more types of viruses and bacteria than ever before. And as we move into new animal habitats, we’re going to expose ourselves to all kinds of microbes that can make us ill.

Moreover, we’re facing antibiotic resistance, which is a product of agribusiness. One of the only ways that agricultural companies can keep their animals healthy under factory-farm conditions is to pump them full of antibiotics. So we’re basically creating an army of superbacteria that are antibiotic resistant. And they are coming for us. I don’t want to sound like a zombie movie, but we are looking down the barrel at a future where we will be exposed to more and more dangerous microbes with very few therapies to cure ourselves. So we’re going to see a rise in infectious disease and deadly infections, and all of this is connected to how we’re treating the environment.

How do you think the pharmaceutical industry will respond?

We’re going to have scenarios where more and more pandemics start in developing countries where people can’t afford vaccines or therapies, and whether we help them will come down to a few business decisions. Currently, there’s a legal loophole that allows countries to manufacture a patented drug if there’s a pandemic. But that’s just one tiny concession. I strongly believe that healthcare and access to medicine should be a right, that it shouldn’t be something we have to pay exorbitantly for. Unfortunately, that’s exactly the opposite attitude of the pharmaceutical industry. We’re headed for a disaster.

Did you consult with scientists while writing this novel? What did your research turn up in terms of how scientists are exploring the links between climate change and health?

I spoke with several scientists while writing this book. When I had a solid draft, I had a geneticist and a synthetic biologist look at it, and they both had great feedback that improved not only the book’s accuracy but its story-telling. They came up with some cool ideas. I also talked to a security computer expert about how the robots’ brains would work.

I also discovered this great new open-access journal called GeoHealth that’s devoted to exploring the connection between health and the environment. The fact that a whole journal exists about this topic is a strong acknowledgement on the part of the scientific community that the only way we’ll understand global health issues is to understand how we’re interacting with soils, farm land, and development practices. What we seem to be rediscovering over and over is that the Earth and our health are part of the same system.

Your 2013 nonfiction book, Scatter, Adapt, and Remember: How Humans Will Survive a Mass Extinction, addresses global warming and other threats to human existence—and argues that we will survive them all. Your novel also suggests we’ll survive well into the future by the sheer fact that human beings continue to exist beyond the first signs of catastrophic climate change. How do you keep such a positive outlook?

It’s sad when just surviving is considered hopeful. I actually have a very pessimistic outlook for the short term, but an optimistic outlook for the long term. Remember, in the book Scatter, I talk about the next one million years. A lot of people responded to that book as a kind of tech utopianism, and I was like, no, this isn’t about how we’re going to fix all our problems tomorrow—it’s going to take a very, very long time. I talk in the book about how I believe there will be a population collapse and widespread famine and plague and that the human species will survive but only by going through a lot of setbacks before we figure out how to live sustainably on Earth. I hope we don’t go through those setbacks, that tomorrow we get some magical device. But I don’t believe that science is magic.

Annalee Newitz is an American journalist, editor, and author of fiction and nonfiction. Her journalism has appeared in Popular Science, Wired, and the San Francisco Bay Guardian. She also founded the science fiction website io9 and edited Gizmodo. She is currently Tech Culture Editor at Ars Technica. Autonomous is her first novel.