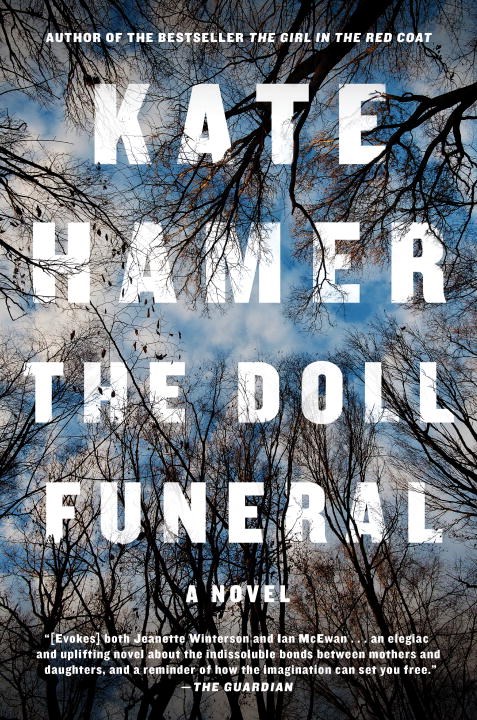 After Kate Hamer’s debut novel, The Girl in the Red Coat, won multiple awards and received an abundance of hype, her follow-up novel had a high bar to reach. Though I haven’t read her debut, her second novel, The Doll Funeral, is so captivating that I have no doubt it surpasses all expectations.

Ruby, a thirteen-year-old girl, discovers that the couple who raised her are not her real parents. She’s thrilled, as this couple has been abusive and distant her whole life; she wants nothing more than to find her real parents and feel part of a loving family.

Though Ruby’s life is dramatic enough, she has another secret: she can see spirits. It’s not as hackneyed as it sounds; Ruby doesn’t think much about the Shadow Boy that’s been a constant companion her whole life. Shadow comes and goes, and Ruby behaves as if this isn’t a supernatural occurrence. He speaks to her and sometimes keeps her safe, but otherwise he’s exactly as his name suggests: a shadow, drifting just at the edge of her vision.

For the reader, however, Shadow has a bigger role. Certain chapters are told from his point of view, told in sing-song prose reminiscent of a daydreaming child. Shadow is a tool that Hamer uses to build tension and reveal tiny pieces of backstory, and his sections are some of the loveliest of the book.

When Ruby finally breaks free of her bindings by running away, she finds herself shacking up with a group of children living in a large mansion far in the woods. Elizabeth, Tom, and Crispin’s parents have abandoned them (temporarily, they claim), and Ruby joins them in their hand-to-mouth existence by hunting rabbits, chopping firewood, and exploring their vast library for clues on how to proceed to find her real family. She’s not just an extra mouth to feed, though – the siblings’ desire for Ruby to remain with them is complex and mysterious, and when the truth comes out, it is both a terrifying betrayal and an understandable fault.

The story takes place in the 1980s, just after Ruby’s birthday, but it also jumps back in time to the 1970s when Anna, Ruby’s birth mother, finds herself pregnant and Ruby’s journey really begins. These jumps are told in third person present, a choice I found odd but not distracting. Anna’s choices slowly unfold, chapter by chapter, revealing the circumstances that transpired to bring Ruby into the world and how Shadow (and other spirits) are able to make themselves known to her. Anna’s story is heartbreaking and all too familiar, and yet it is not one of a victim; she is a strong character and her bond to Ruby is clear through small nuances expertly placed in the narrative. Anna is a burgeoning feminist, though she doesn’t know it, and her fight can be seen in Ruby’s own personality.

One of the most compelling aspects of the novel was the persistent presence of the forest. Ruby (and her mother before her) lives in the Forest of Dean, in England, and the story takes place mostly in the fall and winter seasons. Ruby is drawn to the forest, claiming she can tell the type of tree just by touching it. The atmosphere of the novel matches that of the quiet, snow-laden trees; there is a quality that is matched by the knowledge that nature is taking its course both internally and externally. The woods provide safety and danger, promise and dead ends. It is inescapable, both for the characters and the readers once you close the pages.

The writing lends itself to a thirteen-year-old’s voice, albeit one with a mature perspective and grave wisdom. Ruby’s perception might be the single-most important aspect to the novel. She is at once quirky and self-defined, but also afraid and wildly imaginative. Her coming-of-age is clearly explored on the page, and objects from both her mother’s time period and her own (including the titular doll) serve as metaphors for the shedding of innocence and the roles women play in society. And though these themes might sound political, Hamer’s deft storytelling weaves together the truth and the fiction seamlessly, leaving the message to speak for itself through the characters and their actions. There is such power behind Ruby’s words and thoughts.

In the end, Ruby comes to find that family has many different definitions. She belongs to the forest, to her birth parents, to her adoptive mother (even after their complicated past), and to her new friends. Hamer’s gorgeous prose explores every avenue of possibility when searching for long-lost blood. I’ll leave you with a quote from the novel that encapsulates a central theme: blood bonds are often indissoluble, but that doesn’t mean you can’t choose your family.

Strikers Sit Down and Win in “Midnight in Vehicle City”

“We are what our families have made us. But sometimes you can escape that. You can close a door on it and walk into another room. This room is furnished differently.”

Kate Hamer is the author of The Girl in the Red Coat, which was a Costa First Novel Award finalist, a Dagger Award finalist, an Amazon Best Book of the Year 2016 and a winner of the ELLE Lettres Readers’ Prize.

The Fire of Trauma in “The Ancient Hours”