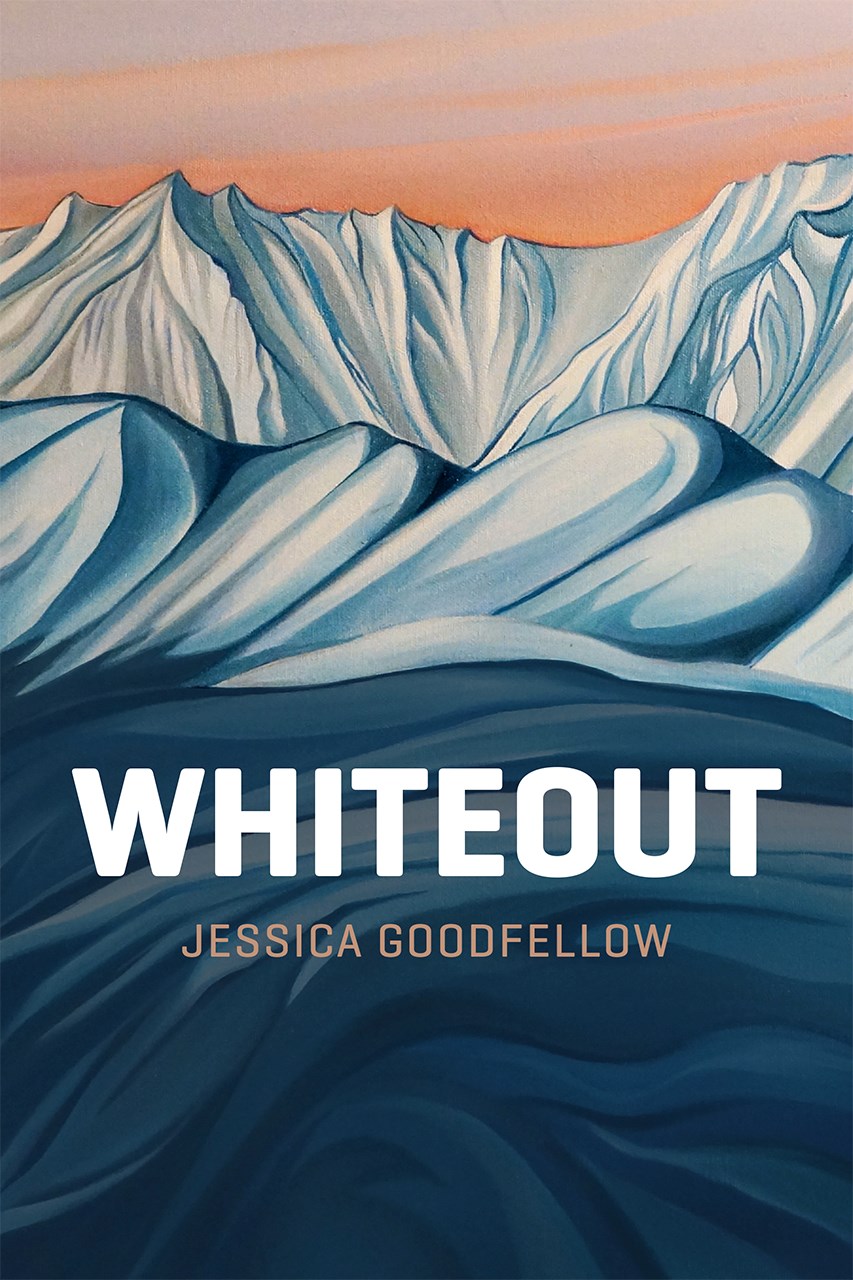 Whiteout is the third full-length collection from poet Jessica Goodfellow. It follows two others, The Insomnia’s Weather Report and Mendeleev’s Mandala, both of which received critical acclaim. Goodfellow’s latest, out from University of Alaska Press, concerns the death of her uncle, who died along with six other climbers in the 1967 Wilcox Expedition up Denali, the mountain formerly known as Mount McKinley. Her uncle was twenty-two-years old when he attempted the climb, and Jessica was just a toddler. The poems follow the stories of his death as well as the silence surrounding it. To finish the book, Goodfellow traveled to Denali herself, the highest peak in North America in Alaska’s Denali National Park and Preserve.

Sarah Blake: What an undertaking this book was! I love how much attention was given to the interior design of the book. The faded gray is gorgeous to look at, and at times my eyes feel like they’re experiencing sun bursts across the pages. It’s also heartbreaking to realize that the grayed out letters spell uncle, uncle, uncle, over and over again. Can you talk about your work with the design and with your press?

Jessica Goodfellow: As you mentioned, the word “uncle” is embedded in the titles of nine poems, such as “Uncertainty Principle,” but initially the letters spelling “uncle” were italicized. That made the title as a whole hard to read, and didn’t highlight the hidden word. I tried bolding the letters, which also failed. When friend and poet Kelly Cressio-Moeller suggested shading the letters in gray, it was a perfect solution, which the press embraced as well. Not only did it solve the technical issues, it also emphasized a ghostly presence/absence that I had been seeking. For me though, that idea had been only about the wordplay. I don’t have a good visual sense, but luckily the designers at the University of Alaska Press were able to take that element, as well as others, and make them visually effective. I’m so glad to you the grayed letters seemed like sun bursts, perhaps like sun glinting off snow.

Sarah Blake: I so appreciate how you don’t turn away from your feelings here. You let us see what you see. In the second poem in the book, when you come to that line – “the state flower of Alaska / is the alpine forget-me-not” – it’s crushing. What are your thoughts on the use of sentimentality in your work?

Jessica Goodfellow: I worried a lot about sentimentality while I was writing this book. I didn’t want to cheapen our family’s trauma by making it palatable in the way that sentimentality does, yet I have a symbol-making brain, and the use of symbols can be perceived as a kind of emotional shortcut, which is a definition of sentimentality. So I looked to other successful books about the loss of family members, particularly Beth Bachmann’s Temper, Matt Rasmussen’s Black Aperture, and Catherine Barnett’s Into Perfect Spheres Such Holes Are Pierced, which deal with a sister’s murder, a brother’s suicide, and the loss of two nieces in an airplane accident. These books skirted the problem of sentimentality by their judicious use of form and their carefully chosen symbols that were surprising and strange. The strangeness sparks a response in the brain to balance the emotional response (which can feel intentionally triggered and therefore inauthentic), and that is one antidote for sentimentality. Also, these poets left out a lot of their stories — they didn’t make a coherent narrative telling all, introducing mystery, which helped combat sentimentality.  I tried to follow their lead.

Especially in the hybrid piece “22” I worried about sentimentality in the extrapolations I was making about my uncle’s age when he died, but this is how I actually experience the world, as patterns of numbers. I know this could come across as contrived, and it is—if my uncle had been 23, I would have seen connections with that number. It’s a function of my experience of the world, not a naturally occurring phenomenon, so it is contrived, but it’s authentically contrived since that’s the way my brain automatically sees the world. Still, it’s somewhere on the scale of sentimentality, and I worried about it.

Sarah Blake: I’m pretty obsessed with the media and its tendency to dehumanize, which often boils down to language’s overall ability to dehumanize. In your poem, “Phantom Pantoum,” you have this gorgeous line, “my uncle was suddenly everywhere, epic uncle of everyone.” And a few poems later, “Uncollected” has the lines, “They never found his body, we say, and NOT they never found him.” I was so touched by your layered exploration of personhood as experienced through language. Would you talk more about that?

Jessica Goodfellow: It’s true that language, particularly these days, is used to dehumanize, but’s it’s also the case that silence can dehumanize, or at least depersonalize, even when that isn’t the intention of those who are silent. For example, because we used silence in our family to indicate a grief too onerous to be spoken of (almost to the level of a taboo), I experienced my uncle as an idea of an uncle rather than as an individual. When I told my mother (with trepidation) about this project, she said she wanted me to write about her brother’s life, not only his death, and my immediate thought was How am I supposed to do that when we never talk about him? But in fact, this project has brought out conversations among family members, the sharing of memories and stories. So it was a very conscious decision to reintroduce my uncle as a presence, to choose language over silence, to honor his personhood over his loss. I wish I could have done that to an even greater extent.

An additional complication is that my uncle’s body was not recovered, so I had to do a lot of thinking about why this is so upsetting, and about how the body relates to personhood. We’ve been raised that language is particularly powerless in addressing this subject, and while words are a poor substitute, it’s all we have. Or can have, if we choose.

Sarah Blake: You balance this extremely tough subject matter with a complete embrace of forms. It’s captivating. You’ve made up forms of your own, using parentheses sometimes, indentations, tons of repetitions, along with standard forms like the pantoum I mentioned earlier. I think my favorite is “Variate 8: Weight Bearing Heir,” which has those ending lines, “if you hadn’t had / a missing brother, I’d have / invented you / one.” What is it about form that excites you and takes you down the page?

Jessica Goodfellow: Form for me is a container for the feelings that I can hardly speak of. Form corrals chaotic emotion, gives it a limit so it can be expressed, however partially. Form sometimes comes to a poem during the process of writing, but when I don’t know what to say or how to say it, I start with a form.

Form can also recreate an experience for the reader. For example, my mother showed me this enormous plastic storage box filled with magazine covers and articles from all over the country, and I had a visceral realization for the first time about what a huge news story it had been — my uncle’s picture had been everywhere while he was nowhere. I wanted to express the inescapability and the helplessness my family felt during that time, and the way to do it was to recreate that experience with the repetitive form of the pantoum, so that the reader could look away by skipping to another line, but there it was again, and the reader could look ahead in the poem, but there it was again, inescapable. To experience that recurrence, I thought, would be more evocative than to merely say that it had happened to my family.

Sarah Blake: I’m in awe that you went to Alaska and hiked near the glacier where your uncle died. Your experience added incredibly to the poems. “Nine Views of Denali” will stick with me for a long time. I love the ending: “Behind us, the park road / winds toward the mountain / like a fuse.” I’d love to hear more about that travel and how it influenced your crafting of this book.

Jessica Goodfellow: I hope I didn’t imply somewhere that I had been anywhere near where he died — that takes some serious climbing skills to get to. I did, however, hike near where my uncle had camped, where he hiked and crossed the McKinley River to get to the mountain, and near a glacier he crossed. I even flew up in a plane and landed on a glacier on the mountain, but he died much higher up.

My older sister and I stayed in Denali National Park and Preserve in a cabin through the writer-in-residency program. When we arrived, I was about three-quarters done the manuscript, but I didn’t have a sense of it being complete, and I hadn’t found any relief through the writing. In the park, though, everywhere we went we were conscious that our uncle had been there.

Visitors to Denali have a one in three chance of seeing the mountain, but we saw it an astonishing nine days during our visit — we could look up and know his body was up there. In one of the poems I donated to the park, there are these lines: “We are / not wrong, my sister and I, to feel kindred— / kin and dread—with . . . / such a tattered landscape.” Forty-nine years after the terrible storm, the feeling of kin with the landscape finally started to overtake the feeling of dread; that was completely a function of being there, in that gorgeous and wild space my uncle had chosen. I could finish the manuscript and feel, finally, a sense of acceptance and peace.

Jessica Goodfellow is the author of The Insomniac’s Weather Report, which won the Three Candles Press First Book Prize, and Mendeleev’s Mandala, available from Mayapple Press. She is also the author of the chapbook, A Pilgrim’s Guide to Chaos in the Heartland, which won the Concrete Wolf Chapbook Competition. Whiteout is her latest.