How Humans Can Be Better Neighbors 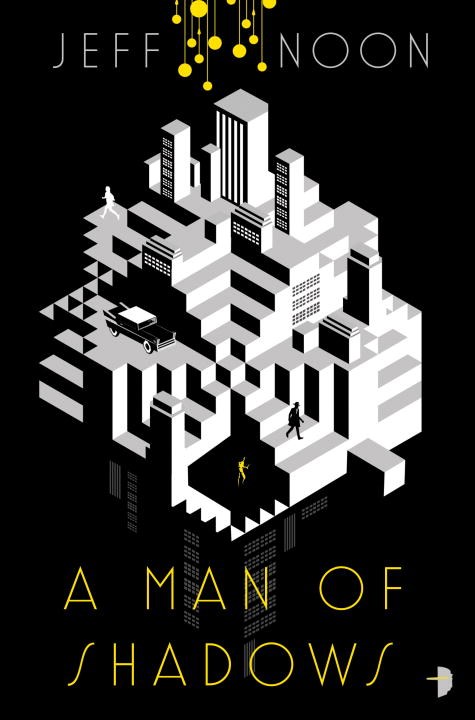 Jeff Noon’s new novel, A Man of Shadows, takes place in a city split in half and divided into permanent day and permanent night. It’s a conceit straightforward enough to be gripping, but bizarre enough to tantalize — a resistance to circadian rhythm etched directly onto urban space. The chiaroscuro effects of the city’s lightscape are significant elements of the narrative, but the novel is also about time, and at its core is a familiar story about a gumshoe, a teenage runaway, and a serial killer.

The familiarity of the plot contributes both to the novel’s successes and failures. Nyquist, the private eye protagonist, is very clearly a type. Hard-drinking, lonely, burdened by his past and with his name engraved on the door of his office in a down-market part of town, he’s a descendant of Philip Marlowe, Lew Archer, and the Continental Op. Nyquist ruefully acknowledges that his life is “like a character in a pulp crime magazine.” The beats of this kind of story —including the inexplicable physical resilience of the central character — are familiar for a reason: they work. But at the same time, the narrative’s echoes of the noir tradition occasionally fall short. Thankfully such instances are limited.

A short prologue establishes the essentials. A murder is committed in a split second within a crowded market by an invisible figure. This is Quicksilver, the serial killer whose mystery will intertwine with Nyquist’s as the story progresses. The prologue also introduces the fact that though Dayzone is an area of perpetual day, the principal obsession of its citizens is time, creating a land overflowing with clocks and watches, clocksmiths and horologists. Indeed, time itself has been vulgarly commodified in the city. There is no fixed time, but rather a proliferation of timelines, a different one for each building and district, and new ones available for purchase by anyone during each passing day. Watches have automatic settings for multiple timelines and are adjusted as people move around the city, adapting to the timelines they encounter.

Nyquist investigates the disappearance of Eleanor, daughter of the CEO of a company profiting from the creation and sale of new timelines, which leads him into an investigation of a mysterious new drug that appears to provide visions of the future. The pursuit of Eleanor is not straightforward, and is not helped by Nyquist’s personal demons about his past, which surface with increasing frequency and power as the novel continues, accelerating his growing unease about the city’s unique situation, as well as his constant sense of a kind of jetlag, demonstrated by a nervous compulsion to constantly adjust the time on his wrist.

The investigation inevitably leads Nyquist away from Dayzone into Nocturna — the city’s area of permanent night — and into the mysterious and unsettling liminal zone of Dusk. Here the disparate strands of the novel are woven together intriguingly, and the elements of day and night intersect most directly with light and dark, both literally and thematically. It is also here that A Man of Shadows leans most clearly away from the stylized realism of science fiction/noir and into the supernatural, which may not be to everyone’s taste.

There are a lot of moving parts in A Man of Shadows, and for the most part Noon does a satisfying job of keeping them moving as a piece; the plot unfolds quickly enough to prevent wondering about how any of this actually hangs together — the sagging moments are few and far between. Minor details, vague but compelling, contribute a great deal to Noon’s world-building, which is one of the great strengths of the novel. For instance, we learn that Eleanor carries a postcard from a friend on a beach in France and the mind boggles to wonder how this bizarrely circumscribed city could have come about in a world which still contains French beaches.

A Man of Shadows riffs on contemporary fears regarding the commodification of time at the hands of late capitalism, and most especially on the dystopian reality engendered by “liberation” from the eternal cycle of day-and-night. Noon’s novel reflects on the foolhardiness of this attempt in a compelling manner, and while doing so, satisfies both as a thriller and as an enigmatic urban fantasy. Whilst it may not have the precision of China Miéville’s The City & the City, to which it will inevitably be compared, A Man of Shadows holds its own, and anyone who enjoyed Miéville’s novel should consider stepping into the glare of Dayzone’s artificial sun to experience Nyquist’s investigation.

Mourning and Reminiscing in “So Forth”

Jeff Noon is a visual artist, novelist, playwright, and musician who was active on the punk scene. His first novel, Vurt, on the Arthur C. Clarke Award. His other novels include Pollen, Automated Alice, Pixel Juice, Needle in the Grove, and Channel Sk1n. A Man of Shadows is his latest.