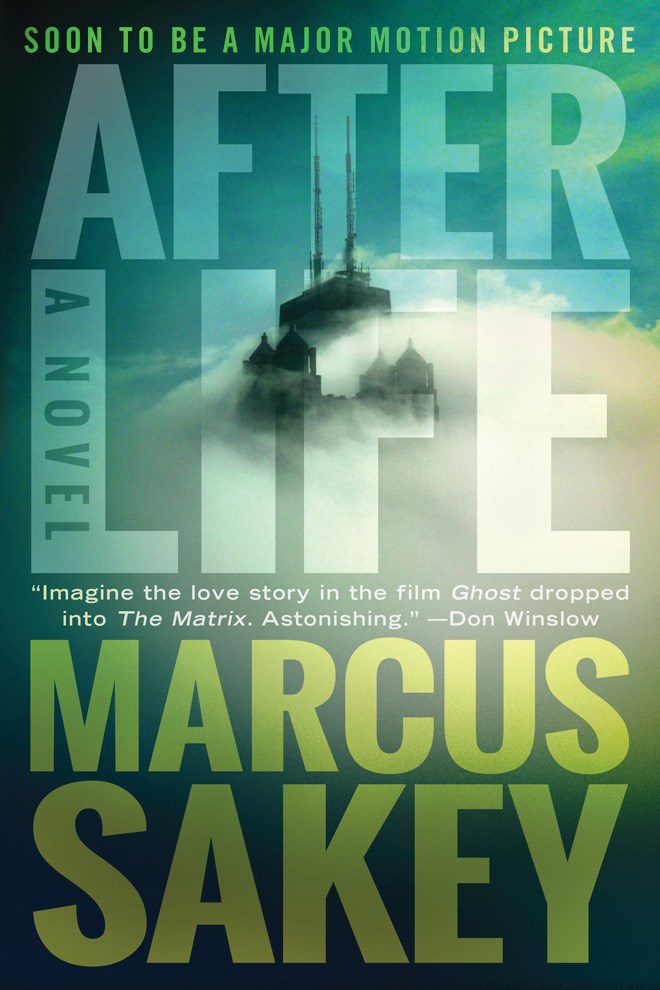 Chicago writer Marcus Sakey wrestled with his latest novel, Afterlife, for more than a decade. “This one was a beast,” he explains. But the result is an ambitious and riveting tale that traverses realms of reality.

FBI agent Will Brody, dead from a terrorist’s bomb in Chicago, wakes to find himself in an altered version of the city. He quickly must learn the rules of his new reality—his afterlife. His boss and lover—talented FBI agent Claire McCoy—mourns his loss and vows to catch his killer. The novel hurdles back and forth from the afterlife to the real world. On both planes of existence, Sakey stages an epic battle of good versus evil of mythological proportions.

I recently met Sakey for coffee on a sunny Friday morning in Roscoe Village to discuss his vision of the afterlife, his love of myths, and adapting his own work to the screen—the novel has been optioned by Ron Howard’s company Imagine Entertainment, and Sakey is writing the screenplay.

Greg Zimmerman: Since you’ve been wrestling with this novel for a decade, how did your vision of the afterlife change or evolve over time? Is it based on particular philosophies or theologies you admire?

Marcus Sakey: One of the things I fell in love with was this idea that we live our lives, and at the end of them we’re going to get the answers. So if you’re a person of faith, you believe you’re going meet your god. If you’re not, you think it’s going to be blackness, and that’s an answer too. It was fascinating to me to think, what if neither of those is right? What if you are back in a new world, very similar to the old one, but with new rules, and you still don’t have any answers. And it fired me up because I wanted to write a myth. The neat thing about myths is they can be true without being real. People know they’re not actual reality, but they have a truth to them.

Greg Zimmerman: Afterlife blends many of the styles and genres of your earlier work into one novel—there’s cop drama, a love story, and definitely elements of supernatural thriller. What were the particular challenges of writing such a cross-genre novel?

Marcus Sakey: The thing with genre—and this always bugs me a little—is what it can do to a career. Genre was made as a tool to help customers figure out which aisles they didn’t want to walk down in a bookstore. Some of it’s gotten a little calcified in ways that can be counterproductive. If I say I’m a science fiction author, which I don’t really think I am, then a large portion of readers immediately think space ships and warp jumps. I happen to love those things, but it’s not what I’m writing. So that’s my frustration with genre. If anything, this novel is a myth.

Greg Zimmerman: You do dialogue particularly well in this novel—it feels natural, and, for lack of a better word, cool. Who are some of your influences in regards to writing dialogue?

Marcus Sakey: I love good dialogue. The patron saint of good dialogue to me is Aaron Sorkin. I’m a Sorkin fanatic. I love the way he makes words dance. He’s from a theatrical background, and he credits mostly playwrights, and there’s a lot truth to that. I’m a huge Tom Stoppard fan, but his stuff is a lot more scholarly and denser than mine. There are fewer knife fights. But it’s brilliant. Elmore Leonard is another go-to patron saint.

Greg Zimmerman: What do you see as the challenges, both of adapting your own work generally, but specifically adapting this work?

Marcus Sakey: It’s something I wanted to do, and wanted to do for this book specifically. I’ve had good luck with Hollywood overall, most of my stuff has been optioned, some of them have come very close, and one of them was made. (Good People, starring Kate Hudson and James Franco.) I’ve definitely learned that I’ve got two choices. I can either do what a lot others do—just lean back and have no involvement. But not be able to complain. Or I can ask to be involved and have a seat at the table.

With this one, because it’s such an odd story, because I worked on it so hard, because the vision was really clear in my head, I went to my agent and asked if when we sold it, one of the conditions could be that I write the screenplay. Thankfully, Imagine has been fantastic for that. They loved the idea from the drop.

As far as the challenges, it’s funny that I picked this one to adapt. I picked this because I’ve got such a particular vision of it. I have written books that would be a lot easier to adapt. The challenge here is making it not creak under the weight of its own mythology; of keeping the essential story but putting it into a 110-page screenplay.

Marcus Sakey’s thrillers have been nominated for more than fifteen awards, named New York Times Editor’s Picks, and selected among Esquire‘s Top 5 Books of the Year. He lives in Chicago with his wife and daughter.