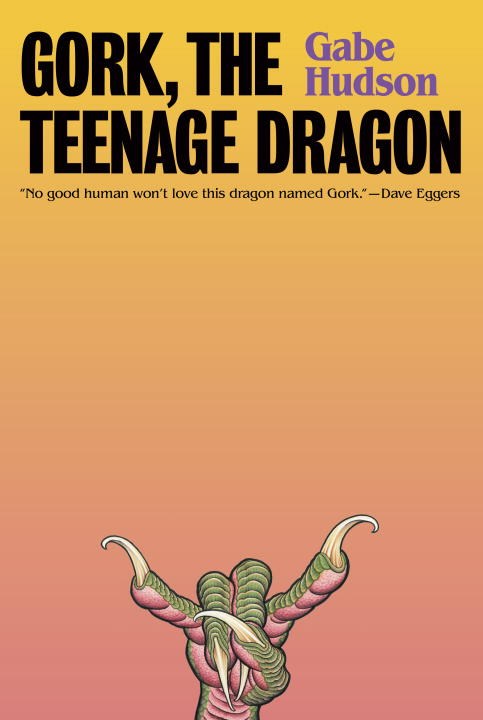 A basic literary truism: The most fun books to read are the ones the writer clearly had the most fun writing. Gork, The Teenage Dragon, Gabe Hudson’s debut novel after an acclaimed story collection (Dear. Mr. President) is a perfect example. It’s a terrifically goofy romp that’s part Harry Potter (but with dragons), part Pretty in Pink or Sixteen Candles, a little Star Wars, maybe a dash of Game of Thrones, but mostly its own unique thing. As I read, I imagined Hudson writing a particularly silly line, giggling for a solid minute, sighing, and then continuing with his work.

Take this line, as Gork the Terrible, our 16-year-old dragon protagonist who lives on the planet Blegwethia, describes his teenage dragon crush:

“I don’t mean to sound perverted here, but Runcita is stacked, and the way she bounces when she walks, it’s a wonder she’s able to keep all those glorious scaly curves moving in unison like that. It’d probably be easier to control a herd of camels, if you get my drift.”

As funny as that is, Gork the Terrible (whose nickname is Weak Sauce) is a rather melancholy fellow, er, dragon. That’s because as a cadet at the uber-macho WarWings Military Academy, he knows that being terrible is prized above all. And being the grandson of the notoriously evil Dr. Terrible, he should be as terrible as they come — it’s right there in the name! Dr. Terrible has done his all to toughen up Gork, but to little effect. Gork, cursed with a too-big heart and periodic fainting spells, doesn’t fit in—he just wants to be nice to his fellow dragons.

What’s more, the fair Runcita doesn’t even know he exists. For Gork, that portends more than just the pain of unrequited teenage dragon love. Today is Crown Day! It’s the day teenage dragons must find a Queen who will bear their progeny on a new planet, which they will subsequently conquer for all dragon-kind. (“Colonizing exoplanets is serious business,” Gork explains). If a dragon doesn’t find a Queen, that dragon is enslaved for the rest of his life. Given the odds of capturing Runcita’s affections (she’s already sent 23 would-be dragon suitors to the hospital today), Gork seems to be staring lifelong slavery in the face.

Gork has various adventures on this fateful day: He hangs with his robot dragon friends Fribby and Trenx, takes an unexpected trip to the Underworld, runs afoul of a jock dragon named Bruggert, and tries to track down evil Dr. Terrible, who has mysteriously disappeared. Effects doesn’t always follow cause in this novel, but that’s quite alright. I mean, we’re talking about teenage dragons here. Literal teenage dragons. The story’s whimsy and humor keep the plot moving.

So what’s Hudson really up to with this novel? Well, as in all the best teenage comedy movies, there is certainly a message about how the geeky Gork should stick to his scales and be true to himself. Gork tells us: “But the truth is it’s just my natural way to try and see the good in a fella.” And later, “It just never made sense to me to spit venom on a fella when he’s down.” Words to live by, those.

This fantasy is mostly good fun. There’s a bit of a shift in the second half of the novel to short, breathless chapters as the action speeds up. These often feel less like they’re urging us on and more like they’re just rushed. And some certainly could’ve been trimmed from this 400-plus-page novel. But that’s a minor complaint in the grand scheme of an overall enjoyable, hilarious, satisfyingly fun read.

Gabe Hudson is the author of Dear Mr. President, a finalist for the PEN/Hemingway Award and winner of the Sue Kaufman Prize for First Fiction from the American Academy of Arts and Letters. He was named one of Granta‘s “20 Best of Young American Novelists” and was a recipient of many awards, including the Hodder Fellowship from Princeton University, the John Hawkes Prize in Fiction from Brown University, and the Adele Steiner Burleson Award in Fiction from the University of Texas at Austin.