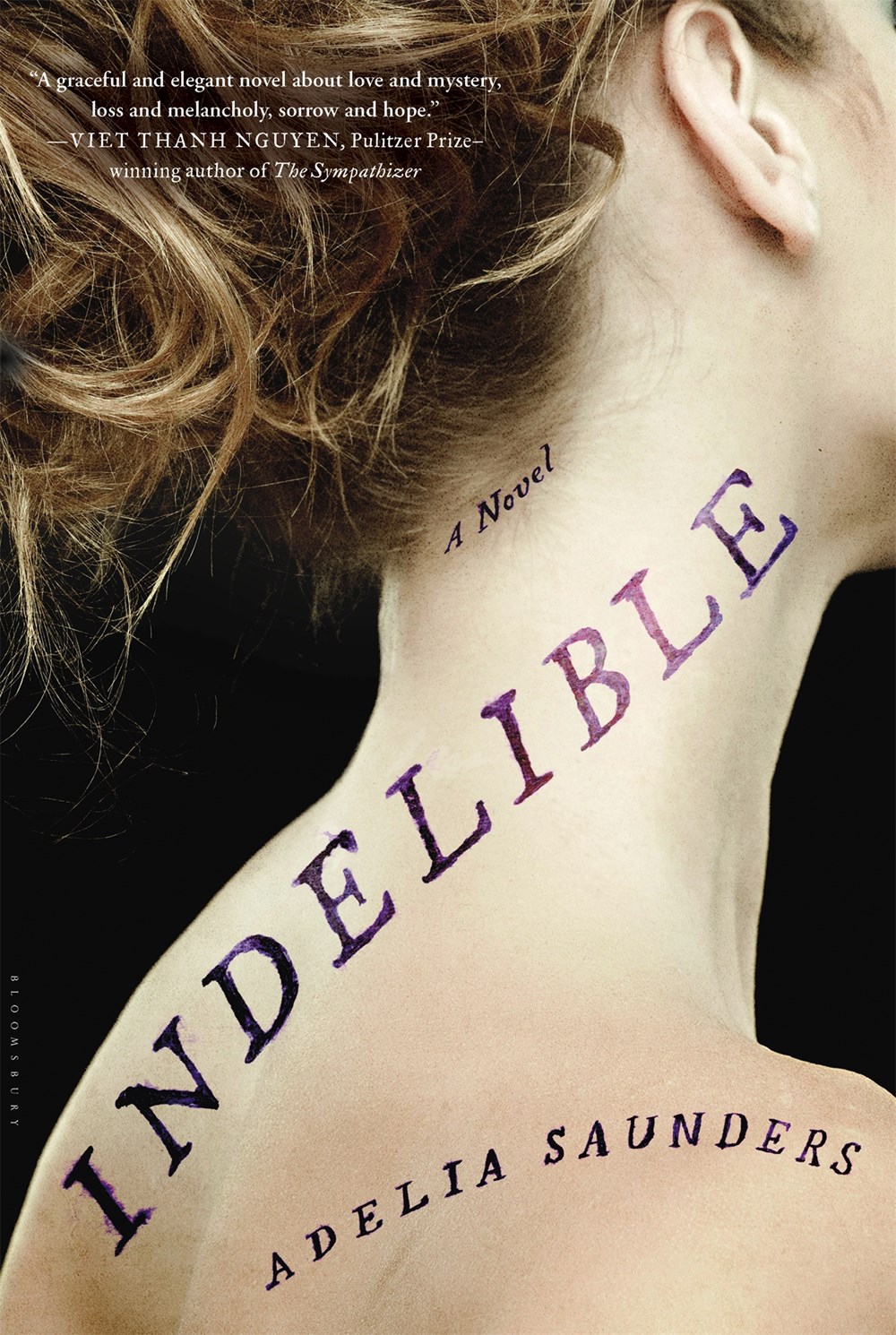 Our bodies tell many stories. The movements we make, the colors of our skin, the genders we project—our bodies say often what our lips do not. In her enthralling debut, Indelible, Adelia Saunders gives us a character with an unusual gift.

Meet Magdalena, a young Lithuanian woman living in England who was born with the ability to see writing on the skin of others. Sometimes it takes the form of key dates in a person’s lifetime and other times as entire phrases that read like clues into a person’s past, present, or future. It’s a gift that leads to more heartbreak than enlightenment—who wants to know how their loved ones will die?—leaving Magdalena to wonder whether her gift is actually a curse.

As her story line unfolds, it’s made more complex by the stories of Richard and Neil. Richard is a former high school teacher in search of information that might patch the gaps in his mottled memory of his famous mother. Neil is his diffident but charming son, an undergraduate studying history in England and Europe. Their individual quests to learn more about the past bring them to various archives around the Western world—and into Magdalena’s life. Together, the journeys of all three synthesize into a layered and lyrical novel about how history continues to affect the present and how the act of looking can bring either pleasure or pain depending on our unique interpretations.

Saunders, who visited archives in different countries, spoke with me about what inspired Indelible, how her own historical revelations have shaped her thinking, and how the politics of language continue to influence the way we view the world.

Amy Brady: There are three different plot threads that shape Indelible. How did you arrive at so many different stories, and why did you decide to include them all in your novel?

Adelia Saunders: This book started in a couple of different places—there was a Paris story that I started writing while my husband and I were living in Paris and a Lithuania story I started writing while we were visiting Vilnius, but all of it came out of a fascination with documents and the traces of reality that get left behind on paper and filed away.

In Vilnius, my husband and I were doing research in the Lithuanian archives, and it was interesting to find that all that was left of a person’s life was contained in just a few documents. You might find a birth certificate, census entries, a marriage record, a passport application—where suddenly you’d see a photo of the person, looking very ordinary, or eerily familiar, or just impossibly young—and then you might find a letter or formal petition with a cryptic word or two hinting at some darker subplot of their life, and that was it. All the really good stuff, of course, happens in the space between those data points, but it’s rarely what gets preserved.

So even though the three characters in this book have different settings and plots, the thing that connects them is the drive to connect the dots. They are all using fragments of one sort or another to construct a story they feel they need to understand.

Amy Brady: Though it’s a work of fiction, Indelible make clear just how strongly history affects the present and how our interpretation of history can change how we see ourselves and each other. Would you share a moment when a new interpretation of the past changed how you see the present?

Adelia Saunders: I think history is the single most interesting subject. We are naturally wired to love a good story, especially one that is about us or what we come from. We soak those stories in without always quite knowing we’re hearing them, and we build our lives around them. And as a result, a lot of power goes to whoever is telling the stories. I think that this happens on a personal level, and of course it happens on a much larger level too. To me it’s always interesting when the story we thought we knew suddenly crumbles and we realize there is another, very different story underneath.

So, for example, I recently learned something about the history of the place I grew up. As a kid I was totally uninterested in anything that had to do with the American West, but lately I’ve been reading about my part of southwestern Colorado. I had the strange experience of sitting in my apartment in New York City and reading in a history book that the exact piece of earth I grew up on—where my grandfather raised cattle and my dad now grows hay—had been among the parcels of Ute land that were opened to white settlement in the early 1900s when many Utes refused the government’s demand to give up their communal claims to the area. The tribe split in half because of this, and many of the parcels of land were taken by whites because individual Utes wouldn’t claim them for themselves. I read about the checkerboard effect this had on the physical layout of the Ute reservation and realized that the large patch of sagebrush next to our fields, which as a kid I called the “Indian land,” is a part of this legacy. The fence I’d wiggle under on my way to adventures there is an artifact of a long ago policy aimed at forcing the Native Americans to think and act like European farmers. It was an odd collision between history book and personal history to think that as a child I thought I knew that place, which, of course, has an entire backstory it never even occurred to me to wonder at.

Amy Brady: There’s a pattern of “looking” that emerges throughout Indelible as each main character observes someone—or something—erroneously or is the recipient of mistaken observation. It’s as if you’re offering a critique of how we look at each other and the world around us. Is there something about the act of looking that we should all be wary of?

Adelia Saunders: Even more that the act of looking, it’s believing they understand what they see that gets these characters into trouble. Because, like all of us, the people they are observing are living in private realities, which the onlookers have no idea of.

For Magdalena, the way her inner reality skews her interactions with people is pretty obvious—she has the unfortunate ability to read words on people’s skin, and to avoid it she wanders around without her glasses, trying not to let anybody get too close. Naturally no one who encounters Magdalena would guess that this is why she’s always bumping into things, and yet this personal reality shapes everything she does.

With the father and son characters Neil and Richard, the same thing is happening, though in a more real-world way. Neil’s entire relationship with his father is warped by something he saw (or thought he saw) back when he was in middle school, but Richard has no idea of this. And at the same time Richard is driven to try to find answers about his own mother’s life—but not for the reasons his son assumes.

Amy Brady: In a recent essay for Literary Hub, you write that “language is a political thing.” Your piece addresses your experience in Latvia specifically, but I wonder: Does your statement apply to native English speakers in the United States as well?

Adelia Saunders: Oh, yes! I wish I were a linguist or historian and could tell you all the ways that the English language has been an evolving political document since the Norman invasion or give an anecdote about the irony of, say, Erdoğan saying some private words to Putin in English. When I was a teenager living in Latvia I was an outsider, learning words singly and with effort, and because of this I saw language in an anthropological sort of way. It was clear that certain words carried a political charge, and in Latvia the choice of which language to speak (Latvian or Russian) had very clear political connotations.

But of course in the U.S. today language has all kinds of politics tucked in, and it seems an interesting time to consider the layers of meaning that our words accumulate. For example, going back to the ethnic politics of the place I grew up, I remember how my husband (who grew up in L.A.) thought it was weird and a little creepy that in Colorado white people were called “anglos.” I’d never thought about it before, but I realize now that it’s a term left over from a time when the three main groups in that area were Native Americans, Spanish-speaking Europeans, and English-speaking Europeans. The English-speaking ones were “anglos”—as in “Anglophone.” Right now we as a society are choosing to give certain words additional shades of meaning, and it will be interesting to see how our current political situation stamps itself into our language in ways that carry on for years to come.

Amy Brady: Indelible drives home the point that the documents we leave behind will tell the stories of our lives. You’re a writer who publishes on internet platforms (like Literary Hub) and maintains a Twitter account. What are your feelings about creating—and leaving behind—not only paper documents, but digital ones?

Adelia Saunders: I certainly think that things in digital form count as “documents” as much as the old fashioned kind. People have always put information down using the best technology they had available—although there are lots of interesting debates right now over digitizing archives so that old papers can be thrown away, and about how to effectively preserve things that only exist electronically.

But for myself, I like to have things on paper. I like to have something to hold, and there is no substitute, in my mind, for seeing the real original copies of things. One day, in the French National Archives, I was looking through a stack of papers from the Revolutionary era, and there was something held together by a pin. Though it was made with the same basic concept as a straight pin you would see today, it was completely different—it had squared edges and it was a little thicker because, I guess, an actual person had hammered it out. There’s no digital equivalent to feeling the weight of a very old pin. Then again, it’s not every day you can pop into the French National Archives. They, like many archival institutions, have done a huge service by making digital collections available to people all over the world.

As for my own records, I don’t expect anyone to ever care too much if certain snippets of my life are preserved only in digital form. Though I have been known to put papers in glass jars and bury them.

Adelia Saunders has taught in Paris, written for an independent newswire at the United Nations, and assisted an agricultural economist in Uganda. She lives in New York City. This is her first novel.

The Poems of ‘Tula’ Mesmerize Through Contradiction